Biden Win Could Spur Flurry Of Corp. Sales And Recognitions

Tax proposals outlined by Democratic presidential candidate Joe Biden could provide incentives for companies with built-in gains to unload assets before the year ends, while others seek to acquire assets while they can be fully depreciated. 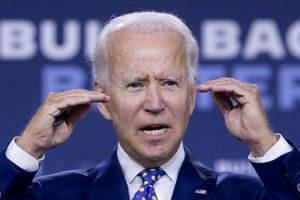 If Biden and the Democrats manage to win the White House and both chambers of Congress in November, companies would likely seek to secure the most favorable tax treatment available before the new administration could restructure the tax landscape. In the short term, that could result in companies aggressively pursuing mergers and acquisitions, and in the long run, it could lead to companies pursuing inversions overseas to shield their tax liabilities.

Specifically, Biden's proposals to increase the corporate tax rate to 28% and to perhaps extinguish the bonus depreciation included in the 2017 tax law could lead companies with gains to sell their assets before the year ends to lock in the lower corporate rate of 21%.

Similarly, other companies may be interested in buying assets during the same time frame to take advantage of bonus depreciation, which may be on the chopping block for a potential Biden administration. Still others with high incomes and capital gains may be motivated to recognize their assets this year to avoid incurring a higher capital gains rate.

The result could be "a perfect storm for some deals towards the end of the year," Buddy Sanders, a partner at Locke Lord LLP, told Law360.

Biden, the presumptive Democratic presidential nominee, has laid out a number of specific tax proposals, such as increasing the corporate tax rate to 28% and doubling the global intangible low-taxed income rate included in the Tax Cuts and Jobs Act.

In other areas, his campaign has provided less clarity about his vision. The campaign, for example, hasn't directly addressed the issue of bonus depreciation, but has stated that large swaths of the TCJA would be on the chopping block.

Biden's campaign was not immediately available for comment to clarify his position.

But all the same, if Biden were to win in November, the brief period between his victory and the start of 2021 could be a bustling time for companies pursuing mergers and acquisitions, given the confluence of two factors: Biden's pledge to raise the corporate rate and the possibility that, as president, he would do away with bonus depreciation.

One complicating factor governing the rate of businesses pursuing transactions would likely be the economic fallout from the coronavirus pandemic, he said. But even with that specter, businesses may still act assertively if they're expecting the tax landscape to shift, he said.

"If people think that we're going to pull out of this thing, or if the prices are right on some opportunities, there'll be some triggering events going on," he said, referring to the COVID-19 pandemic and its economic fallout.

Similarly, investors who are also high earners may look to realize their gains before the year's end, Sanders said. That's because Biden's pledged as president to treat long-term capital gains for those earning more than $1 million as ordinary income.

The top capital gains rate is currently 20% and the top marginal tax rate, per Biden's proposal, would be 39.6%. The difference could prove decisive, Sanders said, especially given the fact that it would be difficult to plan around incurring the full increased tax hit later down the road.

In the long term, tinkering with the corporate rate could lead more companies to explore the option of pursuing inversions abroad to limit their tax liabilities, Troy Lewis, manager at Lewis & Associates CPAs and former chairman of the American Institute of Certified Public Accountants' tax executive committee, told Law360.

While the corporate rate would likely be a primary concern, and motivating factor, there are various incentives and punitive measures the government has employed to keep American businesses domiciled domestically, Ron Scharnberg, partner at Baker Botts LLP, told Law360.

"There could be strategic opportunities if you're involved in certain transactions where you may be able to, within all of the rules that apply on the inversion side, effectively re-domicile or move the headquarters outside of the United States that could potentially help lower the overall effective tax rate," he said. "But it's a combination of factors that come into play."

By the same token, 2020 has so far proved to be an anomalous year, and companies of all stripes could be experiencing losses, S. Starling Marshall, a partner in Crowell & Moring LLP's tax and litigation groups, told Law360.

It likely wouldn't be an automatic decision by those types of companies to re-domicile abroad and miss out on available tax benefits in the form of net operating loss carryforwards, she said, even if the corporate rate were increased under a Biden administration.

"You're going to have a lot of companies that will experience some losses in 2020 and they'll want to maximize their ability to use those to offset future liability," she said.

Still, the temptation to domicile abroad could be baked into the cake under a Biden administration, Lewis told Law360. In short, the difference between 21% and 28% could prove decisive for companies, in spite of the carrots and sticks the government has laid out for them.

"You're taking geopolitical risk and reputational risk" if you decide to domicile abroad, he said. When the former U.S. corporate rate was 35% and those of other countries didn't exceed 20%, companies may have concluded that the risk was worth the benefits, he said.

When the U.S. rate dropped to 21%, and was considered by those organizations to be comparable to the tax rates of their foreign competitors, then the benefits of domiciling abroad evaporated. But if the U.S. were to increase its rate to 28%, that calculus might change, Lewis said.

"You're undoing one of the key components of the international reform if you bring it back up," he said. "All of a sudden, the foreign competition has a lot more room to work than they did, say, six months earlier under a different administration."