The coronavirus downturn in trade has taken "some of the teeth" out of the U.S. threat to impose sanctions on countries that enact a digital services tax, a top official for the Organization for Economic Cooperation and Development said Thursday. 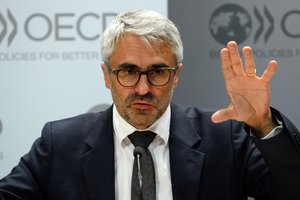 Saint-Amans spoke at a webinar co-hosted by the University of North Carolina Tax Center and the Tax Policy Center, a Washington, D.C.-based think tank co-founded by the Brookings Institution and the Urban Institute.