Hundreds of New York tenants and their advocates rallied outside of largely empty housing courts on Monday, demanding Gov. Andrew Cuomo extend a moratorium on evictions as the state welcomed new cases for the first time since mid-March. 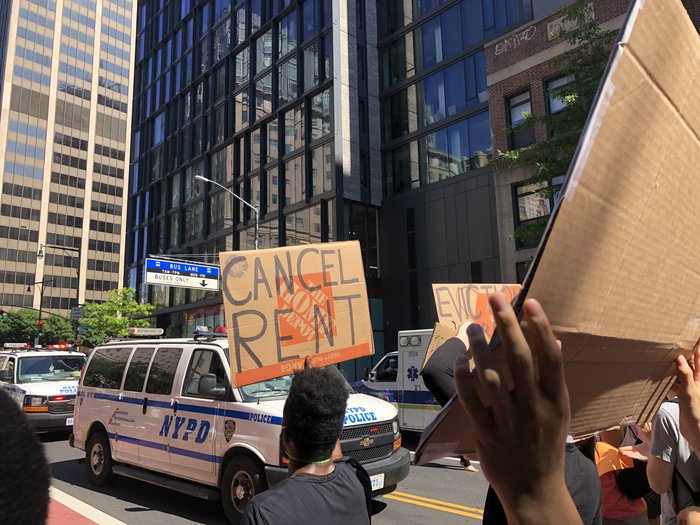 Speakers condemned Cuomo's decision to narrow his eviction moratorium as of Saturday and urged the governor to prohibit evictions through 2020 and cancel rent payments for the duration of the coronavirus pandemic, chanting, "Hey, hey! Ho, ho! All evictions have got to go!"

But tenants also took time to celebrate recent news from the state Office of Court Administration that new eviction cases will be stayed in the near-term.

Esteban Girón, an organizer with the Crown Heights Tenant Union, told the crowd outside Brooklyn Housing Court about guidance issued last week by the OCA pausing all new eviction cases and the execution of warrants at least through July 6.

"For the next few weeks, we have won a victory," he said, to loud cheers.

"This eviction moratorium has been extended piecemeal, and every single time it's a little sneakier. It's a little more complicated," added Alexander Roos, a tenant lawyer and member of the Association of Legal Aid Attorneys. "What they really want to do is they want to start slow-rolling it. And the only thing that's going to stop it is people in the streets."

Meanwhile, landlord attorneys have condemned the latest guidance from the courts as overly burdensome.

"I think it effectively shuts the housing court," Meryl Wenig, partner with Wenig Saltiel LLP, told Law360 on Friday. "You can file [a case], but in my world to file it and not have a court date, and not know when we can hear it, is ice in the wintertime."

"It's just for optics. It's really not opening," echoed Luise Barrack, head of litigation for Rosenberg & Estis PC. She predicted that some attorneys may choose to file eviction cases in the Supreme Court, which shares jurisdiction with housing court, even though it has not historically taken up many tenant-landlord disputes.

Both Wenig and Nativ Winiarsky, partner with Kucker Marino Winiarsky & Bittens LLP, alluded to possible constitutional challenges to the courts' directives, alleging a due process violation.

"To essentially render the housing court inoperable to the point where a landlord cannot justly reclaim his property cannot be allowed to remain unchecked," Winiarsky said.

Through Aug. 20, Cuomo has ordered that certain tenants eligible for unemployment, or who have experienced financial hardship related to COVID-19, cannot be evicted. How attorneys will determine who this applies to has been cause for confusion.

"I feel like that's a really hard thing to qualify," said Yaya Julien, a renter from the Clinton Hill neighborhood in Brooklyn who attended Monday's rally and said she is out of work as a medical scribe. "Pretty much everyone has been affected by this, and I don't think it's really fair to narrow the scope."

Layered on top of this order, new guidance from Chief Administrative Judge Lawrence K. Marks says eviction cases must be filed by mail. Landlords must also provide an affidavit confirming that they have reviewed existing state and federal restrictions on evictions and believe "in good faith" that a case can proceed.

"Whether or not an answer is filed by the tenant, the proceeding will be stayed until further notice," DiFiore said.

Following Monday's rally outside of the Brooklyn courthouse at 141 Livingston Street, tenants and attorneys marched around the block with signs saying "Cancel Rent" and "People's Lives > Landlord Profit."

Nnamdia Gooding, a tenant attorney with Brooklyn Legal Services, told Law360 that she had taken off work to protest. She connected the tenant movement to the movement against racism and police brutality.

A report published on Monday by the Community Service Society found that half of Black tenant households in New York fell behind on their rent in late May and early June, compared to 6% of white tenant households.

"If Cuomo's saying that Black lives matter, then he should know that Black and brown people are more likely to be evicted," Gooding said, speaking in her personal capacity. "He needs to do something to assist tenants who simply cannot afford to pay back three months of arrears."