Washington - President Donald Trump on Saturday nominated Judge Amy Coney Barrett, a prominent conservative law professor who serves on the Seventh Circuit, as Justice Ruth Bader Ginsburg's replacement on the U.S. Supreme Court — a move that could lurch the court even further to the right.

President Trump introduced Judge Barrett, 48, as his nominee in a ceremony at the White House on Saturday. 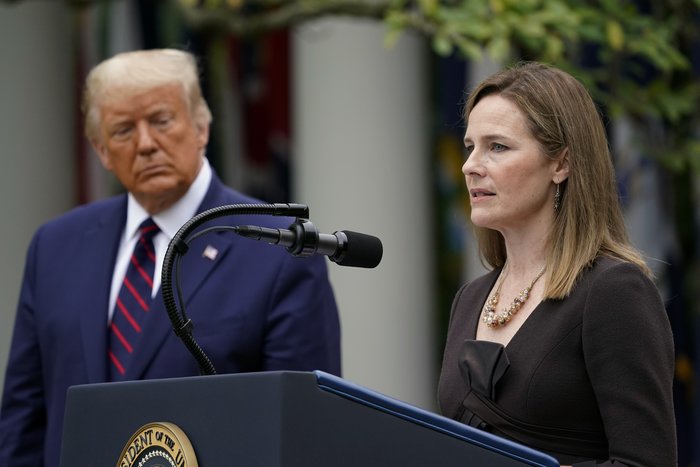 Judge Amy Coney Barrett speaks after President Donald Trump announced her as his nominee to the Supreme Court, in the Rose Garden at the White House on Saturday. (AP Photo/Alex Brandon)

"Today it is my honor to nominate one of our nation's most brilliant and gifted legal minds to the Supreme Court," Trump said in a speech in the Rose Garden, announcing his third pick to the high court. "She is a woman of unparalleled achievement, towering intellect, sterling credentials and unyielding loyalty to the Constitution: Judge Amy Coney Barrett."

Trump said Judge Barrett will "decide cases based on the text of the Constitution as written."

"Should I be confirmed, I will be mindful of who came before me," she said, noting that flags are still at half-staff in memory of the late justice, who was a pioneering women's rights advocate before joining the bench. "She not only broke glass ceilings, she smashed them."

Judge Barrett then laid out her conservative judicial philosophy, promising to adhere to the text of the Constitution and the laws. Speaking of the late Justice Antonin Scalia, for whom she clerked, she said, "His judicial philosophy is mine too. A judge must apply the law as written.

Her nomination to become the 103rd associate justice kicks off a bitter political battle as Republicans race to fill Justice Ginsburg's seat before the presidential election, which is just 38 days away. Republicans currently enjoy a 53-seat majority in the Senate, meaning they can lose up to three votes and still confirm Judge Barrett with Vice President Mike Pence's vote as the tie-breaker.

If confirmed, Judge Barrett would give Republicans a supermajority on the Supreme Court and leave only three justices — Justices Stephen Breyer, Sonia Sotomayor and Elena Kagan — appointed by Democrats.

A Catholic mother of seven, Judge Barrett made a name for herself as a professor at University of Notre Dame, the Law School, where she published widely on topics of constitutional law, statutory interpretation and the role of precedent. In her speeches and writings, Judge Barrett expounds on the virtues of originalism and textualism, conservative judicial doctrines championed by Justice Scalia, whom she clerked for during the 1998 Supreme Court term.

Well liked by the conservative legal establishment, Judge Barrett saw her stock rise dramatically after Democrats seized on her Catholic faith during her Senate confirmation to question whether she could be an impartial judge on the Seventh Circuit. She was ultimately confirmed in October 2017 and has now served on the appeals court for nearly three years.

Plaudits poured in Saturday from all corners of the conservative legal establishment.

"President Trump promised to appoint justices in the mold of Scalia and [Clarence] Thomas," said Carrie Severino of the well-heeled Judicial Crisis Network. "He has kept that promise and I look forward to supporting Judge Barrett's confirmation."

To do just that, Severino's organization announced Saturday that it "expects to spend at least $10 million" on political ads in key states across the country.

"With the appointment of a Justice Barrett as his third Supreme Court pick, President Trump will transform the 5-4 John Roberts court to the 6-3 Clarence Thomas court," Davis said.

Judge Barrett's conservative bona fides have rung alarm bells for progressives now facing the prospect of losing the 27-year anchor of the Supreme Court's liberal wing to a longtime member of the Federalist Society they expect will be hostile to abortion rights, workers, LGBTQ rights and more.

"She will be an extreme far-right justice on the Supreme Court if she is confirmed," said Elliot Mincberg, who has studied Judge Barrett's record for the progressive group People for the American Way. 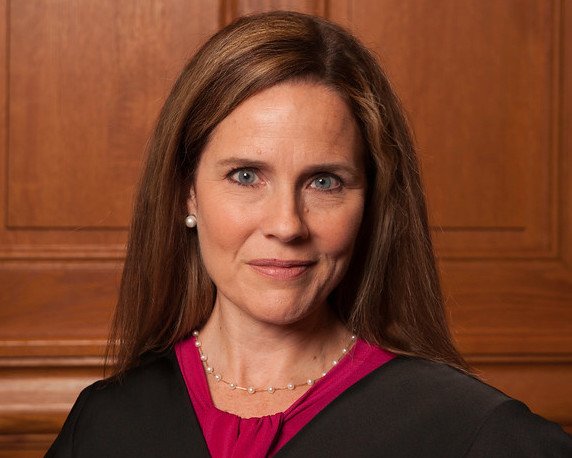 Replacing Justice Ginsburg with Judge Barrett would be a "huge swing to the right," Mincberg said. "Much more so than replacing Scalia with [Justice Neil] Gorsuch, or even [Justice Anthony] Kennedy with [Justice Brett] Kavanaugh."

"It would be hard to find an issue where Barrett agrees with Ginsburg's views," he said. "And vice versa, I suspect."

Though she hasn't been on the Seventh Circuit long, she has already carved out a strong conservative track record on abortion and gun rights.

In 2018, Judge Barrett dissented when the Seventh Circuit refused to reconsider a decision striking down a controversial statute that made it illegal to perform an abortion because of the fetus' sex, race or disability.

Reproductive rights groups decried the nomination Saturday. "Trump has nominated a replacement who would gut Justice Ginsburg's legacy and turn back five decades of advancement for reproductive rights," said Nancy Northrup, the president of the Center for Reproductive Rights.

In 2019, she dissented to a decision by two other Republican appointees and argued that a federal law barring felons from owning guns was unconstitutional as applied in that case. Her colleagues, she said, were treating the Second Amendment as a "second class right."

Judge Barrett has also voted numerous times against civil plaintiffs, whether denying breach of contract claims against a life insurance company or tossing a suit against a debt collector under the Fair Debt Collection Practices Act.

Depending on how soon she could be confirmed, Judge Barrett could provide the crucial swing vote to rule that the Affordable Care Act is unconstitutional in a pending case set to be heard on Nov. 10. In a 2017 law review article, Judge Barrett criticized Chief Justice John Roberts' 2012 decision upholding the law, saying he "pushed the Affordable Care Act beyond its plausible meaning to save the statute."

"Let's be clear what's at stake: health insurance for millions of Americans and life-saving protections for the 129 million people with pre-existing conditions," Sen. Dianne Feinstein, D-Calif., said in a statement regarding the vacancy Tuesday.

'One Ought to be an Originalist'

Born in New Orleans in 1972, Judge Barrett grew up the oldest of seven children whose father was an attorney for the Shell Oil Co. After earning her bachelor's degree in English Literature from Rhodes College in 1994, she attended The Law School at Notre Dame, where she received her degree in 1997. She worked as a summer associate at Covington & Burling LLP in 1997 before winning a clerkship with D.C. Circuit Judge Laurence H. Silberman and then one with Justice Scalia during the 1998-1999 Supreme Court term.

Judge Barrett worked a stint in private practice following her clerkships and then began a long career in academia that eventually won her a seat on the Seventh Circuit. Since 2002, she has been a professor at Notre Dame's law school, where she teaches classes on constitutional law, civil procedure, evidence, federal courts and statutory interpretation.

She has published a slew of law review articles over the years expounding on her conservative judicial philosophy. She is also a longtime member of the Federalist Society, the legal network that has had an outsized influence on Trump's judicial selections and counts most of the conservative justices on the court among its ranks.

Judge Barrett explained her commitment to originalism in a 2019 speech to the New Orleans Lawyers Chapter of the Federalist Society. "I think one ought to be an originalist because the Constitution, no less than a statute, is law," she said. "It's not merely a statement of our aspirations as some have described it."

Judge Barrett defended the idea that the Constitution has a "fixed" meaning that does not change with time.

"Its meaning was fixed at the time it was written and formally adopted and it stays the same until it is lawfully changed," she said. "The content of the commitment does not change even if popular attitudes wax and wane. Even if a majority of the country thinks that free speech is passé, the First Amendment stands."