If the U.S. enacted a wealth tax today, the new global environment of tax transparency and information flows — as well as existing reporting rules like the Foreign Account Tax Compliance Act — could stem the outflow of cash that doomed similar European efforts. 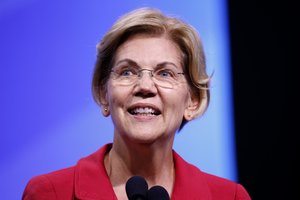 The wealth tax proposed by Sen. Elizabeth Warren could raise $2.75 trillion over 10 years according to one estimate, while critics say it would raise a fraction of that. (AP)

Critics of the wealth tax idea, which is a cornerstone of the 2020 Democratic presidential campaign of Sen. Elizabeth Warren of Massachusetts, claim it would be an administrative mess. And while the notion of taxing assets annually does raise many logistical questions, its supporters say the new global landscape of tax transparency and information flows would give a wealth tax a new, strong foundation. Many independent experts agree.

"I believe that the U.S. government has won the war over Americans having foreign financial assets," said Scott Michel of Caplin & Drysdale Chtd., who specializes in tax enforcement and controversy.

The wealth tax has surfaced following a wave of populism around the globe, and growing political focus on inequality in the U.S. and abroad. Supporters say that higher taxes on income or consumption aren't enough; to truly make the tax system progressive, the U.S. Internal Revenue Service must be empowered to go after the vast sums of wealth individuals can accumulate.

Warren's proposal would levy a 2% tax on household net worth above $50 million, and a 3% tax on net worth over $1 billion. While those amounts may seem paltry, it would add up to billions of lost dollars for some wealthy taxpayers, and could raise $2.75 trillion over 10 years, according to economists Gabriel Zucman and Emmanuel Saez, who have advised the Warren campaign.

Despite those eye-popping numbers, additional revenue for government isn't necessarily the point of a wealth tax. Zucman and Saez argue it will ultimately help level the economic playing field between the poor and the very rich, and will even restore faith in the political process by depriving well-heeled donors of dollars they could use for influence.

But the proposal, as well as Zucman and Saez's work, has drawn significant criticism from across the spectrum. Former Treasury Secretary Larry Summers and Natasha Sarin, a professor at the University of Pennsylvania Law School, using revenue figures from the U.S. estate tax, estimate that a wealth tax could raise as little as 15% of Zucman and Saez's prediction.

"As a matter of arithmetic, a great deal of the wealth that Saez and Zucman assume will be hit by their wealth tax is escaping the estate tax," Summers and Sarin wrote in an April Washington Post op-ed. "If our suspicion is correct, such a wealth tax will not yield the revenue that its proponents hope for, and that when actual scorekeepers score actual proposals, their estimates will disappoint advocates."

Evasion, or outright expatriation, were a primary reason why many other countries abandoned their wealth taxes, Summers and Sarin argued. Of the 12 countries in the Organization for Economic Cooperation and Development that enacted wealth taxes, only three continue to collect them today. Most recently, France narrowed its wealth tax in 2017 to include only real estate.

Saez and Zucman ultimately published a follow-up paper on Sept. 5, outlining further their case for a wealth tax. They argue that the administrative concerns are overblown, and that a fully funded and staffed IRS could track down the assets subject to a wealth tax.

They also argue that comparisons to Europe are flawed — the U.S. has taxed worldwide income of its citizens since the dawn of the income tax, and would initiate a wealth tax in a stronger position than France or Italy. In addition, the 2010 enactment of FATCA, which requires foreign banks to submit financial data about U.S. taxpayers with the IRS, sparked a global movement towards regular information exchange and tax transparency.

"The U.S. has taken a bold step in the enforcement direction with FATCA in 2010 that imposes steep penalties on foreign financial institutions that fail to report accounts of U.S. residents to the U.S. tax authorities," Zucman and Saez wrote. "It is possible to curb offshore tax evasion because such evasion is done through large and sophisticated financial institutions that keep records and know the ultimate owners of the accounts."

In the past decade, the world has become smaller, more centralized and interconnected to a degree once unthinkable. Large-scale tax evasion still occurs, and more would be possible if the incentives were increased. But with financial firms now sharing information with the U.S. and foreign entities on a regular, systematic basis, those hoping to move their assets to a hidden vault offshore must tiptoe around countless reporting regimes and carefully avoid a paper trail — with potential huge consequences for a misstep.

Most people would rather sleep at night, according to Michel at Caplin & Drysdale.

"If somebody wants to evade the wealth tax, they're going to have to focus their efforts on obtaining assets outside the United States in a way where tracing those assets is more difficult," Michel said. "I think that's going to be really hard for people to do."

FATCA requires foreign banks to submit to the IRS names, tax identification numbers, addresses and other financial data about U.S. taxpayers, or face a 30% withholding tax on income from the U.S., among other sanctions. Because almost all banks around the world carry U.S. dollars or hold interest-bearing U.S. bonds, FATCA amounts to a global reporting requirement. Banks also must require their U.S. customers to sign a waiver of secrecy, allowing them to send the IRS their records upon request.

The reporting rules are widespread and flexible enough to adapt to new or evolving methods of evasion. Aside from identifying information about the taxpayer, banks also must report the beneficial owner of an entity — who ultimately benefits from a shell company or fund.

U.S. taxpayers found to have violated FATCA can face penalties of up to 40% of the underreported amount. If that's not scary enough, a taxpayer faces as much as five years in prison for intentionally failing to file an accurate Report of Foreign Bank and Financial Accounts or FBAR, an additional IRS reporting requirement.

"I'd rather have some money and be free, than have a lot of money and be in jail," said William Byrnes, a professor of tax law at Texas A&M University School of Law.

And in passing a wealth tax, Congress could enact even harsher penalties and further reporting requirements to bolster FATCA. It could also join the common reporting standard, a global initiative modeled on FATCA in which all nations reciprocate on information requests.

"A wealth tax is viable, from an enforcement standpoint," said Steve Rosenthal, a former legislative counsel at the Joint Committee on Taxation and a senior fellow at the Tax Policy Center, a D.C.-based think tank. "I think the developments in information technology, information sharing and information reporting in the tax area have been pretty dramatic, all of which will help facilitate the wealth tax."

But few would argue that FATCA has eliminated tax evasion. While the law has been in place for nearly a decade, the IRS is still in the early stages of sorting through the mountains of data it's received. And accurate data on how much has been evaded in the past can be hard to come by.

"If an American citizen has a bunch of valuable art in a private vault in Vaduz, it is very hard for us to find it, FATCA notwithstanding," said Edward Zelinsky, a professor of tax at Yeshiva University's Benjamin N. Cardozo School of Law. "If we do find it, then there is a tremendous debate for what these things are worth. In that sense, the problems that are caused by the enforcement of the wealth tax, we'd have this problem under the estate tax."

If a taxpayer wanted to store valuables offshore, he or she would need to figure out how to obtain them in a way that didn't involve large payments to or from a financial institution. And the taxpayer would likely want to insure them, leading to another potential tripwire. And, of course, he or she might eventually want to access some of these assets, requiring a repeat of the whole process. But it would certainly be possible, if difficult.

"The lengths to which people are willing to risk their underlying assets to avoid paying tax are mind-bending," Michel said.

Indeed, Zucman's own 2015 book, "The Hidden Wealth of Nations," outlines how he feels FATCA has come up short.

He noted that, in theory, banks could decide to attract investment from wealthy individuals by choosing not to comply with FATCA requirements and accept the 30% withholding charges.

More fundamentally, FATCA doesn't have a good mechanism to guard against outright fraud by the banks themselves, he claimed.

"The fundamental problem is that authorities have no means to verify that offshore bankers are respecting the spirit — or the letter — of international regulations," Zucman wrote. "All the steps being taken today and the plans devised for the future are based on the idea that we can trust bankers to carry out their obligations. However, this belief is, to say the least, problematic."

Sarin of Penn Law said Zucman's earlier observations about FATCA undercut his current contention that it could serve as a backstop for a wealth tax.

"It's not that we can't come up with better ways," Sarin said. "It's just that even the most radical, best approaches that they marshal for how we can make sure there isn't so much evasion actually within them have a record of having evasion."

Zucman said he's always recognized that FATCA was a game-changer for international tax reporting. He said it could be strengthened by increased funding of the IRS and harsher penalties on banks that don't comply, including revocation of their banking licenses.

"I think the effectiveness of FATCA all depends on whether there's the political will to make it work," he wrote in an email to Law360.