In the coming weeks, Senate Finance Committee Chairman Chuck Grassley, R-Iowa, will gauge whether to seek a stimulus measure like a payroll tax cut to counter the economic impact of the new coronavirus, Grassley said in an interview with Law360. 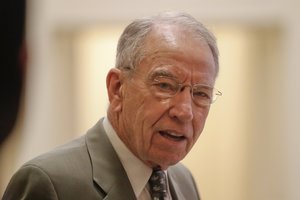 Sen. Chuck Grassley, R-Iowa, said he planned to use his remaining 10 months as chairman of the Senate Finance Committee to advance a highway bill and reach a deal to extend expiring tax incentives, while monitoring the economic effects of the new coronavirus. (AP)

While Grassley did not embrace President Donald Trump's call for House Democrats to propose a one-year payroll tax cut, he said such a measure could be advanced later if there were signs of economic problems even after the Federal Reserve's recent half-percentage-point cut in its benchmark interest rate.

In a wide-ranging interview, he also said he planned to use the remaining 10 months of his chairmanship — capped at three terms by GOP rules — to advance a highway bill and cut a deal on extensions of expiring tax incentives, in addition to monitoring the economic effects of the coronavirus' fallout.

"I would have to see more deterioration in the economy before I'd look to some sort of tax-related stimulus," Grassley said.

The top Senate tax writer said any coronavirus tax package could "at least start out with a timid approach of a percentage or two of tax," referring to a payroll tax cut similar to a 2010 law

that sliced the Social Security tax withholding rate from 6.2% to 4.2% for employees.

"I'm sure if it was necessary to be done. It would have the full support of the House of Representatives," Grassley said.

But Michael Zona, a Grassley spokesman, said Monday that Grassley was "exploring the possibility of targeted tax relief measures that could provide a timely and effective response to the coronavirus."

Zona said "several options within the committee's jurisdiction are being considered as we learn more about the effects on specific industries and the overall economy."

Other senior tax writers in both parties said it was unclear whether there would be consensus support for a tax measure to address looming effects of the coronavirus.

Sen. Pat Roberts, R-Kan., said signs of economic trouble would be needed to develop any tax measure for dealing with problems caused by the coronavirus.

"If it reaches that point, I'm sure there would be enough support to do it. But a tax bill to get it done is very difficult," Roberts said.

Sen. Benjamin L. Cardin, D-Md., said it was unclear whether tax measures aimed at spurring consumer spending such as a payroll tax cut would "mean much, because right now people are staying indoors" to avoid the coronavirus.

"We've got to do things that are smart," Cardin told Law360. "We're more concerned about protecting salaries of people who can't work, parents who can't work because their children can't go to school. We're more concerned about small businesses and what's happening to small businesses. We would like to target those being damaged by the coronavirus,"

Grassley also said he still hoped this year to help finance a $287 billion five-year highway bill, S. 2302, which he said could provide a boost to the economy. He said he had eliminated a proposal framed by Sen. John Cornyn, R-Texas, for a vehicle-miles tax on commercial trucks because it "did not have any support" among his panel's members.

After recent talks with Cornyn and Environment and Public Works Chairman John Barrasso, R-Wyo., Grassley said he and the other two lawmakers "came to the conclusion that if we're going to be able to finance infrastructure, it's going to be by kind of a conglomeration of various sources of revenue." Among items under discussion are a Barrasso-backed electric vehicle user fee and a proposal to index to inflation the 18.4-cent-per-gallon gasoline tax and increases in existing user fees under several committees' jurisdictions.

Grassley said he and Barrasso would discuss an infrastructure financing framework with Senate Majority Leader Mitch McConnell, R-Ky., "because he's going to have to coordinate this if you've got revenue coming out" related to activities under the purview of the Banking, Housing and Urban Affairs Committee and the Commerce, Science and Transportation Committee.

Trump signed in December, Grassley said, but he predicted there would be another push for a deal on a renewal of extensions for 33 temporary tax incentives expiring at the end of 2020 as the November elections approach and, possibly, in a post-election session.

"If there's the usual interest in extending the extenders, that will come up at the end of the year," Grassley said.

He said he also hoped to develop a broader package with the support of the White House, including proposals to make some of the items permanent and to eliminate or reshape others.

Grassley, who has a long history of cutting bipartisan tax deals, stressed his desire to work on a few more agreements with potential partners such as House Ways and Means Committee Chairman Richard Neal, D-Mass., including legislation to address financially troubled multiemployer pension funds. Such legislation could be a vehicle for other items, including bipartisan proposals for retirement savings incentives similar to those included in the year-end tax package.

Grassley said he hoped to persuade Neal to move away from a contentious $48.5 billion House-passed plan, H.R. 397, known as the Butch Lewis Act, to provide bailout loans to multiemployer pension funds.

He said he believed the blueprint he had developed with Sen. Lamar Alexander, R-Tenn., chairman of the Health, Education, Labor and Pensions Committee, was the only plan that might attract sufficient votes to overcome a potential Senate filibuster. That plan includes higher flat-rate premiums per plan participant to the Pension Benefit Guaranty Corp. and a co-payment by retirees.

"We are trying to sell it to get bipartisan support for it. Some of the language is drafted. We are trying to work with the stakeholders," Grassley said, referring to his proposal with Alexander.

As he tries to build support for the draft pension bill, Grassley said he would keep trying to advance a package of technical corrections to the Tax Cuts and Jobs Act

, but he continued to push back against demands by Democrats, including Neal, for one that includes concessions on proposals to expand the refundable earned income tax credit for workers without children.

Trump signed in July, Grassley said he had developed a working relationship with his Democratic counterpart, Sen. Ron Wyden, D-Ore., the panel's ranking member, and would try to overcome partisan division on big-ticket tax issues to move his tax priorities. He first took the gavel for six months in 2001, until Republicans lost control of the Senate when former Sen. Jim Jeffords of Vermont left the GOP and joined the Democratic caucus as an independent.

"This partisanship has poisoned a lot of things," Grassley said. "It was almost a foregone conclusion until maybe five years ago in this committee that everything was going to be bipartisan. It's just too partisan. So, it's tougher to get agreements."

Update: This story has been updated with comment from a spokesman for Grassley's office.