Tax Court May Reschedule Trials To Limit Spread Of COVID-19

In an attempt to limit possible coronavirus exposure, the U.S. Tax Court will reschedule trials, hearings or appearances as necessary for those who have flu-like symptoms or a fever or are coughing or sneezing, according to a statement on its website. 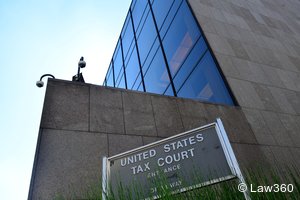 The U.S. Tax Court said it will limit the number of people who can be in a courtroom.

​​​​​​That's just one step the court said it is taking regarding the coronavirus, which is also known as COVID-19. The court also said in its announcement that it is encouraging "social distancing" and will, therefore, limit the number of people who can be in a courtroom until further notice.

Additionally, anyone who traveled from an area with widespread COVID-19 cases or where there is ongoing community spread of the virus and has symptoms, fever or shortness of breath should contact their health care provider for details on how to proceed, the court's announcement said.

Frank Agostino, founder and president of Agostino & Associates PC in Hackensack, New Jersey, told Law360 he attended the Tax Court's calendar call in New York City on Monday. More taxpayers asked for, and got, continuances, he said, with reasons that included taxpayers not feeling well and concerns that the declaration of a state of emergency in New York would interfere with the ability of taxpayers to return later for a trial.

The number of taxpayers, tax professionals and volunteers in courtrooms were minimized as well, and several law schools that would have sent volunteers to observe didn't, he said. What's more, no one shook hands, Agostino said.

"Elbow bumps were the preferred method of greeting," he said.

The Tax Court's announcement comes as the spread of the coronavirus continues, causing responses by government agencies, among many others. Tony Reardon, national president of the National Treasury Employees Union said in a statement on Monday that the Internal Revenue Service will shut down nonessential travel for 30 days unless it is "mission-critical."

Citing travel restrictions placed on many conference speakers and attendees by their employers, the American Bar Association's Section of Taxation said on its website that it, along with the International Bar Association Taxes Committee and the USA Branch of the International Fiscal Association have canceled the U.S. and Europe Tax Practice Trends Conference scheduled for April 1-3 in Munich, Germany. The three groups co-sponsoring the event changed their cancellation rules for the event and won't impose penalties, according to the ABA Tax Section's website.

The coronavirus has also caused the Paris-based Organization for Economic Cooperation and Development to call off a March 17 public consultation and most other in-person meetings, according to its website. The organization will continue meetings with working groups involved in its plan to reach an agreement on digital tax issues while still allowing parties to teleconference.