Exclusive discussion on emerging issues impacting taxation law at the 2021 IBA Global Influencer Forum with Law360 Tax Authority and leaders in the international tax industry.
Join us on July 1, 2021 and register for your spot now!
This article has been saved to your Favorites!

New Jersey residents and corporations would be granted extra time to file their state tax income returns if a federal extension is offered in response to the novel coronavirus pandemic under legislation passed Thursday by the state Legislature. 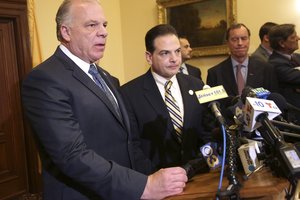 Senate President Steve Sweeney said the package is in response to the effects of the virus. (AP)

S.B. 2300 would provide New Jersey taxpayers with an extension to file annual and quarterly state gross income tax returns and corporation business tax returns due on or before April 15 if the Internal Revenue Service extends its deadline for federal returns. The Senate passed the bill with a 34-0 vote, along with other measures tagged as emergency legislation designed to assist the state in addressing COVID-19.

The Senate bill was offered to alleviate burdens for New Jersey taxpayers affected by the outbreak who may have difficulties filing timely tax returns or settling payments, according to a copy of the bill obtained by Law360.

The measure now heads to the desk of Democratic Gov. Phil Murphy. The Senate bill is an identical substitute for A.B. 3841, which passed the General Assembly without opposition on Monday.

The IRS announced on Wednesday that it will delay the tax payment deadline for most individuals and businesses to July 15 but leave in place the April 15 filing deadline. New Jersey's bill would match the federal extension date for state income tax returns, up to June 30. The federal government is also weighing an extension for the tax return filing deadline.

Senate President Steve Sweeney, D-West Deptford, underlined the importance of the package to respond to the public health and economic effects of the virus in a statement released on Thursday.

"The immediate threat is to the health and safety of residents in communities throughout the state, but it also threatens to have an impact on everything from education, medical care, public services, jobs, the economy and the finances of individuals and families," Sweeney said.

"Our society is facing an unprecedented challenge from COVID-19 that requires a coordinated response by all levels and branches of government," Kean said. "Republicans and Democrats in both houses of the New Jersey Legislature are working together to advance legislation that is critical to the well-being of the Garden State."

A source from the Senate majority leader's office, who spoke on condition of anonymity, said that the measure offered immediate relief for individuals and corporations but that there was still room for the state Division of Taxation to take administrative action to further extend deadlines and offer waivers for individuals, corporations and other tax filers.

At an unrelated news conference on Thursday afternoon, Murphy announced that 742 New Jersey residents had tested positive for the virus, a jump from the 427 cases that the state reported on Wednesday. Nine state residents have died from COVID-19, Murphy also reported.

Murphy's spokesman Darryl Isherwood told Law360 on Monday that the governor would be open-minded in determining how the state can assist taxpayers who are detrimentally affected by the virus.

The state's public health response to the spread of coronavirus intensified Thursday as Murphy signed an executive order to close all personal care businesses, including salons and barber shops, that cannot maintain social distancing requirements. The state would also postpone certain local elections and limit voting to mail-in ballots for elections from May 12 onward, Murphy announced.