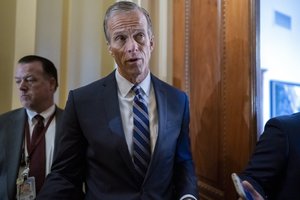 Sen. John Thune, R-S.D., and other senators introduced a bill to extend the filing deadline for 2019 taxes to July 15, the date Treasury Secretary Steven Munchin has announced as the deadline for tax payment. (AP)

The lawmakers made their case two days after Mnuchin announced that the Internal Revenue Service would extend its payment deadline to July 15 in order to ease the burden on filers and stimulate the economy, but that it would maintain April 15 as the filing deadline.

“Treasury’s decision to extend the tax payment deadline from April 15 to July 15 was an important first step, but it only makes sense to also extend the tax filing deadline itself,” Thune said. “There’s enough confusion amid this outbreak as it is, so I believe it’s incumbent upon Congress to provide as much clarity and relief as possible to American families.”

Neal's letter asked Mnuchin not only to extend the filing deadline until July 15 but also to delay the deadline for payments on estimated taxes for the first quarter, which is set for June 15.

The American Institute of Certified Public Accountants, which represents more than 431,000 members, supported the legislation introduced by Thune.

“The AICPA is grateful to Sen. Thune for his leadership on this critical issue, and we support his efforts to provide Americans with much-needed tax filing relief in the midst of this national emergency," Edward Karl, AICPA vice president of taxation, said in a statement. “Now is the time to support individuals and businesses.”

In light of the outbreak of the novel coronavirus, which causes COVID-19, CPAs are ill prepared to fulfill their responsibilities in a timely manner unless the IRS delays the filing deadline, Chris Hesse, chair of the AICPA’s Tax Executive Committee, told Law360.

Working from home with families present, as many tax preparers are currently forced to do, “is not the best working environment for focusing on preparing tax returns,” he said.

The IRS said in a Wednesday notice that individuals and pass-through businesses owing up to $1 million in federal income taxes and corporations owing up to $10 million in taxes could defer payments for 90 days without interest and penalties.

Mnuchin said in a statement Wednesday that the deferral would ensure “that hardworking Americans and businesses have additional liquidity for the next several months” and that the delay would free up some $300 billion.

“Offering taxpayers only relief for federal income tax payments but not for the filing of any tax or information returns is not sufficient, nor does it recognize the burdens our citizens are facing across the country,” he said. “More must be done immediately.”

The IRS does not comment on pending legislation, a spokesperson for the agency, Dean Patterson, told Law360.

Update: This article has been updated with a response from the IRS.