Legislation introduced Thursday by Senate Majority Leader Mitch McConnell, R-Ky., would provide cash payments to families and grant tax relief to individuals and businesses in Congress' third effort to stave off the economic effects of the novel coronavirus pandemic. 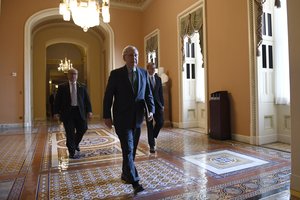 Senate Majority Leader Mitch McConnell introduced legislation Thursday to provide cash payments to individuals and tax relief for people and businesses in the wake of the coronavirus pandemic. (AP)

The Coronavirus Aid, Relief and Economic Security Act would authorize the Internal Revenue Service to send checks up to $1,200 to individuals, increased by $500 for every child, subject to income limitations. The bill would also make a slew of tax changes, including delaying the April 15 tax filing deadline to July 15, pushing back estimated tax payments for corporations and deferring employers' portions of Social Security taxes.

“We need to help protect American workers, families and small businesses from this unique economic crisis that threatens to worsen with every single day,” McConnell said on the Senate floor as the legislation was introduced. “We need to have the American people’s backs.”

In addition to delaying the tax filing deadline until July 15, the legislation would allow individuals to postpone paying their estimated tax obligations until Oct. 15 in an effort to stimulate the economy.

. It targets the so-called retail glitch by allowing companies to immediately write off expenses related to physical improvements instead of depreciating them over the course of 39 years. It also would restore the limits on "downward attribution" of the stock ownership of foreign corporations, undoing a change under the TCJA that subjected some foreign entities to additional tax and reporting requirements.

The legislation would also allow employers and self-employed workers to pay their 6.2% payroll tax obligations over the next two years. Employers that choose to defer payment must provide half of the total amount by Dec. 31, 2021 and the other half by Dec. 31, 2022.

The bill also provides that businesses can carry back losses from 2018, 2019 and 2020, for up to five years as in the past. Also, net operating losses would temporarily not be subject to a taxable income limitation, meaning they could fully offset income.

Businesses would also be able to increase the amount of interest expense they can deduct for the 2019 and 2020 tax years by raising the 30% limitation on adjusted taxable income to 50%, per Internal Revenue Code Section163(j)

To prop up ailing airlines, who had lobbied the government for relief, the bill would exempt them from paying some aviation excise taxes for 2020.

The senators’ effort to extend the tax-filing deadline mirrors legislation introduced earlier Thursday by other Republican lawmakers and a letter sent by House Ways and Means Committee Chairman Richard Neal, D-Mass., to Steven Mnuchin, secretary of the U.S. Department of the Treasury.

The legislation would also waive the 10% early-withdrawal penalty from qualifying retirement savings accounts for disbursements worth up to $100,000, if individuals are responding to “coronavirus-related purposes.”

McConnell said that he and his colleagues are standing by and waiting to begin negotiations with their Democratic counterparts to pass the legislation, and said Mnuchin would participate in discussions over the bill.

“We’re ready to act as soon as an agreement with our colleagues from across the aisle can be reached,” he said.

“The pandemic is spreading, economic collapse is looming and Republicans seem to be prioritizing the corporate tax wish list over the economic well-being of people who are losing their livelihoods at this very moment,” he said in a statement. “While broad economic stimulus is needed, the first priority must be those who have no way to pay their bills for potentially months down the road.”

Update: This story has been updated to provide more detail on the bill along with lawmakers' reactions to it.