Justices Plow Ahead With Work Amid Coronavirus Pandemic

Washington - The novel coronavirus may have closed the U.S. Supreme Court doors, but it hasn't stopped its work. The justices held their regular weekly conference Friday — some dialing in via phone — and are expected to hand down orders and opinions Monday morning. 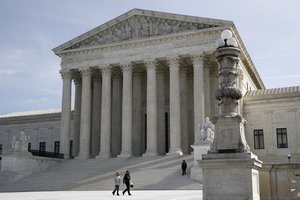 The U.S. Supreme Court has continued its work selecting cases to hear, and the justices are expected to hand down one or more opinions Monday morning. (AP)

The COVID-19 pandemic has upended the Supreme Court term, with the oral argument session originally planned for Monday being postponed indefinitely. The court, however, is chugging along with its other work of deciding which petitions to take up or reject and handing down rulings in argued cases.

According to a court spokeswoman, all of the justices are "healthy" and participated in Friday's conference, with "a number" of them participating by phone.

"Like all of us, the justices are following public health guidance," said Kathy Arberg, the court's public information officer, in an update to reporters. "The justices are temporarily foregoing their traditional handshake."

At 9:30 a.m. Monday, the court will release a list of orders issued in cases discussed at Friday's conference. Among them is the federal government's challenge to a California law barring local officers from sharing certain information about foreign citizens with U.S. Immigration and Customs Enforcement.

At 10 a.m., the court is expected to hand down one or more opinions that have been argued so far this term. The justices will not take the bench for the opinion announcement, as they typically do.

The spread of novel coronavirus has cast uncertainty over the 2019-2020 term, which under normal circumstances would now be kicking into high gear with the approach of its summer recess. Instead, the court has postponed the two-week oral argument session that was supposed to begin Monday. It is the first time since the Spanish flu outbreak of 1918 that the court has called off arguments due to public health concerns.

Among the arguments that the court will now look to reschedule are those in a trio of cases dealing with subpoenas for President Donald Trump's tax and financial records.

In an effort to accommodate those affected by the virus, the Supreme Court has also relaxed deadlines for petitions for certiorari, or review. The court said it would allow 150 days, up from the usual 90, to file petitions appealing lower court judgments, orders denying discretionary review or orders denying timely petitions for rehearing. The extensions do not apply to cases in which the justices have already granted review.

It's unclear when or how the court will reschedule the oral arguments, but many court watchers want the justices to use the experience as an opportunity to adopt modern tools like livestreaming audio that it has resisted for years.

"They obviously should figure out how to do live audio," Gabe Roth, executive director of judicial watchdog group Fix the Court, told Law360 on Thursday.

"My guess is if they do have an argument on April 20, there will not be a public gallery," he said. "The bottom line is, should the court reconvene on April 20, the court should put in some policies where what goes on in the courtroom can be heard in real time anywhere in the country."