As Congress mulls $500 billion in relief for certain industries devastated by the coronavirus outbreak, Sen. Chris Van Hollen, D-Md., is pushing to require that corporations accepting the assistance disclose information about their global taxes, his office said Monday. 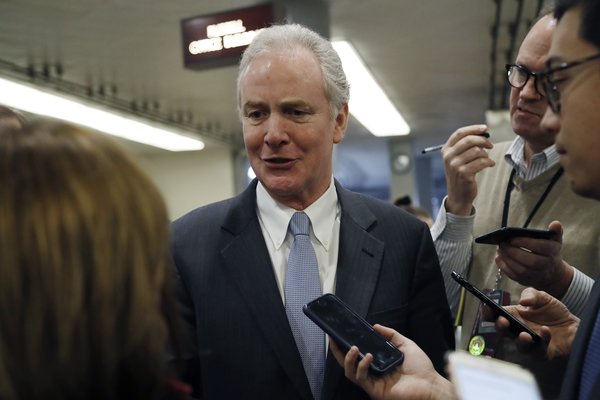 The senator's push comes as nonprofit organizations such as Oxfam America and the Financial Accountability and Corporate Transparency Coalition also call for public country-by-country tax reporting in the bailout package, which they say would expose and clamp down on international tax avoidance. The Internal Revenue Service already requires companies to report the information privately as part of Organization for Economic Cooperation and Development standards released in 2015.

The $500 billion Exchange Stabilization Fund, meant to aid industries such as airlines, which face catastrophic losses from the coronavirus outbreak, has become the sticking point in contentious negotiations between Democrats and Republicans over a massive, nearly $2 trillion spending bill to rescue the economy.

Democrats claim legislation proposed by Senate Majority Leader Mitch McConnell, R-Ky., gives the U.S. Treasury Department too much leeway to choose which companies get relief and with too few strings. The Senate blocked the bill in a vote Monday after Democrats opposed it.

Many Democrats have called for conditions on the companies receiving assistance, including things like a $15 minimum wage and labor representation on their boards of directors. President Donald Trump even signaled that he was agreeable to a restriction on stock buybacks.

Questions about international avoidance in the middle of the legislative wrangling are growing, as many people question whether taxpayers will bail out companies that skirt their own tax responsibilities. Democrats have also criticized Trump for proposing relief to cruise line companies, most of which receive a federal tax exemption and are incorporated offshore. Trump has also floated the possibility of supporting General Electric Co., which in the past has faced sharp criticism for its offshore tax practices and low effective tax rate.

By requiring companies to report to tax authorities a global blueprint of their operations, those administrations would be able to better deploy resources and target problematic transactions. For instance, if a company reported high profits, but a small workforce or few facilities in a country, that would seem to indicate that it had shifted income into that jurisdiction for tax reasons — especially if its tax payments were low there, too.

Nongovernmental organizations were early supporters of country-by-country reporting but expressed dismay that the OECD neglected to recommend that countries enact public disclosure rules. The European Union has considered enacting public requirements anyway, but the countries are deadlocked on the issue.

Now that the pandemic has forced the government to step into the economy in an unprecedented way, those groups see another opportunity to push the issue. The FACT Coalition wrote a letter to lawmakers, and Oxfam released a public statement urging Congress to consider public country-by-country reporting requirements on March 20.

Aside from the reporting issue, the FACT Coalition and the U.S. Chamber of Commerce are also locking horns over other international issues being considered as part of the relief package.

In a March 16 letter, the Chamber asked Congress and the White House to consider whether to relax the base erosion and anti-abuse tax and the tax on global intangible low-taxed income, two provisions from the Tax Cuts and Jobs Act

The FACT Coalition strongly opposed the idea in its own letter, claiming that weakening those TCJA rules would “further damage small business competitiveness, starve public resources [and] cause individual taxpayers to shoulder more of the cost of the COVID-19 response.”

While the proposed legislation does not include language affecting those two items, it would temporarily loosen the limits on the deductibility of interest included in Internal Revenue Code Section 163(j)

, enacted by the TCJA. That section is based on OECD guidelines to prevent earnings stripping through artificial loan arrangements, but supporters of the relief change say it would help companies absorb sudden losses over the next two years.