As strict public health measures enter into force to counter the growing threat from the COVID-19 pandemic, most European countries have announced equally strong fiscal measures to counter the economic shock from the crisis, recent data from the OECD shows. 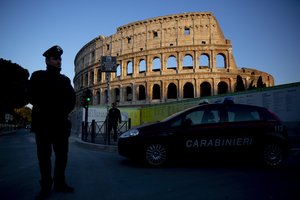 Italy, which has overtaken China as the epicenter of the pandemic, is enforcing a strict lockdown of businesses and homes, and the economic impact seems certain to be enormous. (AP)

A spreadsheet released Monday by the Organization for Economic Cooperation and Development listed tax relief measures being offered by countries around the world, with the responses from Italy, Spain, France, Germany and the U.K. among the most extensive.

The five largest economies in the European Union single market have been the worst affected by coronavirus in terms of the number of infections. The bloc has itself announced a number of emergency measures including the suspension of the strict fiscal deficit rules for member countries and the temporary relaxation of competition rules allowing targeted tax breaks and cash grants.

Italy is now at the global epicenter of the crisis, having overtaken China, where the virus originated, in terms of deaths last week, according to the World Health Organization. It is enforcing a strict lockdown of businesses and homes, and the economic impact is set to be enormous in the EU’s third-largest economy.

Measures being taken to ameliorate the financial situation for Italian taxpayers include the suspension of tax payments for all taxpayers resident in the 11 worst-affected municipalities that are subject to a complete ban on movement. The suspension applies from Feb. 21 until April 30.

Workers and employers in all of Italy have been exempted from paying social security taxes until April 30. All tax payments for companies in the most affected sectors across the country — tourism, transportation, catering, entertainment, sports and education — are suspended for March. Companies in all sectors with revenue under €2 million are also exempt.

Spain has the second-highest death rate from the disease in Europe and the third in the world after China, according to WHO statistics. Its economic response has included a raft of tax measures.

The payment of corporate income tax has been deferred until May 30 for companies with gross annual revenue of less than €6 million ($6.5 million), up to the value of €300,000. Value-added tax can also be deferred until the same date with the same rules. The maximum amount of all taxes that can deferred is €30,000.

For workers, personal income tax has been suspended for those with an income below €6 million, with the maximum possible deferral being €30,000.

France responded to the crisis by ordering nonessential businesses to close and people to remain in their homes. The measures have been extended to limit people’s movement to within one kilometer (0.62 mile) of their homes, and are likely to last into April.

Tax policy measures that have been announced include the ability for the self-employed to defer withholding taxes on their professional income from one month to another up to three times, or from one quarter to the next, depending on their usual frequency of payments.

Employers in the EU’s second-largest economy can suspend the payment of social security taxes for three months.

Germany is the bloc’s largest economy by a significant margin, and it has the largest population. The country has reported a relatively low mortality rate from COVID-19, but it is also experiencing the economic disruption that has accompanied the disease. This is likely to worsen, as it announced its own lockdown Tuesday.

Germany relies heavily on exports and is sensitive to falling demand in the rest of the world. It has deferred personal and corporate income tax for businesses affected by the virus, and it has deferred the payment of VAT.

Default payments for unpaid taxes have been waived, and social security payments have been repaid to those on reduced hours due to the crisis. Further measures are set to be announced this week.

The United Kingdom is no longer a member of the EU, but remains in the single market until at least the end of the year. Prime Minister Boris Johnson has been strongly criticized for the perceived slow response to the pandemic, with a lockdown announced only Monday evening.

The fiscal response to the crisis, by contrast, was quite strong. All businesses in the U.K. are eligible for a tax deferral for the period between March 20 and June 30. Sectors particularly affected by the crisis can benefit from a 100% discount in their business rates, which is a form of property tax.

A deferral of value-added tax will be possible between March 20 and June 30, for which all VAT-registered businesses are eligible.

This will generally mean the deferral of one quarter’s VAT: the payment due on April 7, May 7 or June 7, 2020, or the monthly payments due on each of these dates.