At a time when fallout from the COVID-19 pandemic is wreaking havoc on state budgets nationwide, Florida's approach to tax policy, relying overwhelmingly on the traditional sales tax, has put it in a uniquely precarious position. 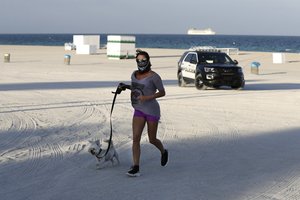 A jogger and her dog were turned away from a closed beach by a police officer Wednesday in Miami Beach's South Beach area. Florida, which relies heavily on sales tax revenues from its tourist attractions, has been placed in a precarious position by the COVID-19 pandemic. (AP)

The Sunshine State, which relies heavily on its sunny beaches and famous theme parks to bring in the revenue necessary to keep the whole state afloat, has seen those attractions — and the many hotels, restaurants and gift shops associated with them — slam shut.

That would create a difficult situation for any state, but Florida raises 79% of its revenue through sales taxes on in-state purchases. Florida has no personal income tax. It is one of only two states with a sales and use tax that has failed to conform to the landmark decision in South Dakota v. Wayfair, which allows states to compel online retailers to collect and remit sales and use taxes.

As a result, the state will likely be forced to draw on its budget reserve, which is substantial at nearly $4 billion, noted Scott Peterson of the sales tax compliance firm Avalara. But prospects for replenishing it seem bleak now, he said.

"Usually when states have a bad year, it's a bad year for one tax, not a bad year for the only tax," said Peterson, a former executive director of the Streamlined Sales Tax Governing Board. "Florida's budget is going to get really bad, really fast. They put all their eggs in one basket."

In addition, the state has taken significant steps to whittle down its corporate income tax. Republican Gov. Ron DeSantis has also committed to following through on the distribution of $543 million in corporate tax refunds the state promised two years ago, according to a spokesman for his office.

Meanwhile, on Wednesday a state appeals court handed down a ruling that could be ominous for Florida counties, holding that Airbnb and other short-term rental platforms don't need to collect Palm Beach County's local tourist development taxes.

"We're in a mess," Karen Woodall, executive director of the Florida Center for Fiscal and Economic Policy, told Law360. "We're going to be on hard times. Our economy is based on tourism — when we need revenue the most, our revenue goes down."

The Florida Legislature, which adjourned March 19, took some steps to conserve tax revenue. It reduced a planned tax cut package of about $120 million down to about $48 million, and it cut about half of a planned $200 million tax credit package. But it did not establish any new revenue, including by conforming to the U.S. Supreme Court's Wayfair decision.

A bill that had been moving through the Legislature, S.B. 126, would have established a Wayfair provision in Florida. Filed in August 2019 by Sen. Joe Gruters, R-Sarasota, the bill passed the Commerce and Tourism Committee on Oct. 15 by a vote of 5-0. It then passed the Finance and Tax Committee on Feb. 13, 8-0. A month later, though, on March 14, the bill died in the Appropriations Committee without a vote. It was withdrawn and indefinitely postponed. A Wayfair provision would have raised an estimated $700 million a year for Florida.

Gruters did not immediately respond to several attempts by Law360 to contact him.

A Wayfair provision would have removed the different standards for brick-and-mortar Florida retailers, whose sales tax collections carry much of the economy, and online retailers, who still don't have to collect and remit tax, said H. French Brown of Dean Mead Egerton Bloodworth Capouano & Bozarth PA.

Brown, who has written on the topic for Law360, said in an interview that this is even more relevant in light of the novel coronavirus. With so much reliance on the traditional sales tax, and no Wayfair provision, Florida will likely have to withstand a double hit, he said.

"In these times, as states are shutting down in-state businesses to prevent the spread, and many people are doing their shopping remote and online, Florida is going to get a double impact because they haven't adopted Wayfair," Brown said.

He added that every state with a sales and use tax will likely see that revenue drop, but those with Wayfair provisions may at least be able to recoup some revenue from online retailers. Florida won't.

Brown said it will be some weeks before the full extent of the revenue problem is realized in Florida because the sales tax tends to be a lagging indicator.

"It's probably going to be May before Florida gets a real good grasp on what happened in March and April," Brown said. "Wayfair could have helped potentially reduce any decline if we would have done something — or if we do something in the near future."

Florida has taken other steps in recent years that will affect adversely affect revenue during the coronavirus pandemic. First, it has minimized the incidence of its corporate income tax to about 1% of corporations. Second, in November 2018, voters approved a ballot measure that requires a two-thirds majority in each chamber before the Legislature may approve new taxes or fees, or increase existing ones.

"All of that combined really puts Florida in a precarious position," said Sadaf Knight, CEO of the Florida Policy Institute.

A spokesman for DeSantis did not immediately respond to Law360's questions as to whether the governor supports any revenue-raising measures, including a Wayfair measure such as S.B. 126.

Andrew Appleby, tax professor at the Stetson University College of Law, analyzes Florida tax policy with a particular emphasis on how measures such as the 2018 ballot vote and the failure to adopt Wayfair constrain the state from raising revenue. His research has focused on how revenue-raising constraints affect efforts to mitigate climate change in a state that is surrounded by water on three sides, Appleby said, but the research can also be applied to how the state will be able to withstand the COVID-19 pandemic.

"We have a lot of constraints and there are to be costs in the future that are going to be fairly significant," Appleby said. "We already have the supermajority [ballot measure] and no personal income tax. On top of that, we're going to have a lot of tax bases eroded very significantly and very quickly."

Appleby said many states would try to cope with that by ramping up enforcement efforts, as he said he observed during the Great Recession of 2008. But again, he said, not having Wayfair or a marketplace facilitator law is going to leave Florida a lot less to enforce.

"Florida is really at a severe disadvantage," Appleby said.

That may be why, even with nearly $4 billion in reserve, Florida was ranked 41st out of 50 states by Moody's Analytics in October 2019 in being prepared to withstand a moderate recession. The Center on Budget and Policy Priorities also gave Florida a low mark in research it published on the subject March 20, noted Dylan Grundman, a senior policy analyst with the Institute on Taxation and Economic Policy.

Asked what Florida is facing, Grundman said: "It's really kind of a perfect storm."