A package of corporate tax relief measures in the $2 trillion coronavirus relief bill generated little controversy or attention as the legislation worked its way through Congress, but tax experts are expressing growing concerns that its cost could explode. 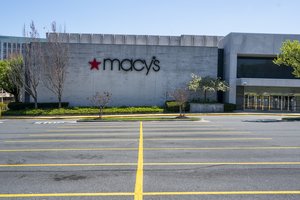 The Macy's store at the popular Tysons Corner Center sits closed Monday in Virginia. Macy's announced it would furlough most of its 130,000 workers after its stores closed due to the virus outbreak. (AP)

Supporters say the language, giving taxpayers more flexibility to carry losses to past or future years and to loosen restrictions on interest deductions, will help companies absorb massive hits to their earnings this year, and better prepare them to recover when the pandemic is over. The Joint Committee on Taxation, as well as independent analysts, pegged the cost of these measures at around $200 billion over 10 years — a paltry amount compared with the legislation's overall $2 trillion cost.

But critics claim the cost estimates are little more than guesses given the unpredictable economy this year. And should the provisions be extended, it could permanently weaken one of the key measures in the 2017 Tax Cuts and Jobs Act

to prevent profit-shifting out of the U.S.

Lawmakers said they wanted companies big and small to have immediate access to cash, to weather the deep recession that began when health and government officials advised citizens to stay indoors and avoid local businesses in response to the outbreak of the virus, which causes COVID-19.

Much of that relief will come through a U.S. Treasury Department $500 billion lending fund for distressed companies, which was a major sticking point between the two parties. Democrats claimed it amounted to a "slush fund" for President Donald Trump's administration and refused to approve the legislation until further oversight was agreed to.

Less discussed were the corporate tax provisions in the legislation, applying to all taxpayers. The bill temporarily lifts restrictions on net operating losses that were enacted by the TCJA. The relief bill, named the Coronavirus Aid, Relief and Economic Security Act, or CARES Act, restores companies' ability to take a single year's losses and apply them to earlier years. It also removes an 80% restriction on how much losses companies can carry forward.

Loss carrybacks allow companies to receive refunds on their taxes, including those for years when the corporate tax rate was 35% instead of today's 21% rate. That will allow them to immediately report a decrease in taxation to their shareholders and receive a significant refund from the Internal Revenue Service soon — likely faster than they could access liquidity through the new federal lending programs. Aside from 2020 losses, the bill allows companies to carry 2019 and 2018 losses back five years.

, a business interest deductibility limit that was significantly tightened by the TCJA. The rule, based on recommendations from the Organization for Economic Cooperation and Development, is meant to restrict companies' ability to strip earnings through intercompany debt by restricting deductible interest to 30% of earnings before interest, taxes, depreciation and amortization, or EBITDA.

Manipulation of interest has become one of the most high-profile forms of tax abuse, and was linked to a rush of corporate inversions in the U.S. last decade.

The CARES Act loosens that limit to 50% for 2020. It also allows companies to use their 2019 EBITDA to calculate the limit, rather than the current year's — which could be close to zero given the tanked economy. Companies that are desperately borrowing money to get through the year will not only be able to receive interest deductions, but thanks to the restored carryback rule can apply those to past, more profitable years.

Nearly everyone agrees that companies need assistance when business is nearly frozen. But some question whether this program, while fast, is the best way to use taxpayer dollars to prop up the economy.

"This is a very large amount of money to have had almost no conversation about," said Marc Goldwein, senior vice president and policy director for the Committee for a Responsible Federal Budget, a Washington, D.C.-based nonprofit that advocates for deficit reduction. "Even if there's some logic to this, that doesn't mean it's the best way to use precious dollars, or that it doesn't deserve scrutiny."

In part, the anxiety comes from questions about the reliability of the price tag. Thomas Barthold, the chief of staff to the JCT, said the committee did its best to predict how the economic downturn would affect corporate profits and losses.

"We adjusted the baseline to the best of our ability to reflect what looked like current trends and projections that outside forecasters were making," Barthold said. "We admit that there is great uncertainty to these estimates."

Steve Rosenthal, a senior fellow at the Tax Policy Center, a D.C.-based research group affiliated with the Brookings Institution and the Urban Institute, said the true cost of the assistance could be double, or more.

"The NOL carryback would never have been enacted if it had scored as bigger than the $500 billion 'slush fund,'" said Rosenthal, who is also a former legislative counsel to JCT. "But that might be the magnitude of it."

Both measures have also been criticized by more left-leaning analysts, who claim it will also help profitable companies.

"The loosening of 163(j) will benefit companies that are still profitable in 2020 — that is, not affected much by the crisis. The changes to NOL will be a bonanza for rich real estate investors," Gabriel Zucman, an economics professor at the University of California, Berkeley, who advised many Democratic presidential candidates on taxes, told Law360 in an email.

Experts doubt that companies will take advantage of the one-year loosening of 163(j) to move taxable income out of the U.S. In addition to that code section, regulations under IRC Section 385

also restrict companies' ability to engage in borrowing between subsidiaries. Treasury had proposed paring back much of that rule, but with coronavirus likely swamping its workload many doubt it will finalize that proposal this year.

The 385 rules could stop companies from shifting their 2020 profits — for the few that have any.

But given Congress' tendency to delay painful future tax hikes, fiscal hawks wonder if 163(j) will ever go back to the 30% limit. If the pandemic stretches on and Congress pushes the new rule into 2021, it will brush up against another scheduled tightening. To raise revenue and pay for the cut in the corporate rate, the TCJA revised the calculation of the 163(j) formula in 2022 to be even less generous to taxpayers. If those two policies bump up against each other, it could create what legislative analysts call a cliff, forcing Congress to either extend the relief again or let businesses experience a drastic tax increase.

"Given the upcoming interest cliff in 2022, I expect Congress to revisit the interest deduction caps in general," said Nicole Kaeding, an economist with the National Taxpayers Union Foundation, a research institution affiliated with the conservative anti-tax group. "In 2022, the cap will tighten significantly; that will put pressure on Congress to revisit all of its changes over the last few years."

Or Congress could revisit all this before 2022. Many lawmakers have promised to pass further coronavirus relief later this year. Loren Ponds, a former tax counsel for the House Committee on Ways and Means and a current member of Miller & Chevalier Chtd., speculated that Congress could repeal the TCJA's scheduled future tax increases and expirations as part of a future relief bill.

Negating those "could alleviate the economic impact of essentially shutting down the country," Ponds said during a Miller & Chevalier webcast on Friday.

If Congress continually extends 163(j)'s 50% limit, it could become one of the many so-called tax extenders that become, in practice, permanent tax policy.

"This is a high risk to become permanent," Goldwein said.

JCT estimated at the time of its passage that TCJA's 163(j) changes would raise $250 billion over 10 years. The CARES Act reduces that figure by $13.4 billion.

Congress is likely to give analysts and tax practitioners time to breathe before passing another set of tax changes. After the Senate passed the bill Wednesday, Senate Majority Leader Mitch McConnell, R-Ky., announced that the body would be in recess until April 20.