House Democrats will face challenges from skeptical GOP lawmakers as they look to move a new relief package with a potential second round of cash payments to be funneled through the Internal Revenue Service to help families weather economic tremors from the new coronavirus. 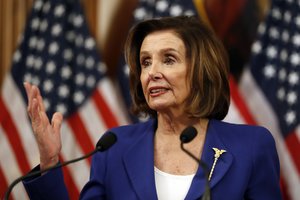 House Speaker Nancy Pelosi has said a new bill will be needed to counter the economic fallout from the new coronavirus. If such a bill is passed, it would be the fourth relief measure from Congress to address the pandemic. (AP)

Speaker Nancy Pelosi, D-Calif., and her team signaled plans for a new bill to counter economic fallout from the virus after watching Senate Republicans take the lead on the $2 trillion rescue law signed by President Donald Trump Friday. Senior House Democrats are focused on reasserting their chamber's constitutional role as the originator of tax legislation and laying groundwork for a potential face-off with the GOP on another relief package by late April.

"We have to pass another bill that goes to meeting the need more substantially than we have," Pelosi said on CNN Sunday.

Such a measure could be a vehicle for additional cash payments and could provide an opening for other items similar to those contained in the new law, including tax incentives for families and businesses and tweaks to the Tax Cuts and Jobs Act

The House Republican Conference chair, Rep. Liz Cheney, R-Wyo., told Law360 it was too early to tell whether Republicans would be willing to support a second wave of payments and other items.

"We'll see what happens. We're facing an unprecedented public health and economic crisis and challenge. We're going to do everything we need to do to ensure our families all across the country will have all the support that they need," Cheney said.

Cheney and other senior Republicans in both chambers have called for taking a more deliberate approach to developing the next virus relief package to allow time to assess the just-passed law's effects.

Rep. Jodey Arrington, R-Texas, a Ways and Means member, said he remained skeptical of the direct payments in the new law and pushed back against a new round of payments.

"We need to watch and see what's working. I wasn't supportive of the way direct payments were worked into this piece. And I would not be going forward," Arrington told Law360, referring to payments in the new law and in a potential follow-up.

Despite such GOP concerns, the Democratic Congressional Campaign Committee chair, Rep. Cheri Bustos, D-Ill., said Pelosi and her team would gather feedback on additional cash payments and other ideas from members of their caucus and had not made a final decision on specific components of the new bill. While the Senate is set to return to Washington on April 20, Pelosi and her team are deliberating over when to summon House members back to Washington to begin work on the new relief measure.

Ross Baker, a political scientist at Rutgers University, said the fate of the proposed fourth relief measure to address the new coronavirus pandemic would hinge on whether it has a broad economic impact in areas outside current hot spots such as New York, San Francisco, New Orleans and Seattle, and whether lawmakers see the virus as a "universal threat."

"As long as the curve of contagion grows, it's the strongest argument for additional measures," Baker told Law360.

Baker said Democrats were emboldened by an expansion of jobless aid in the new law and were determined to "strike while the iron is hot" to move another bill that makes headway on partisan fiscal priorities.

The IRS has been working with Treasury's Bureau of the Fiscal Service to send out the first cash payments in April, and some Democrats have been pushing to provide more than the $500.7 million in the new law to the IRS through fiscal 2021 to deal with increased responsibilities for sending out cash payments.

"We need another round. I'm pleased with what we've achieved, but it's not enough," Waters said.

Kildee told Law360 that many people see the need for both long- and short-term stimulus to help the country weather the coronavirus crisis, and pointed out that a draft plan developed by Treasury before Senate Republicans unveiled their relief bill envisioned two rounds of payments, one in April and one in May.

Schakowsky predicted Pelosi and her team would be ready within several weeks to move the new bill.

"Hopefully, there will be another round of payments. A one-timer is not going to do anything," she said.

For her part, Pelosi has signaled plans to use the next package as a vehicle for several ambitious proposals outlined in the alternative bill her caucus offered in response to the Senate GOP blueprint for the newly enacted virus rescue law. For example, she has promoted an expansion of paid leave benefits and a contentious $48.5 billion House-passed plan known as the Butch Lewis Act, H.R. 397, to provide loans to troubled multiemployer pension funds.

But both proposals face likely opposition in the Senate. Some GOP senators and business advocates have voiced concerns that potential new mandates for paid leave and other employee benefits would put a burden on small businesses and could lead to payroll tax hikes down the road. Senate Finance Chairman Chuck Grassley, R-Iowa, has poured cold water on the House-passed multiemployer pension bill and argued for an alternative Senate GOP blueprint calling for the payment of higher flat-rate premiums per plan participant to the Pension Benefit Guaranty Corp. and a co-payment by retirees.

If Pelosi pushes hard for ambitious Democratic fiscal priorities, it is unclear whether the two parties can cut another deal similar to the trio of already enacted relief bills, according to Douglas Holtz-Eakin, president of the American Action Forum and a former director of the Congressional Budget Office. Before the rescue law, both sides reached agreement on the Families First Coronavirus Response Act

and an $8.3 billion supplemental spending law

to help federal and state agencies combat the virus.

Holtz-Eakin said the new rescue law drew key support from a bipartisan coalition of lawmakers supporting four main priorities: aid for small businesses and large corporations, expanded jobless aid and cash payments. He said the next package likely would require a similar coalition and a multifaceted approach to deliver aid both to families and to businesses.

"If it's an opportunistic effort by Democrats to do what they have long wanted to do, it will be a disaster and gridlock. If it's focused on checks and things that deal with the crisis, it will go better," Holtz-Eakin said.