Congressional Republicans on Tuesday blasted House Speaker Nancy Pelosi's call for a fourth coronavirus bill to roll back, at least in part, the $10,000 state and local tax deduction cap enacted in the 2017 federal tax overhaul. 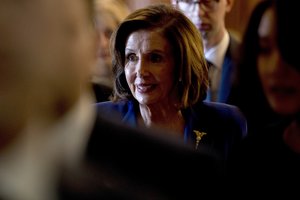 House Speaker Nancy Pelosi's call to roll back the federal cap on the state and local tax deduction has been criticized by Republicans as an unnecessary move favoring the rich. (AP)

Half the benefits from repealing the Tax Cuts and Jobs Act

's $10,000 cap on state and local tax deductions would go to households in the top 1%, said Rep. Kevin Brady, R-Texas, the House Ways and Means Committee's ranking member. His comments came after Pelosi, on Monday, told The New York Times that Congress could "retroactively undo SALT" for 2018 and 2019 so that taxpayers can refile.

"Prior to tax reform, the wealthy could deduct taxes, subject to limitations, they paid to state and local governments from what they owed to the federal government," Brady said. "Republican reforms capped those deductions to ensure everyone paid their fair share."

The Joint Committee on Taxation estimated in June that repealing the $10,000 cap in 2019 would lower federal revenue by about $77 billion and decrease the tax liability for 13.1 million taxpayers, with 94% of those benefiting having $100,000 or more in income.

New Jersey Democrats voiced support for the proposal by Pelosi, D-Calif. Rep. Bill Pascrell, D-N.J., posted online that he is pushing hard to include state and local tax relief in the next emergency stimulus package.

Pascrell, who sits on the House Ways and Means Committee, voted in December with House Democrats to advance to the Senate the Restoring Tax Fairness for States and Localities Act, or H.R. 5377, to the Senate.

That bill would double the $10,000 cap on income, property and sales tax deductions to $20,000 for married couples in 2019 and eliminate the cap entirely for 2020 through 2022. The bill would restore the top 39.6% individual tax rate, raising almost $191 billion between 2020 and 2027, according to a revenue estimate from the Joint Committee on Taxation. In total, the legislation would raise about $6.2 billion, according to the JCT.

But if a repeal is passed in the House, it will likely be rejected by Senate Republicans, who hold a majority.

The proposal comes as a number of states, including Louisiana, Rhode Island, Connecticut, New Jersey, Oklahoma and Wisconsin, have created pass-through taxes as a workaround to the SALT cap.

Pelosi's office did not immediately respond to a request for a comment Tuesday.

Representatives of Brady and Grassley did not respond to requests for comment.