A key meeting to iron out an agreement on corporate tax reform planned for July has been pushed to October due to COVID-19, the Organization for Economic Cooperation and Development's top tax official, who is holding the talks, said Monday. 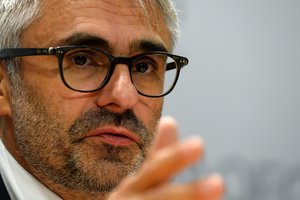 The announcement by the OECD's Pascal Saint-Amans that a July meeting in Berlin would be postponed contrasts with the organization's recent statements that it would stick to its timeline for a revision of global tax rules. (Getty Images)

Pascal Saint-Amans, speaking via webcast, also said it was possible the final agreement on revised global tax rules, planned for completion this year, will be concluded in stages, with some of the final details not worked out until next year.

"I don't exclude that we would have a staged process" in which some parts of the potential agreement would shift to 2021, said Saint-Amans, director of the OECD Center for Tax Policy and Administration. "We're in the midst of a negotiation. It's too early to say what's going to happen."

The OECD is shepherding a two-pronged reform of international corporate taxation. The effort involves finding a consensus among nearly 140 countries and territories on both a redistribution of some taxing rights to jurisdictions with large numbers of digital users and a global minimum tax. Following a mandate from the Group of 20 countries, the OECD is aiming to announce a deal on these plans by the end of the year.

Saint-Amans' announcement that the OECD will postpone one of the project's key interim deadlines contrasts with statements made over the last two months that the organization would stick to its timeline despite the COVID-19 crisis. Under the prior schedule, the group had hoped to announce an interim decision on an agreement at the meeting scheduled in Berlin this July.

"Given the situation, it is clear that the Berlin meeting will not take place," Saint-Amans said, adding that there still would likely be a virtual meeting of the group "to take stock of where we are."

Under the current plan, a physical or virtual meeting is scheduled for October, and it is expected that the group will ultimately adopt a package. Still, he suggested a number of questions had yet to be resolved.

"What will be delivered in October? We don't know yet," the official said. "What we can see are tensions, conflicts of views."

At the same time, Saint-Amans said the need to find a deal remained urgent, as evidenced by the "blossoming" of some taxes from individual countries hoping to claim companies' digital revenue. He also said a common approach would likely avoid trade disputes.

The United States and France remain in conflict over a French digital tax that the country introduced last year. The U.S. threatened to charge tariffs on French products and backed down early this year only when France decided to suspend collection of the tax until the end of the year, when it was hoped that an international deal would be in the works.

The U.S. has also stated that it wants to make whatever agreement is reached on a redistribution of taxing rights to be optional, an idea that many other participants in the negotiation have found to be a nonstarter.