Illinois should seek federal aid for infrastructure projects to make up for a potential $690 million decline in gas and gambling tax revenue as a result of the novel coronavirus pandemic, an Illinois think tank said Wednesday. 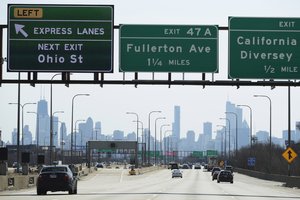 Illinois could lose up to $559 million in gas taxes with vehicle travel down about 40% due to the pandemic and approximately $130 million in gambling tax revenue while casinos are shuttered during the state's stay-at-home order, according to a report from the Illinois Economic Policy Institute. But an influx of federal relief dedicated to infrastructure would allow the state to retain jobs and keep vital transportation projects from being delayed or canceled, the report said.

"As a means to offset lost revenue due to reduced travel and closures from stay-at-home orders, the federal government may want to consider an emergency relief and economic recovery package," the report said.

Rebuild Illinois, an infrastructure plan enacted in June, doubled the state's per-gallon gas tax rate to 38 cents from 19 cents — the first increase since 1990 — and allowed an expansion of state gambling operations.

Those revenue streams were primed to provide key funding to the plan, which was projected to generate $45 billion in capital improvements over six years. The report said that while the pandemic has eroded those estimates, federal infrastructure aid would help fill the gap, and studies have shown that the aid would yield a high return on investment through job creation and retention.

The federal government has already sent aid to states that was mostly targeted toward small businesses and individuals under the Coronavirus Aid, Relief and Economic Security Act

. But another round of relief that includes infrastructure funding would help states dig out from the economic downturn caused by the virus, Frank Manzo IV, the institute's policy director and co-author of the report, told Law360.

"In a recession, the two best ways to grow the economy and promote economic growth are investing in education and investing in infrastructure," Manzo said. "And so, certainly infrastructure should be a strong component of any aid to states."

The report did not include a specific amount of relief that Illinois should request from the federal government. Mary Tyler, who also co-authored the report, told Law360 that infrastructure funding would only be one element of a relief package that Congress could provide to the state.

Tyler, who is also the institute's transportation analyst, said the report only analyzed how much travel, and therefore gas tax revenue, would decline through the end of the year. That means the state could face a sustained reduction in gas tax revenue that the report didn't take into account, she said.

"The bottom line here is that no one knows what travel is going to do over the coming months," Tyler said. "There's a chance that this is going to go well into 2021, and so that would be an even larger impact" on the gas tax revenue.

The offices of Senate Majority Leader Mitch McConnell, R-Ky., and House Speaker Nancy Pelosi, D-Calif., did not respond to requests for comment. McConnell has said he would support states filing for bankruptcy protection instead of borrowing money from the federal government to fund budget shortfalls attributable to the virus.

Carl Davis, research director at the left-leaning Institute on Taxation and Economic Policy, told Law360 that the report's gas tax projections were "alarming" and "well within the realm of possibility."

Davis said that while states traditionally pay for capital projects with gas taxes, Illinois would not be able to make up for its lost infrastructure revenue simply through an increase.

"This is a problem you're not going to be able to solve with a gas tax increase," Davis said. "The magnitude of an increase that would be needed is just too large."

Davis said he believes that federal aid should be an option for states to pursue to address any budget gaps resulting from the pandemic.

Davis and the report's authors also said that Illinois residents could help address the state's budget woes by passing a constitutional amendment in the fall that would impose a graduated income tax.

Democratic Gov. J.B. Pritzker's office has estimated that Illinois will face a $6.2 billion budget gap in fiscal year 2021 if the ballot question passes, and a $7.4 billion gap if the question fails, according to a budget forecast that takes the virus into account.

Manzo told Law360 that expanding the state's sales tax base or imposing a tax on retirement income on high-earners may also be tax policy options that state lawmakers could explore to make up for its budget deficit.

Pritzker spokeswoman Jordan Abudayyeh did not respond to a request for comment.