The economic collapse brought on by the novel coronavirus will lead to a $41.2 billion drop in tax revenue for California, the finance department of the nation's most populous state said Thursday. 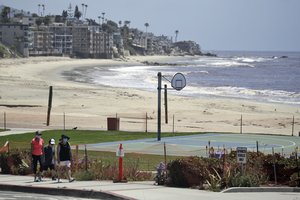 In a briefing, the California Department of Finance predicted a calamitous outcome for the state with a projected $54.3 billion budget deficit through fiscal 2021, which begins July 1, and ends June 30, 2021. California started the calendar year with a record $21 billion in reserve.

The initial budget forecast for 2020-21 outlined in January by Democratic Gov. Gavin Newsom reflected a $5.6 billion surplus. At that time, Newsom was proposing a $222 billion budget that included many of his priorities, such as additional funding for programs for the homeless.

"The widespread economic interruption caused by the global pandemic is unprecedented in modern history," the department said. Still, the state's yearslong effort to build up its reserves would now serve it well, according to the department.

"While the COVID-19 recession is causing an unprecedented loss of jobs and income, the projected deficit as a percent of general fund spending is modestly smaller than the budget deficits faced by the state in 2003 and 2009," the department said.

Also on Thursday, Newsom gave a briefing outlining California's progress in battling the virus, saying that the state has done well enough that as of Friday, it will begin to cautiously open what he termed as "low-risk" businesses, such as clothing stores. But Newsom began that briefing with a discussion of the fiscal collapse brought on by the coronavirus, and said that his state, or any other, would not be able to go it alone no matter how much belt-tightening they do.

"It's absolutely incumbent on our federal partners to recognize the magnitude of this moment," Newsom said in a plea for a federal aid package to shore up state and local governments.

The governor is scheduled to give his annual May budget update on May 14.