Colorado's residential property taxes may fall steeply in the aftermath of COVID-19 as the pandemic brings down oil and gas and commercial property values, potentially boosting efforts to reform a constitutional provision that would trigger a residential assessment rate reduction. 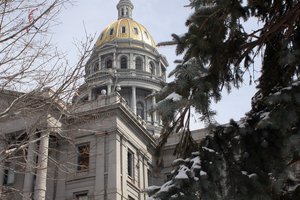 As Colorado property values plummet during the COVID-19 pandemic, state legislators may move to alter an amendment that limits the property tax rate. (AP)

As the global pandemic caused by the novel coronavirus continues to upend the world's economy, Colorado's localities in particular may have to grapple with freefalling property tax revenues. This is due to the pandemic's interaction with the state's Gallagher amendment, a key constitutional provision that requires residential property tax to make up no more than 46% of the state's property tax base.

The value of oil and gas and commercial properties will likely drop, according to the Department of Local Affairs' Property Tax Division's presentation to the state joint budget office this week. In contrast, residential property value may still rise, despite the pandemic, for the state's next assessment cycle. The rise and fall in values for the different types of property could result in the residential assessment rate, the percentage of a residential property's actual value that is taxed, being cut from 7.15% to 5.88%.

This 17.8% reduction in the rate would be the second-largest drop in history since voters adopted the Gallagher amendment in 1982. The pandemic's ability to trigger assessment rate cuts that will be permanent, unless the people vote otherwise, has added support to calls to reform or repeal the Gallagher amendment to protect the fiscal health of the state and its localities.

"This moment, with the COVID crisis and the way that it's affecting property valuations, really makes it imperative that we make some changes to Gallagher," said Sen. Chris Hansen, D-Denver, who is pushing for a resolution to repeal the amendment.

The rate drop carries potentially disastrous consequences for school districts and counties, which rely heavily on property taxes for funding, the division said. Because the state backfills student funding if districts fall short, the drop could also put pressure on Colorado finances as the state is facing a fiscal crisis of its own.

Commercial property in Colorado is usually valued with a mix of the sales comparison approach and the income approach, according to JoAnn Groff, the state property tax administrator who presented to the budget office, and the pandemic has greatly reduced the income that commercial properties can generate.

"Residential actual values have grown dramatically — and I would use the word dramatically — in the state of Colorado. All other values haven't grown quite as much," Groff said, referring to the change in property values since the enactment of the Gallagher amendment. "That's what keeps forcing that residential assessment rate down for residences."

The pandemic has also aggravated the steep drop in values for oil and gas properties, which already suffer from a supply glut, by reducing demand as countries across the world initiate lockdowns. This is because Colorado ties oil and gas property value to both production and price of oil and gas.

"Oil and gas is just in the toilet," Groff said.

The actual revenue drop for the 2021-2022 cycle could be even worse, as the estimate is based on the 2019 value and not the larger estimated 2021 value, Groff told Law360. The drop would affect certain districts more than others; for areas like the state's Front Range that have had residential property values appreciate significantly, school districts may not experience as serious a revenue drop, but districts where residential properties have not appreciated as much would be hit hard.

Although property taxes are collected locally, state finances could be implicated as well at a time when the state's tax revenues may fall $5.5 billion by fiscal year 2022, according to a report by the governor's budget office. Under the state's school financing laws, the state backfills student spending if school districts do not raise enough funding through property tax. Applying the estimated rates to the 2019 values would result in the state having to backfill $246 million, according to the division.

Additionally, reductions in the residential assessment rate may raise property taxes on businesses, which would further hurt companies already struggling from the economic slowdown brought on by the pandemic and potentially hinder post-pandemic recovery. Some localities have so-called floating mill levies that rise whenever the residential assessment rate drops, allowing localities to maintain tax revenue while putting a tax increase on commercial properties, which mostly have a fixed rate of 29%.

"We've never had an economic shock that would just dramatically lower the valuation of nonresidential commercial property," Sen. Jack Tate, R-Centennial, told Law360. "We'll see a crippling tax increase on nonresidential property as a result of what's going on."

Complicating matters further is the Colorado Taxpayer's Bill of Rights, or TABOR, which requires that any tax increase be approved by popular vote. This means that if the estimated residential assessment rate goes into effect, any effort to raise it above 5.88% would have to go to a vote of the people, making it difficult for districts to raise property tax revenue.

Seven times before, studies conducted by the state property tax administrator have shown that the residential assessment rate should have been raised above the rate used in the preceding two-year cycle. In each instance, the state General Assembly reenacted the preceding effective rate rather than refer the issue to the people.

But the pandemic's unprecedented impact on property values has provided an extra impetus for legislators who want to repeal the Gallagher amendment. Hansen and Tate are part of a bipartisan effort promoting a November ballot question that would cleanly repeal the amendment. The resolution is likely to be introduced after the Assembly returns May 26, Hansen said.

However, even if the amendment were repealed, the continued existence of TABOR means raising residential tax rates in any form would still be difficult. The continued need for voter approval of tax raises paired with the fact that no approval is needed to drop rates has kept a repeal of the Gallagher amendment from gaining much support from the state's county commissioners, according to Gini Pingenot, legislative director for Colorado Counties Inc., a statewide association of county commissioners.

"They have, in air quotes, 'flexibility' to go in only one direction, and that is down," Pingenot told Law360, referring to the Assembly.

County commissioners would be uncomfortable having the legislature make decisions about counties' primary revenue stream, as it would be under pressure to drop assessment rates without considering county budgets, Pingenot said.

One possible option to mitigate the effect of the pandemic on the reassessment might be to push back the cutoff for data used to calculate residential and commercial property values. Currently, the reassessment will use data from Jan. 1 to June 30, but extending that to Sept. 30 could allow the state to have a better understanding of the real estate market for both residential and commercial property, Pingenot told Law360.

The state could also change the two-year cycle to a four-year one or delay the reassessment until after the effects of the pandemic pass, both of which would require legislative action, as the two-year cycle is dictated by statute. While those options may stabilize values, a potential side effect would be freezing commercial property values that are artificially high, providing no relief to those owners.

Additionally, while a clean repeal of the amendment would require only a simple majority of the popular vote, modifications would require a 55% majority, which Tate said would be a "pretty big extra hurdle."

The enshrinement of the amendment in the constitution means any proposal to change it will be a difficult political lift, but Hansen said there was broad bipartisan support for a resolution to bring the issue to the voters and a wide base of community groups to get behind a potential ballot measure.

"It's not going to be easy, but I think we've got a winning coalition that is ready to coalesce around this effort," Hansen said.