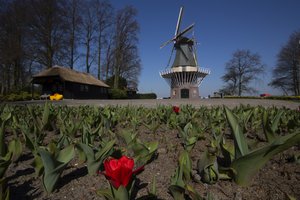 The Keukenhof garden in Lisse, the Netherlands, stood empty in March as Europe's tourism industry declined amid pandemic measures. The European Commission cited the Netherlands and five other nations as having tax features commonly used to lower tax bills. (AP)

Cyprus, Hungary, Ireland, Luxembourg, Malta and the Netherlands are all named as countries among the 27 in the EU that have features of their tax systems commonly used to lower tax bills artificially. The reports offer recommendations on how the jurisdictions can improve their legal systems, something the commission said is paramount if Europe is to deal effectively with the economic consequences of COVID-19, the respiratory disease caused by the new coronavirus.

The Netherlands' legal and tax system makes it an attractive destination for illicit fiscal flows, and it is frequently used by entities engaged in money laundering and aggressive tax avoidance, the commission said. The absence of withholding taxes to countries outside the European Union means that the country is often used to export capital to no-tax jurisdictions, its report added.

A large proportion of foreign direct investment is often held by opaque special-purpose entities that are frequently mired in accusations of tax fraud and money laundering, according to the report. A number of Dutch institutions have been involved in high-profile money-laundering scandals, and the commission pointed to a misalignment between the high risk of tax fraud and money laundering for these transactions and low reporting standards. This highlights the need to more effectively investigate and prosecute such behavior, its report on the Netherlands said.

The Dutch tax regime also drew criticism for lacking a well-functioning beneficial ownership register, in light of what the commission called the extensive presence of complex legal structures within the Netherlands.

The country needs to take steps to reform its tax system and to ensure effective enforcement of anti-money-laundering norms, the commission said. The report said a reform of withholding taxes on royalty and interest payments that takes effect in January 2021 was "a positive step" toward decreasing aggressive tax planning, though its effectiveness "should be monitored closely."

Ireland frequently is accused of being a tax haven within the European Union, and several high-profile cases currently before the European Court of Justice allege that the country has granted illegal state aid to large multinationals such as Apple through tax breaks.

The commission's report on that country said that aggressive tax planning by multinationals has "spillover effects" and that EU countries including Ireland need to coordinate with one another to counter the negative impact of that behavior.

The high level of dividend and royalty payments as a percentage of gross domestic product suggests that the country is being used by companies that engage in aggressive tax planning, and the effectiveness of the rules to prevent this remains to be seen, the commission said.

The commission recommended that apart from stepping up actions to counter aggressive tax behavior, the country take steps to broaden its tax base. Just 10 companies account for 45% of corporate taxes paid in Ireland, which creates a potentially volatile and unpredictable tax take given international capital's transitory nature, the report said.

Luxembourg is another country that the commission and tax justice campaigners have criticized as having lax application of international standards.

The commission said Luxembourg also poses a significant money-laundering risk, and features of its tax system are commonly associated with aggressive avoidance. Luxembourg's exemption from withholding taxes on outgoing payments makes it attractive for companies wishing to structure their affairs to pay a zero rate of tax, the report said.

While noting that Luxembourg was taking steps to remedy the issues with its tax system, the commission asked it to do more and address weaknesses in its anti-money-laundering legal framework.

The report on Cyprus called on that country to rout out aggressive tax planning, saying the economic evidence suggested its tax rules were used for that purpose. The commission noted that two programs in which citizenship or visas are granted in exchange for investment have been listed by the Organization for Economic Cooperation and Development as having a high risk of abuse.

Malta has taken steps to reform its corporate tax system by enacting European and international initiatives to counter aggressive tax schemes, but the country's treatment of nondomiciled companies and individuals — who are considered residents of Malta for tax purposes but have no presence in the jurisdiction — pose a significant risk of tax avoidance.

The commission asked that Malta complete its reforms to address current governance shortcomings and step up action to counter aggressive tax planning.

In Hungary, measures have been taken in the past to address the potential abuse of the country's complex tax system, but the absence of any withholding tax on capital transferred to tax havens leaves it open to abuse.

The country has volatile and relatively high capital inflows and outflows, the report said, which suggests it is vulnerable to aggressive tax practices. The report recommended the country take steps to strengthen its tax system against these practices.

"The coronavirus pandemic and the necessary containment measures have dealt a brutal blow to Europe's economies," Gentiloni said during an online news briefing. "Everyone must pay their share. There can be no place for aggressive tax planning in a Europe of solidarity and fairness."