A spike in unemployment claims has sparked a push on Capitol Hill to develop new training and employment tax incentives in coronavirus relief legislation as both parties face off over the pending expiration of a temporary expansion of jobless aid. 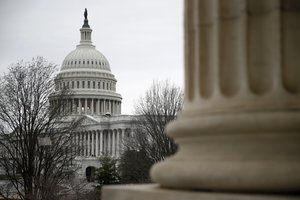 Some congressional Democrats and Republicans are taking a wait-and-see approach toward economic indicators before agreeing to more tax incentives. (AP)

Republicans and Democrats in Congress agree additional measures are needed to address the more than 40 million unemployment claims filed since March. But they disagree on the timing and scope of such measures to address the COVID-19 pandemic, and key players in both parties say negotiations may proceed slowly until just before the scheduled end of increased jobless aid on July 31.

Democrats have vowed to protect displaced workers in the House-passed $3 trillion Health and Economic Recovery Omnibus Emergency Solutions Act, or Heroes Act, which would provide a six-month continuation of the extra $600 in weekly jobless aid and more economic impact payments for all taxpayers. But Senate Republicans have blocked the bill, opposing more impact payments, and instead support a cap on jobless aid so that it does not exceed pre-layoff wages.

In light of such differences, House Ways and Means Chairman Richard Neal, D-Mass., made clear that he did not expect a quick compromise on components of a final package. But he predicted additional unemployment claims and other economic indicators would spur support both for more jobless aid and for tax incentives to help unemployed workers deal with financial setbacks and job searches.

He also has been working on an economic recovery package that could combine business incentives with a five-year replacement for the Fixing America's Surface Transportation Act,

"In my mind, I'm open to a lot of suggestions," Neal said, referring to incentives to fight unemployment.

Neal pointed to efforts by some lawmakers in both parties to develop tax incentives aimed at curbing layoffs and helping displaced workers. For example, Rep. Derek Kilmer, D-Wash., chairman of the New Democrat Coalition, has worked with allies such as Reps. Terri Sewell, D-Ala., and Susan Brooks, R-Ind., to promote his proposal, H.R. 7032, to provide a fully refundable $4,000 tax credit to cover training expenses through the end of 2021 for workers laid off during the pandemic.

"It's definitely needed," Sewell, who is vice chairman of the Ways and Means Committee, told Law360.

Brooks said the measure would help workers deal with "incredibly difficult financial burdens" and would cover "apprenticeships, stackable credentials, and college courses so they can help to restart our nation's economic engine and thrive in the post-pandemic economy."

Rep. Suzan DelBene, D-Wash., a Ways and Means member, has been pushing to include a provision in the Heroes Act to expand the employee retention tax credit for employers to cover 80% — instead of half — of a worker's salary and allow eligibility for some businesses receiving Paycheck Protection Program loans.

"Keeping employees on the payroll is a mutual goal of workers and businesses," DelBene said, referring to the credit, which is designed to cover a different share of payroll costs than a PPP loan.

While the GOP has attacked the overall Heroes Act for favoring relief measures instead of stimulus incentives for businesses, some Republicans have backed DelBene's plan. Rep. John Katko, R-N.Y., said broadening the retention credit was "critical to strengthening our economy and saving local jobs."

Other items on the table include several GOP proposals to reward an unemployed worker for taking a new job. Sen. Rob Portman, R-Ohio, has proposed continuing $450 in weekly federal unemployment aid for an as-yet unspecified number of weeks, and Rep. Kevin Brady, R-Texas, ranking member on Ways and Means, has called for $1,200 in continued jobless aid.

While Brady tries to develop a GOP recovery package focused on expanding temporary business incentives in the Tax Cuts and Jobs Act,

he said he would hold off a decision on any replacement for expanded jobless aid contained in the Coronavirus Aid, Relief and Economic Security Act

In the Senate, Finance Committee Chairman Chuck Grassley, R-Iowa, told Law360 he still hoped to develop a GOP alternative to the Heroes Act focused on business tax incentives, but said he had not yet gotten a green light from party leaders to develop proposals for jobless aid and incentives for jobless workers.

Like Neal and Brady, Grassley and other senior Republicans made clear any deal probably would hinge on an analysis of unemployment statistics and other data in June and July. Senate Majority Whip John Thune, R-S.D., said Republicans hoped a package of tax measures and other items could be put together by July and combined with a business shield against COVID-19 liability lawsuits.

"That would be ideal if we could get liability to ride on whatever the next iteration of this is," Thune told Law360.

With an eye on such a broad deal, Sen. Tim Scott, R-S.C., a Finance Committee member, said he and other Republicans remained open to incentives both for employers and workers to promote hiring and reduce unemployment. He has backed the Senate version of the proposed training tax incentive for jobless workers in S. 3779, sponsored by Sen. Amy Klobuchar, D-Minn.

"It is helpful in reducing our unemployment rate and increasing the revenues to the Treasury," Scott told Law360.

He added there could be a need for other tax incentives aimed at preparing displaced workers for new employers and potentially for becoming self-employed workers.

"I think we should be looking at the gig economy and how we get people trained for the future workforce. Really, the future is now," Scott said.

While both parties remain at odds over ambitious components of the Heroes Act — such as new tax incentives for families with children and support for workers in health care and other key fields — some lawmakers on both sides say they see a potential pathway to resolving differences over a package of measures aimed at helping businesses retain and hire workers and helping workers improve skills and find jobs.

Rep. Tom Reed, R-N.Y., a senior Ways and Means member, said whatever happens, Republicans would insist on limiting jobless aid to ensure total benefits do not exceed a worker's prior salary. But he also said they were determined to come up with a package of measures to promote employee retention, hiring and training to reduce the need for jobless aid.

"There's a lot of incentives in the code. But we can formalize that, and expand it. Definitely," Reed told Law360.