US Still Hoping For 2020 Deal On Digital Taxes

As the U.S. pushes European leaders to halt negotiations on taxation of digital companies, citing the coronavirus pandemic, it still hopes for a deal by year's end, according to a letter by Treasury Secretary Steven Mnuchin that Law360 obtained Friday. 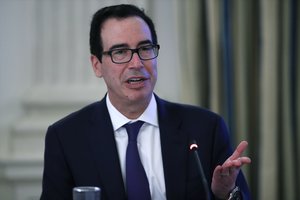 Treasury Secretary Steven Mnuchin's June 12 letter to four European officials suggested that talks on digital taxation could resume this year after a pause, but reiterated the U.S. stance that a plan to reallocate international taxing rights should be made optional. (AP)

The letter, dated June 12, was sent to the finance ministers of Spain, France, the United Kingdom and Italy. The document set off an international firestorm when it was revealed by news reports and by U.S. Trade Representative Robert Lighthizer in congressional testimony this week. But while it reiterates U.S. opposition to taxes targeting online or digital transactions — which many European leaders are still pushing for — Mnuchin's letter leaves open some rays of hope for reaching an agreement before 2021, when countries are poised to launch a trade war over the issue.

Aside from indicating that the U.S. believes negotiations could resume later this year, Mnuchin also said all sides were close to an agreement on Pillar Two, a second part of the international project, which aims to create recommendations for a global corporate minimum tax that countries could enact as a measure against tax avoidance. Pillar One would change how taxable income is allocated to market jurisdictions, where users or consumers are located.

Pillars One and Two are parts of a project that began at the Organization for Economic Cooperation and Development with a request from the Group of 20 advanced economies in 2017 to address tax challenges from the digitalization of the economy.

"The world is presently facing the most serious public health crisis in over a century and the most serious economic challenge in generations," Mnuchin wrote. "The United States does not believe 2020 is a suitable time to be conducting such negotiations."

Mnuchin went on to add, "The United States therefore calls upon the OECD to pause discussions of Pillar One, with a view towards resuming later this year, when they can more appropriately receive the attention they require."

On Thursday, French Finance Minister Bruno Le Maire called Mnuchin's letter a "provocation" to other OECD members working in "good faith" to reach an agreement. Angel Gurría, the secretary-general of the OECD, said Thursday that the working groups of the project would continue with their scheduled meetings.

The summer fireworks come as many countries, both within and outside the OECD, are enacting digital services taxes on revenue from online activities. The U.S. Trade Representative's Office announced this month that it was beginning investigations of nine countries and the European Union over digital taxes they have enacted or are considering, which could open the door for the administration to enact retaliatory tariffs.

The office has already produced a report recommending tariffs as high as 100% on French products such as wine and makeup because of that country's digital services tax, but the White House agreed to hold off on taking action until 2021 as OECD negotiations continue.

All sides seemed close to an agreement on a proposal to allow market countries more rights on taxing all corporations, whether or not they are digital. But the U.S. announced opposition to the plan in December, calling for it to be enacted as a "safe harbor" — an optional alternative to the existing tax system.

Mnuchin's June 12 letter made it clear that the U.S. had not changed its stance.

"Pillar One would change the most fundamental principles of international taxation, including the taxable nexus threshold of physical presence and the arm's-length principle," Mnuchin wrote. "We believe that such a change should be made only after a thorough evaluation and discussion."

Mnuchin said that the letter's four recipients had rejected that approach, and that the sides were "at an impasse." The U.S. cannot agree to any measure, even temporary, that would single out technology companies, many of which are based in the U.S., he said.

Tax practitioners, tech industry groups and other stakeholders spent Thursday and Friday scrambling to understand the implications of the U.S. announcement. By the end of the week, many were still unsure whether the letter is the last straw for the long-troubled project, or part of the bluster and fireworks that can occur during a negotiation.

"There is a lack of political attention in some cases," said Will Morris, deputy global tax policy leader at PwC LLP. "I think what the past week has shown is that attention is shifting back."

Morris, who also chairs Business at OECD, an industry advisory group, said the upcoming presidential election in the U.S. may also play a role in the timetable.

"The idea that any big decisions are going to be made in the lead-up to the election misunderstands the U.S. situation," he said. "I think the election needs to be gotten past in order for the U.S. to really be able to get back into this."

The coronavirus pandemic has added additional complexity and logistical challenges to the project while also heightening the demand from countries for revenue, especially from the digital sphere. But Morris said this also increases the need for a consensus solution.

"I would argue that the advent of the pandemic, the need for revenue, the need to address some of the big problems which relate to change shape of the economy, the changing business models, all of this has become more important," Morris said.

OECD officials did not immediately respond to a request for further comment.

Update: This story has been updated to include comments from Morris.