Business advocates are mounting a push on Capitol Hill to include new tax incentives to cover the costs of coronavirus testing and equipment and office upgrades in the next legislative package aimed at easing the COVID-19 pandemic's economic fallout. 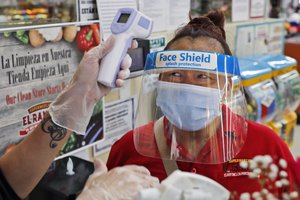 Congressional lawmakers in both parties hope to muster support for tax incentives designed to help businesses cover testing devices, masks, shields and other expenses as they reopen amid the pandemic. (AP)

in March, such as Paycheck Protection Program loans and the employee retention tax credit.

In the Senate, Grassley said he was reluctant to embrace incentives aimed at encouraging businesses to reshape their practices and facilities to help curb the spread of the virus.

"Once you go down that path, I don't know where you stop," the top Senate tax writer told Law360.

Grassley has been weighing suggestions from President Donald Trump, such as tax incentives for tourism and a payroll tax cut, and sifting through other proposals for business tax incentives for a Senate GOP pandemic response plan, including a plan to make permanent full expensing of business equipment.

Despite Grassley's cool stance, business advocates say they hope to build support for targeted incentives to help businesses deal with a variety of pandemic-related expenses. They have voiced concern about the ability of companies to cover items ranging from the purchase of protective gear and health screening tests to the development of mobile phone apps and other software to encourage more online sales rather than over-the-counter transactions.

For example, Sen. Ted Cruz, R-Texas, has been pushing the Work Safe Act, S. 3966, a proposal to provide a tax credit for biweekly health screening tests provided by employers to workers in 2020. A cap on the credit would be set at $300 per test at enactment and decline gradually to $150 three months later. The credit would cover three types of tests: those for the novel coronavirus, SARS-CoV-2; for the respiratory disease it causes, COVID-19; and for antibodies to the virus. Supporters of the proposal include Americans for Tax Reform, an anti-tax watchdog group.

"Congress should do its part to help employers cover the cost of testing to promote a safe workplace," Cruz said in a written statement.

In the House, Neal has called for Republicans to cut a deal on ambitious relief measures included in the House-passed $3 trillion Health and Economic Recovery Omnibus Emergency Solutions Act, such as expanded tax incentives for families with children and an additional round of economic impact payments. Neal has also opened the door to proposals for business tax incentives to be components of an economic recovery plan that could move this summer.

Rep. Kevin Brady, R-Texas, has been developing a GOP stimulus plan, which he has said offers a number of incentives to help businesses cover the cost of dealing with the pandemic. It includes an expansion and permanent extension of temporary expensing for business equipment to include floor-plan redesigns.

"We are proposing it be expanded to include property and structures for the COVID-19 reconfiguring," Brady, the ranking member on Neal's Ways and Means panel, told Law360.

Brady told reporters Thursday evening he also planned to push for a "healthy workplace" tax credit, which would cover measures aimed at protecting workers and customers.

As Neal and Brady develop their economic stimulus plans, Rep. Darin LaHood, R-Ill., a member of the Ways and Means Committee, has been trying to rally support for H.R. 7079, a bipartisan bill known as the Clean Start: Back to Work Tax Credit Act, which would cover the cost of cleaning workplaces to reduce the spread of the pandemic. The bill would provide a 50% tax credit capped at $25,000 per location and $250,000 per company for cleaning products, tools, machinery and other equipment needed to ensure a safe and sanitary environment and for training certification programs for custodial cleaning and management.

Meanwhile, Rep. Brenda Lawrence, D-Mich., has rallied support from 18 co-sponsors from both parties for a similar proposal, H.R. 7216, to provide a tax credit capped at $25,000 for the costs of personal protective equipment for small businesses, independent contractors, veterans' groups, farmers and nonprofits organized under Internal Revenue Code Section 501(c)(3)

As both parties prepare to negotiate the next pandemic response measure, members of both congressional tax-writing committees say they will be looking to reshape existing tax incentives or create new ones to help businesses cope with the cost of trying to protect workers and customers against the spread of the novel coronavirus.

Many Democrats were focused on strengthening and carrying out existing incentives such as Paycheck Protection Program loans and the employee retention tax credit, but probably would be open to proposals for additional measures, Sen. Ben Cardin, D-Md., said.

"The tax code needs to be sensitive to COVID-19," Cardin told Law360. "I'm sympathetic. Right now, the small-business provisions are aimed at keeping small businesses alive. But these other things could get some traction."

One way to help businesses cope with pandemic-related costs would be to include those costs among expenses eligible for the employee retention tax credit, which is now focused on salaries, benefits and other fixed costs, including rent, mortgage payments and utility bills.

While cool to the idea of new targeted incentives for pandemic-related costs, Grassley said a number of businesses had praised the retention tax credit, and he made clear he was open to ideas for expanding it. He said he wanted to study the implementation of the credit before making a decision on any proposed changes, including a pending Heroes Act provision to allow the credit to cover 80% of a worker's salary, instead of half, and to expand eligibility to include recipients of Paycheck Protection Program loans.

"It will be better determined in a month, when we know whether this economy is coming around," Grassley said.

Update: This story has been updated to include another statement from Brady.