A federal judge denied requests Monday from top Idaho officials to stay an order instructing them to either place an income tax increase question on the November ballot or allow more time for signature gathering due to the COVID-19 pandemic. 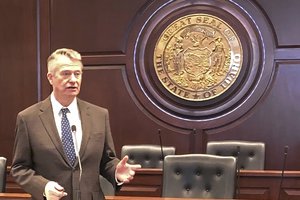 A federal court Monday denied a motion by Gov. Brad Little and other Idaho officials to stay an order instructing them to either place a question on the November ballot regarding a state income tax boost or allow more time for the initiative campaign to gather signatures. (AP)

District Court Judge B. Lynn Winmill denied a Friday motion from Republican Gov. Brad Little and Secretary of State Lawerence Denney seeking to stay his June 23 order reviving the chances that a question asking to raise individual and corporate income taxes could qualify for the Nov. 3 ballot. The court found that the state's novel coronavirus-related shutdown interfered with the campaign's First Amendment rights to obtain signatures for the initiative.

Judge Winmill had given state officials until Friday to choose whether they would certify the question, called the Invest in Idaho initiative, for the ballot or give the Reclaim Idaho campaign 48 days to collect the outstanding signatures electronically. Instead, the officials shunned the order, saying that both options would violate state law and compromise the integrity of Idaho's election.

The officials asked Judge Winmill to stay the decision while they seek an appeal of the ruling. In denying the motion, the court said there was "a narrow window of opportunity" for the campaign and the state to work out the administrative details of potentially allowing electronic signatures for the measure.

"Granting a stay of the court's decision would effectively prevent Reclaim Idaho from having its initiative placed on the 2020 general ballot, and thereby deny it the remedy required by the First Amendment," Judge Winmill said.

However, the order did not compel the officials to select either option that was presented to them.

Reclaim Idaho later filed a motion asking the court to order the state to certify the question for the ballot, saying that Little and Denney had shown "that they have no intention of cooperating with Reclaim Idaho or complying with the court's order." Additionally, an order to certify the question would provide the Ninth Circuit with "a definitive remedy" on appeal, the campaign said.

The initiative would ask voters to raise the top state income tax rate to 9.925% from 6.925% on individuals, trusts and estates with taxable income of $250,000 or more, and on married couples with taxable income at least $500,000. It would also ask voters to raise the corporate income tax rate to 8% from 6.925%. If approved, the higher tax rates are estimated to raise $170 million annually, which would be earmarked for education funding.

The campaign lodged a complaint against the officials June 8, alleging they violated its First Amendment rights by not providing a safe method to gather signatures amid the spread of COVID-19, the respiratory illness caused by the virus, before the April 30 deadline to submit petitions. Reclaim Idaho had gathered about 30,000 of the 55,057 signatures required to qualify for the Nov. 3 ballot when the pandemic hit the state in March, according to court documents.

In asking for a stay on Friday, the officials said that they had broad latitude to "temporarily curtail constitutional rights" in the midst of a public health crisis.

When Judge Winmill sided with the campaign in ruling from the bench June 23, he made it clear that he didn't fault the officials for addressing the pandemic but still held that Reclaim Idaho's rights were violated, the campaign's counsel previously told Law360.

Little and Denney also doubled down on their previous arguments that the campaign's inability to meet the signature threshold was not directly attributable to Little's March 25 stay-at-home order or their refusal to allow Reclaim Idaho to gather electronic signatures, which state election laws don't permit.

The officials argued that not allowing signatures to be gathered for the last six weeks before the April 30 deadline wasn't to blame for the question's not meeting the threshold because Reclaim Idaho had 18 months to gather the signatures.

Before Judge Winmill denied the stay on Monday, Reclaim Idaho co-founder Luke Mayville told Law360 that the campaign was in a holding pattern while awaiting more direction from the court.

"We are now in a strange situation where the court order has not been followed and the judge will decide what to do next," Mayville said.

Mayville and Reclaim Idaho's counsel did not immediately respond to requests for comment after the court denied the stay.

Little and Denney had called the court's decision "a surprising exercise of judicial activism," in a joint statement after the ruling last week, and said they would likely seek an appeal.

Representatives for Little and Denney did not immediately respond to requests for comment Monday.

Little and Denney are represented by Robert A. Berry and Megan A. Larrondo of the Idaho Office of the Attorney General.