A five-year highway reauthorization bill headed toward likely House passage this week sets the stage for an early showdown over extensions of expiring tax incentives for renewable energy as lawmakers prepare for bicameral talks on infrastructure financing and COVID-19 response legislation. 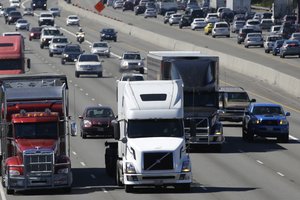 Energy provisions in the House of Representatives' highway reauthorization bill, expected to pass this week, could lead to congressional negotiations on pandemic response legislation. (AP)

House Ways and Means Chairman Richard Neal, D-Mass., and other senior Democrats say they are determined to move the Growing Renewable Energy and Efficiency Now Act, unveiled last week as part of H.R. 2, the proposed replacement for the 2015 Fixing America's Surface Transportation Act

"We're going to pass it in the House and begin a round of negotiation with the administration," Neal told Law360, referring to H.R. 2. "We think that getting a piece of legislation out will strengthen our negotiating position. We've got the tax provisions from the Green Act. That's going to be married to the infrastructure bill."

Neal said revenue-raising proposals to make up for flat gasoline tax revenue in the Highway Trust Fund, which pays for surface transportation projects nationwide, would not be part of the House highway bill but could come up later in bicameral negotiations.

The House plan would extend through 2025 deductions for energy-efficient commercial buildings, a credit for qualified fuel-cell motor vehicles and a production tax credit for biomass and qualified hydropower. It would also continue the $1-per-gallon biodiesel tax credit through 2022 before reducing it gradually to 33 cents per gallon by 2025. It would continue the qualified energy property tax credit at a 30% rate for projects that break ground by 2025 and at lower rates for projects launched in 2026 and 2027.

Among other items in the package would be an easing of limits on tax-exempt bond financing for infrastructure, including private activity bonds, and a permanent extension of the new markets tax credit.

Rep. Kevin Brady, R-Texas, the ranking member on Neal's panel, and other Republicans pushed back against the tax provisions in the highway bill and said they would insist on broader bipartisan negotiations on energy tax measures and other business tax proposals.

"At some point, I am hopeful Democrats will reach out, so that we can have a conversation on bipartisan energy tax measures," Brady told Law360. "For all industries that are struggling, we need to look for incentives that help them."

Republicans attacked the House bill for its estimated price tag of more than $1 trillion — including about $500 billion in highway funding — and complained that it was designed to provide tax incentives to renewable energy companies without taking into account the needs of other businesses, including oil and gas companies. But Democrats said it was important to address climate change concerns in the highway bill and argued that some oil and gas companies already have been helped by the Coronavirus Aid, Relief and Economic Security Act

, which allowed companies to carry back for five years net operating losses in 2018, 2019 and 2020, including potential losses from a drop in crude oil prices.

"We are being set up for temporary extensions instead of legislating," said Rep. Rodney Davis, R-Ill., a member of the House Transportation and Infrastructure Committee.

If no deal is reached on highway funding and extensions of expiring tax provisions through 2025, lawmakers in both parties said both parties might look to move shorter patches similar to a batch of extensions of temporary tax incentives enacted in an omnibus spending law

In the Senate, Finance Committee Chairman Chuck Grassley, R-Iowa, has been helping to develop a Senate GOP alternative to the Heroes Act while continuing to discuss ways to help pay for the Senate's version of the highway bill, S.B. 2302. That $287 billion measure has been stalled because of disputes in the Senate over how to make up for flat gasoline tax revenue in the Highway Trust Fund, which depends on that revenue among its sources of money.

Grassley has been exploring a proposal to replenish the trust fund with a user fee for electric vehicles. Sen. John Cornyn, R-Texas, a senior member of the Finance Committee, has promoted a mileage-based commercial freight tax.

Sen. Mike Crapo, R-Idaho, another senior member of the Finance Committee, said there was no Senate timetable for taking up the issue of expiring temporary tax incentives for renewable energy and for other businesses, but said he and other Republicans would be open to discussing them as part of negotiations on the highway bill.

"It might not be a bad idea, if we could get agreement on all of them," Crapo told Law360.

He referred to a number of temporary tax incentives expiring in 2020 not covered by the House bill, including incentives for certain racehorses, automobile racing venues, qualified mortgage insurance premiums, qualified electric utilities and certain producers of beer, wine and distilled spirits.

Several Republicans on the Finance Committee said they would insist that negotiations address the needs of all players in the energy industry.

"I absolutely want to make sure that we protect coal, oil and natural gas, because that's key to our energy economy and the overall U.S. economy," said Sen. Steve Daines, R-Mont.

to projects that start construction before 2025.

Whatever happens in the House, Sen. Shelley Moore Capito, R-W.Va., said she would help push for the extension of the credit for carbon sequestration projects in negotiations on the highway bill and extensions of tax incentives.

Other key issues in the negotiations will be the fate of a proposal to continue a tax credit for plug-in electric vehicles made by companies with cumulative sales of up to 600,000 such vehicles, tripling the current per-manufacturer credit phaseout threshold of 200,000 vehicles set in the 2009 stimulus law.

Proponents argue the continuation of the credit would provide crucial support to development of electric vehicles and to the automobile industry, but critics have questioned the need for such subsidies.

While discussing proposals for incentives for electric vehicles and renewable energy companies, senior lawmakers in both parties said they doubted there would be any changes to the gasoline tax. Congress has refused to adjust the 18.4-cents-per-gallon gas tax since 1993.

Rep. Dan Kildee, D-Mich., a chief deputy whip and member of the Ways and Means Committee, said any plans to lift the gasoline tax had lost traction in the middle of a tough presidential election year.

"It's hard because people have sort of bought a line when it comes to anything that looks like a tax increase," Kildee told Law360.

Treasury and White House officials were not immediately available to discuss the administration's tax priorities for negotiations on the highway bill and pandemic response legislation.