Countries' success with sharing bank information across borders to snuff out tax evasion should serve as inspiration for them to agree on contentious corporate tax reform, the head of the Organization for Economic Cooperation and Development said Wednesday. 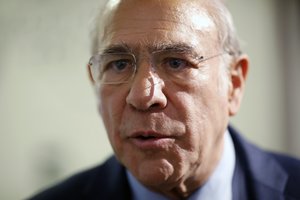 In a Wednesday address, Ángel Gurría, secretary-general of the OECD, pointed to successes with international exchanges of bank information in discussing a current effort to overhaul global corporate taxation. (AP)

In introductory remarks to a virtual gathering of officials around the world, Ángel Gurría, the OECD's secretary-general, recalled efforts that were taken to secure countries' tax bases after the 2008 financial crisis.

"Faced with a severe economic downturn, the G-20 decided to end bank secrecy once and for all and to strengthen the global fight against tax evasion," he said, according to a prepared text of his remarks, referring to the Group of 20 nations with advanced economies. "Twelve years later, we are seeing the dramatic results of this bold multilateral effort."

On Tuesday, the OECD announced that tax authorities across the globe exchanged information on 84 million offshore accounts covering €10 trillion ($11.2 trillion) in assets last year. This was nearly double the figure from one year earlier.

"With this wealth of new information, tax administrations around the world will be able to raise much needed revenue," Gurría said in the prepared remarks.

He added that this was of particular importance because of the stress that the COVID-19 pandemic had put on countries' finances.

"This shows that when we work together, we can deliver fundamental changes," he said. "This kind of international cooperation is exactly what we need to deliver the fundamental changes required to address the tax challenges arising from the digitalization of our economies."

Gurría was speaking to delegates of the inclusive framework, a group of 137 countries and territories, plus observer organizations, involved in an OECD-led effort to reach a deal by the end of the year on the reallocation of taxing rights and a global minimum tax.

He urged delegates to reach an agreement in both areas, "whether partly in October and then later in 2021, or any other possible combination driven by the political agenda." He said that further progress both among negotiators and politicians "must be achieved now to have the most comprehensive package ready as early as possible."

The United States has recently disrupted the process by asking that it be slowed to allow countries to focus on dealing with COVID-19, the respiratory illness caused by the novel coronavirus.

Speaking at an event earlier in the day organized by Politico, Gurría echoed comments made Tuesday by his top tax official, Pascal Saint-Amans, that the U.S. general election would potentially hinder the progress that could be achieved on a tax deal.

"The question is that everybody has the other eye at the U.S. election, not just for tax purposes, not just for the question of the digital taxation, but for a host of reasons," Gurría said. "I would say that this is an element which may slow down the proceedings."