Senate Republicans' forthcoming plan to address the novel coronavirus pandemic will include a payroll tax break, an additional round of direct stimulus payments and additional incentives for businesses, according to details that trickled out Tuesday. 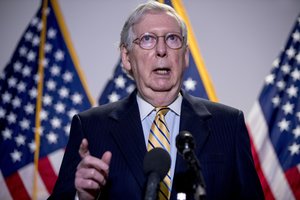 Senate Majority Leader Mitch McConnell, R-Ky., said that discussions on the scope and duration of payroll tax relief that will be included in the proposal are continuing among lawmakers and President Donald Trump's administration. The details of the plan will be shared "in the next couple of days," McConnell said after a lunch briefing with Senate Republicans and Treasury Secretary Steve Mnuchin.

A senior Republican aide confirmed that the Senate GOP plan would contain language similar to a proposal by Sen. Rob Portman, R-Ohio, for a payroll tax credit to cover employers' expenditures to protect workers from COVID-19.

Several Senate Republicans also shared details with Law360 about the plan as they left the lunch briefing Tuesday afternoon. Sen. John Kennedy, R-La., said the approximate cost of the Senate GOP stimulus package would be $1 trillion.

The package will include a four-year protection from coronavirus-related liability lawsuits for employers and an employer-based tax credit to cover business expenses that would "protect workers," Sen. Marsha Blackburn, R-Tenn., told Law360.

McConnell said that the liability protection provisions included in the Senate GOP plan would cover all kinds of employers, including schools, universities and hospitals.

Emerging from the lunch briefing, Sen. John Cornyn, R-Texas, confirmed that the plan includes a payroll tax break but didn't share details of the size of the cut or its duration. Cornyn characterized the plan detailed by McConnell as a "chairman's mark" in the negotiations among the House, Senate and White House.

"He's sort of laying this down as an initial proposal, and I think people are trying to understand it and express their interest," Cornyn said.

Cornyn told reporters Monday that the White House's insistence on a payroll tax cut could be a sticking point in negotiations.

Lawmakers last passed major coronavirus relief legislation in March, directing payments up to $1,200 to many Americans, creating a forgivable-loan program for employers to meet payroll and enacting various disaster tax relief measures. Since then, the Democratic-controlled House has passed its own version of a follow-up relief bill, which Senate Republicans have shunned.

Senate Majority Whip John Thune, R-S.D., said some Republicans were cool to the idea of a payroll tax cut and also noted Democrats' aversion to such a proposal.

"We will see what the traffic will bear," Thune said. "I know there are a lot of concerns about it on our side, and a lot of Democrats are opposed to it, too."

After hearing about components of the Senate GOP proposal, Sen. Sherrod Brown, D-Ohio, told Law360 that Republicans had failed to include several proposals that could garner bipartisan support at the expense of further tax relief for businesses.

"What they have added looks like a bunch of more subsidies for their corporate friends," Brown said.

Earlier Tuesday, McConnell said that his chamber wouldn't be considering the House-passed Democratic proposal to address the economic crisis caused by the pandemic, which is known as the Health and Economic Recovery Omnibus Emergency Solutions Act. Among other things, that bill would repeal recent limitations on net operating loss carrybacks and would temporarily eliminate the cap on state and local tax deductions.

"We won't be wasting the American people's time like the House Democrats, with their multitrillion-dollar proposal to hike taxes on small businesses, cut taxes for blue-state millionaires, and send diversity detectives into the cannabis industry," McConnell said during his opening floor remarks Tuesday.

McConnell said that the Senate Republicans' proposal would include another round of stimulus payments, dialed-up incentives for employers to rehire and retain workers and an expanded reimbursement program to help businesses improve workplace health and safety. The Senate Republican stimulus plan would also direct more funding to the Paycheck Protection Program, McConnell said.

Also on Tuesday, Mnuchin was expected to meet with House Speaker Nancy Pelosi, D-Calif., and Senate Minority Leader Chuck Schumer, D-N.Y., to negotiate on the next coronavirus relief measure.

Mnuchin said this month that he was sympathetic to the idea of expanding eligibility for economic impact payments approved under the Coronavirus Aid, Relief and Economic Security Act

Representatives of Pelosi and Schumer didn't immediately respond to requests for comment.