While former Vice President Joe Biden has sharply criticized tech companies for their tax practices, it's not a given that his administration would change the U.S. stance on either digital taxes or proposals to overhaul the global tax system. 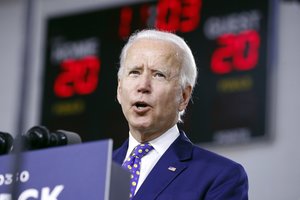 Former Vice President Joe Biden previously wrote on Twitter that "no company pulling in billions of dollars of profits should pay a lower tax rate than firefighters and teachers." (AP)

Tax officials around the world are waiting to see if the November presidential election can shake free stalled tax negotiations at the Organization for Economic Cooperation and Development. But the differences between the U.S. and other nations, especially those in Europe, have deep roots, and may require more than a change in leadership to overcome.

"I think, broadly speaking, the administration would view the interests of the country on these issues in the same way, in terms of our tax revenue and the impact on U.S. multinationals," said Brian Jenn, a former Treasury official who represented the U.S. at the OECD during both the Obama and Trump administrations.

Despite President Donald Trump's isolationist America First rhetoric, his administration was engaged in multilateral negotiations to address perceived international tax avoidance — in some ways, more than his predecessor.

Under President Barack Obama, the U.S. participated in the 2015 OECD project on base erosion and profit shifting, but pushed back on some of the more far-reaching ideas under consideration. While France and other countries pushed for a proposal that would allow countries to tax companies solely based on a digital presence, the U.S. strongly opposed this provision, as well as others that would challenge the basic principles underpinning the global tax system.

In the OECD's more recent project, prompted as dissatisfied countries went further than the BEPS recommendations to adopt national digital taxes, the U.S. relented on some of its stances.

At least, for a time.

To fend off digital services taxes, which target revenue generated from online transactions, the U.S. initially warmed to a proposal that would give countries some taxing rights on the income of multinational corporations that use their markets, regardless of whether they are physically located there. The OECD proposal included this in a package that also contained a global minimum corporate tax, partially modeled on the U.S. tax on global intangible low-taxed income created by the 2017 Tax Cuts and Jobs Act

But the U.S. dramatically and unexpectedly reversed course in late 2019, when U.S. Treasury Secretary Steven Mnuchin sent a letter to the OECD rejecting the proposal and asking that it only be considered as an optional safe harbor. The U.S. also initiated the process to enact tariffs against France and other countries that have adopted digital services taxes, only delaying those until 2021 to allow for further negotiations.

More recently the U.S. has called on the OECD to pause the whole process while governments deal with the coronavirus pandemic.

Throughout these national and international changes, the U.S. has not wavered in its stance that digital-specific taxes discriminate against American companies. And in a deeply divided Washington, opposition to digital services taxes is one of the very few things both parties agree on. Both Senate Finance Chairman Chuck Grassley and ranking member Ron Wyden have sent many joint news releases supporting the administration's actions at the OECD.

"Broadly speaking, I think Democrats are likely to be as sympathetic to business concerns about aspects of the OECD workplan as this administration has been, if not more," said Jenn, who is now a partner at McDermott Will & Emery LLP.

Biden has often criticized tech companies for, he claims, shirking their tax obligations. Amazon.com Inc., which reported no tax liabilities for 2018, is one of his most frequent targets.

But his campaign platform, so far, does not include measures singling out digital companies. He has vowed to create a new corporate minimum tax based on financial accounting information, and would tweak the GILTI tax to be less lenient to taxpayers. But he has not proposed the more fundamental reconfigurations of the international tax system that some of his rivals for the Democratic nomination offered.

"If there is a Biden administration, they will have to undertake a lot of repair work on a wide range of issues to try and rebuild relationships and trust and generate international consensus around specific policy outcomes," said Mark Mazur, a former assistant secretary for tax policy at Treasury in the Obama administration. "It will not be easy."

Mazur is now director of the Urban-Brookings Tax Policy Center, a think tank based in Washington, D.C.

Reuven Avi-Yonah, a professor of tax at the University of Michigan Law School, said that a Biden administration likely wouldn't have demanded a halt in the process, as Mnuchin did earlier this year.

"I would think they would be more similar to the Obama administration," he said. "Work with the OECD, but try to protect U.S. interests."

Fresh faces at Treasury could change the OECD dynamics as much as politics, Jenn said.

"Personnel does matter in these negotiations, and relationships do matter," he said. "Even though there are larger political currents that are affecting the negotiations."

The Biden campaign did not return a request for comment.

As the OECD continues to fine-tune the technical details of the plans and delay the biggest political decisions, Pascal Saint-Amans, the OECD's director of tax administration, has expressed hope that the process could continue after the November election, regardless of who wins.

While the OECD faces a Jan. 1, 2021, deadline, set by the Group of 20 consortium of advanced economies, it remains unclear whether it can meet that goal. The organization plans to present the latest draft of the proposals before the G-20 finance minister's virtual meeting in October.