President Donald Trump vowed to lure manufacturing back from China by using tax incentives and tariffs during a rally in Minnesota on Monday. 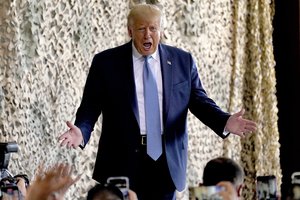 President Donald Trump speaks to a crowd of supporters on Tuesday at the Yuma International Airport in Arizona. (AP)

Trump did not elaborate on details but said the policy would continue his administration's "America First" focus on safeguarding the country's economy from foreign competition.

"We will create tax credits for companies that bring jobs from China back to America, and we'll impose tariffs on companies that leave America to produce jobs overseas," he said, speaking from the tarmac outside Air Force One in Mankato, Minnesota.

included incentives to spur domestic manufacturing, and the administration has taken a tough posture in trade negotiations with China, enacting many tariffs against Chinese products. But none has specifically focused on U.S. companies that have considered or carried out relocation to China.

Trump also said he would prepare the U.S. for future pandemics by moving medical supply chains away from China.

"We will end our reliance on China," Trump said. "We will make our critical drugs and supplies right here in the United States."

Trump's presumptive opponent in the November presidential election, former Vice President Joe Biden, has also vowed to discourage the migration of jobs from the U.S. — although not in language as stark.

His campaign has blamed the TCJA for encouraging investment overseas, an apparent reference to claims that the tax on global intangible low-taxed income creates an incentive for companies to accumulate depreciable tangible property outside the U.S. Because the TCJA defined intangible income as any income above a 10% return on a company's foreign depreciable tangible property, the more valuable that property is, the smaller the ultimate GILTI tax bill will be.

Biden has also linked the issue not only to economic growth but also to the country's ability to sustain itself during medical emergencies.

The Trump and Biden campaigns did not respond to requests for further comment.