A plan to use tax incentives to lure medical and pharmaceutical manufacturers back to the United States may not be feasible — and moreover, it could leave countries more vulnerable to the next pandemic, health and trade experts warn. 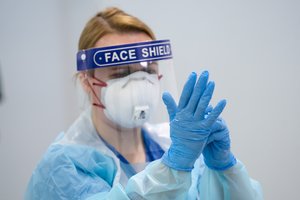 Political figures from both major parties have vowed to make the United States less dependent on other countries for personal protective equipment as well as drugs and vaccines. (AP)

As lawmakers from both sides of the aisle vow to make America self-sufficient when it comes to drugs, vaccines or personal protective equipment, many see the approach as wrong-headed. For the U.S. to rely on any one country — even itself — for crucial supplies creates a vulnerability in the next global catastrophe.

Instead, experts contend, the goal should be to create as diverse and reliable a supply chain as possible.

"It's important to create resilience as a goal here," said Thomas Bollyky, a senior fellow for global health, economics and development at the Council on Foreign Relations, a nonpartisan research group. "Resilience is ultimately about having a multiplicity of sources for essential medicines."

"We'll make the medical supplies and protective equipment our country needs. And we'll make them here in America," Biden said as he accepted the nomination during the Democratic National Convention in Milwaukee. "So we will never again be at the mercy of China and other foreign countries in order to protect our own people."

The Biden campaign's website makes it clear that tax policy would be one way that Biden, as president, would try to bring medical production back onshore. His campaign said it would offer tax credits for domestic production and would reverse provisions of the 2017 Tax Cuts and Jobs Act

In highly partisan Washington, this may be one of the few issues that Democrats and Republicans could find common ground on.

President Donald Trump has offered similar rhetoric, promising not only tax breaks for companies that move back to the U.S. but also tariffs or other penalties for those that push jobs to China.

The Republicans' pandemic stimulus legislation released in July included a bill from Sen. Lindsey Graham, R-S.C., that would offer tax incentives for companies to retrofit domestic factories to produce personal protective equipment. The bill would allow those companies to repatriate intellectual property related to those products without a tax charge.

"We've become captive to China," Graham said in a statement when he introduced the PPE bill. "This legislation will bring back the medical supply chain into the United States."

Particularly in the case of pharmaceuticals, however, experts say a fully domestic supply chain is unrealistic, and likely undesirable as well.

Edward Alden, also a senior fellow at the Council on Foreign Relations, said: "By and large, the conclusion of a lot of research is that it's extremely difficult for countries to build up full national capacity in those areas. The medical supply chain is already fully global."

Even if it were possible, it wouldn't necessarily make the U.S. more protected in a pandemic. As the novel coronavirus forced many U.S. factories and farmers to idle, domestic supply shortages proved to be as much of a threat as global disruption.

"The problems have been much more home-grown; they have not been the problems of import dependence," Alden said. "Most of the foreign export restrictions turned out to be fairly temporary."

With the World Trade Organization locked at a standstill and the U.S. escalating trade tensions with both China and Europe, further protectionism could close off potential foreign sources of supplies, moving away from the goal of a diverse global chain.

Given the unpredictability of pandemics, better management of medical stockpiles could be a more nimble and realistic preparation — although that would not be a panacea, either.

"Certainly we need much better stockpile management than what we've had," said Bollyky, with the Council on Foreign Relations. "That's not going to obviate the need to address challenges of the overall supply chain."

In the past decade, China has emerged as a key producer of active pharmaceutical ingredients, or API, the basic building blocks of drugs, raising fears of vulnerability to a country with opaque regulations and leadership. According to the Food and Drug Administration, 13% of the API-producing facilities used to make U.S. pharmaceuticals were in China in 2019, nearly double from a decade earlier.

Incentives for domestic manufacturing, Bollyky said, could be one facet of a strategy to ease off Chinese dependence and ensure more diversity in a supply chain.

"Being reliant on a single country is a risk," he said. "Having a component of that be done through luring some of the production onshore is sensible."

But given the decades that China and other key sources of pharmaceutical ingredients have spent building up facilities and a workforce to produce those products quickly, the cost of leveling the playing field through tax benefits alone could be significant.

"This is going to take time and money to do," Bollyky said. "It has to be seen as an investment in pandemic preparedness, because it will be costly both in time and resources to make this happen."

Others wonder if the taxes would be the right tool at all to influence medical supply chains.

"In general, narrowly targeted tax policies are a poor use of the tax code, and incentives like these can be better provided through direct spending programs or through the regulatory process," said Mark Mazur, the director of the Urban-Brookings Tax Policy Center and a former assistant secretary for tax policy at the U.S. Treasury Department. "The tax code is a blunt instrument for achieving fairly narrow policy goals."