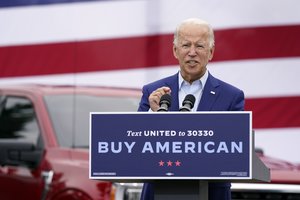 "I'm not looking to punish businesses," Joe Biden said. "But there's a better way. Make it in Michigan, make it in America, make it in places like Warren." (AP Photo/Patrick Semansky)

Speaking in Warren, Michigan, behind a fleet of American-made pickup trucks, Biden blasted the Tax Cuts and Jobs Act

, claiming it rewarded companies that lower their tax payments by moving facilities abroad. Biden said that aside from changes to the 2017 law, he would raise by 10% the tax payments of companies that make products abroad to sell in the U.S., and would also enact a 10% credit for domestic investments.

"If your big corporate strategy is to boost your shareholders' profits and your CEO's bonuses by moving jobs out of America, well, we're going to make sure you not only pay full U.S. taxes on those profits, and then we're going to add an extra 10% offshoring penalty surtax to your bill," Biden said. "I'm not looking to punish businesses. But there's a better way. Make it in Michigan, make it in America, make it in places like Warren."

The details of how these latest taxes would interact with prior Biden campaign proposals remain unclear, and the Biden campaign did not return a request for further details.

The former vice president already called for changes to the tax on global intangible low-taxed income, which is currently a 10.5% levy on some of the foreign profits of U.S. companies. Biden would raise the rate to 21%, while also removing an exemption for tangible depreciable property, ensuring that it would apply to virtually all foreign income of U.S. corporate taxpayers.

On top of this, Biden's campaign would add a surcharge increasing the company's tax liability on foreign income by 10% if that company uses foreign manufacturing facilities to sell products into the U.S. The charge would also apply to companies that remotely supply services to the U.S., including the use of call centers.

But based on the campaign's announcement, it is unclear what the final effective tax rate on this would be, or whether it would be higher than the 28% overall domestic corporate tax rate the campaign has proposed.

Biden also said he would enact a 10% advanceable tax credit for a variety of domestic investments, including "revitalizing" or "retooling" U.S. facilities, and "reshoring" foreign production into the U.S. The credit would also apply to expansion of U.S. facilities or an increase in a company's wages.

Trump has already made carrot-and-stick tax incentives to bring jobs back to the U.S. a mainstay of his stump speeches.

In his Republican National Convention speech on the White House lawn, Trump reiterated calls to punish companies that move jobs to China with tariffs, and reward those that bring jobs from China to the U.S.

"We will make sure our companies and jobs stay in our country, as I've already been doing for quite some time, if you have noticed," Trump said in the Aug. 28 speech. "Joe Biden's agenda is made in China. My agenda is made in the U.S.A."

The White House has yet to clarify these remarks, including whether the president was using China as an example, or if the policy would only apply to that country. The Trump campaign did not return requests for comment.

The rhetoric has some trade experts worried that both candidates are in a spiral of escalating protectionist rhetoric, in the wake of Trump's 2016 win based on an "America First" mantra.

"This is kind of an arms race between the two candidates," said Mary Lovely, a senior fellow at the Peterson Institute for International Economics, a nonpartisan economic think tank.

Applying to a company's overseas tax liability, the 10% surcharge would not raise a company's overall tax rate by more than 3 percentage points — which Lovely claimed would be too small to have much of an effect.

"I think the bigger deal is that it's normalizing it," she said.

Barry Bosworth, a senior fellow at the Brookings Institution, a D.C. think tank, said it recalled the Smoot-Hawley Tariff Act, the infamous 1930s measure that historians believe heightened the economic devastation of the Great Depression.

"I have always found it difficult to distinguish trade policies of many current Democratic politicians and those of Trump," said Bosworth, who was director of the Council on Wage and Price Stability under President Jimmy Carter. "This is a proposal in search of a problem."

Applying to a certain set of companies that sell into the U.S., the surcharge would have some of the same effects as a tariff, said Kyle Pomerleau, a resident fellow at the American Enterprise Institute.

"For U.S.-based firms, part of their calculus here is going to be similar to what their calculus would be under tariffs," he said. "They'll have to think about how much they'll sell into the United States."

But, he added, the increased tax cost of selling into the U.S. wouldn't make a U.S. factory any more profitable.

"What does affect domestic investment is domestic taxation," he said.

The Trump administration's aggressive use of its authority to enact tariffs has escalated economic tensions around the world, which some blame for a decline in U.S. manufacturing.

In the Wednesday speech, Biden also reiterated a plan to recalibrate foreign tax credits to ensure that companies have a U.S. tax payment under GILTI for income earned in any country with a tax rate lower than 21%. The current law applies GILTI on the global level, based on the company's overall effective foreign tax rate.

The campaign also said it would enact stronger rules against inversions, or when a U.S. company converts itself into a foreign-parented one, normally by merging with a smaller offshore entity.

While Biden did not release further details about this plan, the Obama administration proposed rules that would retain U.S. tax residency of any U.S. company that merges but keeps 51% or more of its previous ownership. Former President Barack Obama's tax plans also would redefine tax residency to be based on the real location of the company's headquarters.

But despite these safeguards, the Biden plan's increased focus on the foreign income of U.S. companies could still increase pressure for those companies to drop their U.S. tax residency. One potential route could be through a foreign takeover of a U.S. company.

He would also create a "'Made in America' Office" within the Office of Management and Budget, to ensure that requirements to buy American-made products are followed and that companies do not deceptively repackage foreign goods as domestic.