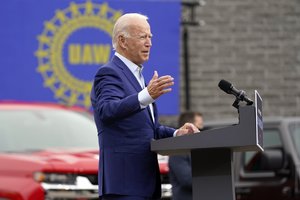 At a campaign event in Michigan, Joe Biden promoted his proposal for a 10% tax credit for investments in domestic manufacturing. The credit would be advanceable, but not refundable. (AP Photo/Patrick Semansky)

Amid a stalemate in Congress on pandemic response legislation, both parties have been proposing tax tweaks that could move in a deal this year or in the next Congress to help domestic manufacturers reverse job losses linked to the novel coronavirus, which causes the respiratory disease COVID-19. But they disagree on how such incentives should be tailored to spur new jobs and growth.

According to the Bureau of Labor Statistics, manufacturing jobs grew on President Donald Trump's watch from 12.4 million in January 2017 to 12.8 million in March 2020, then dropped to 11.5 million in April before rebounding somewhat to 12.1 million in August.

Unlike a refundable credit, which ensures the full value of the credit as a tax offset or a refund regardless of tax liability, an advanceable one can be claimed, or booked, by a company in advance of its annual tax filing, but must be reconciled on the return with taxes owed.

"Make it in Michigan, make it in America, invest in our communities and the workers in places like Warren. That's what this is about," Biden said.

The proposed advanceable incentive attracted praise from Democrats as part of Biden's plan for reshaping the 2017 Tax Cuts and Jobs Act.

But it drew criticism from Republicans, who have promoted more generous refundable business credits and an expansion of temporary business incentives in the tax overhaul, such as full expensing of business equipment.

Sen. Chris Coons, D-Del., an adviser to the Biden campaign, told Law360 that Biden's vision for helping manufacturers with advanceable, rather than refundable, tax incentives was part of his broader plan for engaging "in the competition with China for innovation and for opportunity globally in a way that won't just build stock prices, but will build promising middle-class careers." He said Biden was sure to emphasize such domestic manufacturing incentives as part of his broader plan for raising taxes on wealthy taxpayers and corporations, and helping working families.

But Sen. Rob Portman, R-Ohio, a senior member of the Senate Finance Committee, said he and other Republicans hoped to explore and promote the idea of refundable credits, rather than credits that are just advanceable, to help manufacturers and other businesses.

"More companies are going to use it," Portman said, referring to the potentially stronger appeal of a refundable tax credit compared with an advanceable one. He questioned whether some companies eligible for the proposed new advanceable credit for domestic manufacturing could also face tax hikes proposed by Biden.

Under a new domestic manufacturing framework, Biden proposed to set a 30.8% rate — a 10% offshoring surtax in addition to a proposed new 28% corporate rate — on profits from U.S.-bound goods produced overseas by a U.S. company.

"Those offset each other," Portman said, referring to the advanceable domestic manufacturing credit and the offshoring surtax.

In addition to potential offsetting effects of other tax proposals, Alex Brill, a senior fellow at the American Enterprise Institute, a center-right think tank, said that businesses would need to take care in deciding whether and how to claim the type of incentive Biden proposed.

"The use of the advanceable credit could be uncertain because it could turn out that a business cannot claim the full value of the credit. A refundable credit does not suffer from this risk," Brill, a former policy director and chief economist of the House Ways and Means Committee, told Law360.

Despite such concerns about the effective appeal and implementation of an advanceable credit, Democrats predict such an incentive would help to lift domestic factories, and would work well in tandem with other parts of Biden's tax plan.

If Biden wins, Coons and Sen. Debbie Stabenow, D-Mich., a senior member of the Finance Committee, predicted Democrats will be unified behind Biden's blueprint because it resembles past Democratic proposals to expand domestic manufacturing and discourage offshore production. For example, Stabenow offered a proposal in the last Congress to provide a 20% tax credit for the corporate cost of launching a U.S. factory to replace one abroad, combined with a denial of deductions for the cost of moving certain domestic operations to a foreign country.

But Sen. Jerry Moran, R-Kan., a former chairman of the Republican Senatorial Campaign Committee, predicted that if Trump wins, there will be broad GOP support for Trump's vision for broadening items in the 2017 tax overhaul and for delivering a few targeted incentives for domestic manufacturers in certain sectors, including the aviation industry.

He said domestic manufacturers needed more help to follow up on incentives in the tax overhaul, including a one-time allowance for deemed repatriation of offshore earnings at a transition tax rate of 15.5% rate for cash and an 8% rate for illiquid assets.

"We must address this issue of manufacturing. It's important for the country. It is important in our exports and in world trade. Our manufacturing has been significantly harmed," Moran told Law360. He and other Republicans argued a recovery was underway, but also said some sectors of industry lagged behind others and needed new incentives.

In an airport hangar in Freeland, Michigan, on Thursday, Trump argued for building on business incentives in the tax overhaul and signaled his support for expanding domestic production of essential goods. He also has called for tax cuts for investors and middle-income workers.

"Over the next four years, we will make America into the manufacturing superpower of the world, and we will end our reliance on China once and for all," Trump said.

While promoting broader tax cuts for businesses, investors and some workers, Trump has not outlined his own targeted incentives for domestic manufacturers, but has signaled general support for ideas backed by Republicans. A Senate GOP pandemic response package included a proposal by Sen. Lindsey Graham, R-S.C., for a 30% tax credit for investment in domestic factories making qualified medical supplies and personal protective equipment, and some GOP lawmakers have backed incentives for domestic chipmakers.

Portman has continued to explore ways to provide refundable versions of some existing business incentives. That initiative has drawn support from business advocates including the National Association of Manufacturers. In a June 25 letter, the group urged leaders of the two tax-writing panels, the House Ways and Means Committee and the Senate Finance Committee, to make a number of business incentives refundable "on an elective basis." Among these would be credits for research and development, renewable energy and work opportunity.

Regardless how the elections turn out, several lawmakers in both parties said a number of proposals for helping domestic manufacturers were sure to be on the table next year as part of negotiations on plans to follow up on the Coronavirus Aid, Relief and Economic Security Act

"Absolutely," said Coons, a co-chairman of the Senate Competitiveness Caucus, when asked about the prospects for building bipartisan coalitions to support new incentives for domestic manufacturers.

Blunt told Law360: "Bringing back jobs to the U.S. is always popular. This time, it's also timely."