Pennsylvania's top tax administrator expressed reservations Wednesday about eliminating the state's 20-year net operating loss carryforward cap amid estimates that tax collections could fall $4 billion below prior projections for several years due to the COVID-19 pandemic. 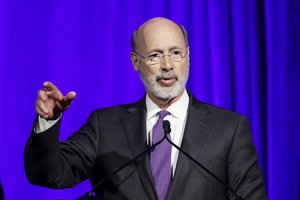 Gov. Tom Wolf has pushed a switch to combined reporting for several years, arguing it would curtail income shifting and be fairer to in-state corporations.  (AP Photo/Matt Rourke)

Revenue Secretary Dan Hassell told the state House Finance Committee during a hearing about how the pandemic has hampered Pennsylvania's revenue collections that he has looked askance at a bill that proposes to do away with the 20-year NOL carryover cap. The committee passed the bill on Sept. 2.

"Our concern about extending the carryover of net operating losses is simply that we have a system now that allows companies to create accounting fiction type losses, and extending the ability to use those losses to even more years seems like going in the wrong direction," Hassell said.

Hassell's comments came in response to a question from Rep. Jake Wheatley Jr., D-Pittsburgh, about the long-term fiscal impact of the legislation, H.B. 2420. Earlier in the hearing, a presentation from the state Department of Revenue estimated that Pennsylvania's annual tax collections will be about $4 billion below prior estimates through at least fiscal year 2024-25 due the spread of the novel coronavirus, which causes the respiratory illness COVID-19.

Rather than passing a bill to uncap the NOL limitation on its own, Hassell said he would favor incorporating it into Gov. Tom Wolf's proposal to switch the state to combined reporting and lower the corporate net income tax rate from 9.99% to 5.99% over several years. Hassell said that H.B. 2420 "addresses the symptoms" of problems with the corporate tax code instead of the "root cause."

"The governor's proposal to reform the system entirely, which includes uncapping the net operating loss carryover prospectively, that is a far better solution," he said.

As a separate reporting state, Pennsylvania requires companies to individually file their own corporate tax return. Combined reporting requires a parent corporation and its subsidiaries that are part of a unitary group to report their income on one return and can require companies to add their profits together.

Wolf, a Democrat, has pushed a switch to combined reporting for several years, arguing it would curtail income shifting and be fairer to in-state corporations. But the proposal's opponents, including the General Assembly's Republican leadership, have remained steadfast in their opposition to it, saying that cutting the corporate tax rate still wouldn't offset the tax increases that would result on several companies if Pennsylvania changed to a combined reporting regime.

Wheatley was the only committee member who made mention of the NOL bill and combined reporting, while other members said they were focused on digesting the tax projections while they craft a budget to run through the rest of the fiscal year, which ends June 30. Pennsylvania previously enacted a short-term budget that will only fund most state agencies through the end of November to allow lawmakers flexibility to account for the pandemic.

Committee Chairman Michael Peifer, R-Hawley, asked Hassell if the department had an estimate of the current budget deficit that Pennsylvania may be facing, but the secretary said the tax agency's report only dealt with revenue collections. A full picture of any budget shortfall would also have to account for state spending, Hassell said.

Regardless, the state's bleaker fiscal forecasts are likely to stretch beyond the current and upcoming fiscal year, according to the department's presentation.

Amy Gill, the department's deputy secretary for tax policy, told the committee that general fund collections are not estimated to exceed their fiscal year 2018-19 levels until fiscal year 2023-24, and the state's unemployment level would not return to its 2019 levels until 2024. Pennsylvania's unemployment rate in July was 13.7%, and 4.4% in July 2019, according to data from the U.S. Bureau of Labor Statistics.

Conservative lawmakers have consistently sparred with the governor over his orders to close businesses and restrict crowd sizes during the pandemic. A federal judge on Monday sided with several Republicans and businesses in ruling that Wolf's coronavirus-related shutdown was unconstitutional. The governor has since said he will appeal the decision.