Eric Trump Must Give Deposition Before Election, Judge Rules

Eric Trump can't wait until after the November election to sit for a deposition in the state attorney general's office probe into whether President Donald Trump inflated the value of his assets, a New York judge ruled Wednesday. 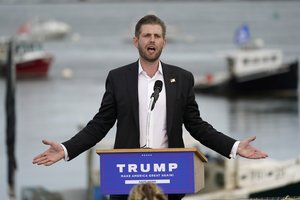 Under a judge's ruling, Eric Trump must sit for a deposition no later than Oct. 7. (AP Photo/Robert F. Bukaty)

New York state Supreme Court Judge Arthur Engoron ruled from the bench that Eric Trump must sit for a deposition no later than Oct. 7, rejecting the request by attorneys for the president's son that he sit only after the Nov. 3 presidential election.

Eric Trump's attorneys had told the court last week that the deposition should happen after the election because of his travel schedule, unavailability and to "avoid the use of his deposition attendance for political purposes." They also cited a so-called 60-day period during which law enforcement and agencies should avoid "certain actions" before an election.

"Mr. Trump cites no authority in support of his request. And in any event, neither petitioner nor this court is bound by timelines of the national election," the judge said.

New York Attorney General Letitia James last month announced a motion requesting the court to compel the Trump Organization, Morgan Lewis & Bockius LLP, Eric Trump and others to supply information in response to a probe that includes whether President Donald Trump or the Trump Organization artificially inflated the value of assets for tax and other benefits. That includes whether they inflated the value of Seven Springs Estate, an approximately 212-acre property in Westchester County, to claim a $21.1 million tax deduction in 2015.

The judge on Wednesday also largely ruled that various parties that have been subpoenaed must hand over records to James' office as part of the probe, and granted requests to seal much of the records in the case. Judge Engoron added that he would review other records that he didn't order to be handed over to see if they meet various privileged standards that have been invoked.

Those subpoenaed by James' office had told the court they're looking to preserve attorney-client and other privileges, while James' office has said they've made overbroad privilege objections.

After the decision, James' office in a statement called the decision a major victory in its investigation and a win for "justice and the rule of law." She said the office will immediately move to ensure the president and the Trump Organization comply with the court's order and submit financial records related to its investigation.

"Eric Trump will no longer be able to delay his interview and will be sitting down with investigators in my office no later than Oct. 7," James said. "To be clear, no entity or individual is allowed to dictate how or when our investigation will proceed or set the parameters of a lawful investigation."

James' office noted it hasn't reached any conclusions in its continuing investigation.

Eric Trump, in a statement, slammed James as politically motivated but said he will comply with the subpoena.

"The New York attorney general has called my father an 'illegitimate' president and pledged to take him down while she was running for office," Eric Trump said. "Her actions since demonstrate a continued political vendetta and attempt to interfere with the upcoming election. That said, since I previously agreed to appear for an interview, I will do so as scheduled."

Marc L. Mukasey of Mukasey Frenchman & Sklaroff LLP, an attorney for Eric Trump, told Law360 Eric Trump "has nothing to hide and did nothing wrong."

"Neither did anybody else. This is simply a matter of scheduling," Mukasey said.

In the ruling, the judge noted no opposition papers filed by the various respondents contained an affidavit from anyone with personal knowledge of the factual matters at issue, saying that alone arguably justified granting the attorney general's petition in its entirety.

The judge agreed with James' office that the Trump Organization isn't permitted to attend any depositions the office may conduct with the various parties subpoenaed in the probe. But to the extent the depositions of the parties may deal with privilege, the judge said the court will maintain jurisdiction in the case to rule on those matters. He ordered depositions to continue no later than Oct. 23 of Trump Organization Chief Financial Officer Allen Weisselberg, Morgan Lewis partner Sheri Dillon and land use lawyer Charles Martabano.

Further, the judge said the Trump Organization has specifically waived privilege for all documents responsive to subpoenas that are in the possession of Cushman and Wakefield, an appraiser and commercial real estate services company that worked on the Seven Springs venture. He ordered the records to be produced by Oct. 2.

During oral arguments on Wednesday, attorneys representing many of the parties in the case argued various privileges applied that didn't allow the attorney general's office to compel them to hand over records or testify about certain elements of their work with the Trump Organization.

Lawrence S. Rosen, of LaRocca Hornik Rosen & Greenberg LLP, who represents the Trump Organization and several other Trump entities, told the court the law under which James' office is investigating the deals requires proving repeated or persistent fraudulent acts. But because there are only two recent easements being probed, he argued James' office is trying to obtain records into a settlement with the Internal Revenue Service made in 2005 regarding an easement at the president's golf course in Bedminster, New Jersey.

"What they've done somewhat disingenuously is bootstrap this 2005 easement and try to pretend it's a 2012 or 2013 [easement], but really those were just the settlement discussions," Rosen said.

But the judge rejected arguments over "settlement privilege" and ordered Morgan Lewis to turn over by Oct. 2 all documents it said were privileged because they came from a settlement.

The decision from the state judge comes a day before a federal appeals court hearing over whether a Manhattan grand jury can subpoena tax and business records from Mazars.

Charles Martabano, a lawyer who worked with the Trump Organization in the potential development of the Seven Springs property, is represented by George J. Calcagnini.

Update: This story has been updated to include more details from the ruling.