Arizona voters appear to have approved a ballot measure that will impose a 3.5% income tax surcharge on the state's highest earners, which is estimated to raise up to $940 million annually to fund education programs. 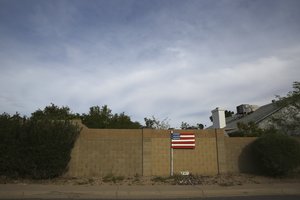 A home in Phoenix, Arizona. The state's citizens appeared to have approved Proposition 208, which would levy a 3.5% income tax surcharge on Arizona's highest earners. (AP Photo/Dario Lopez-Mills)

As of Friday morning, the measure on Tuesday's ballot was approved 52% to 48% with 92.2% of the votes reported.

The outcome is a victory for proponents of the measure, including the Arizona Education Association, which pushed for a tax increase on high earners for several years as a means to infuse critical cash into the state's school programs. The initiative's supporters have projected that the measure could generate about $940 million in extra revenue annually.

Joe Thomas, the association's president, said in a statement that the measure's passage will provide a much-needed boost to school funding in the state.

"By voting yes on 208, Arizona voters made it loud and clear they want teachers to be compensated properly and have the resources needed to successfully educate their students," Thomas said.

An Arizona Chamber of Commerce and Industry committee that spearheaded opposition to the measure had argued that its passage would hurt small-business owners of pass-through companies. The committee, Arizonans for Great Schools and a Strong Economy, billed the initiative as a de facto 77.7% tax increase on the state's highest earners that wouldn't meet the revenue projections the measure's proponents touted.

Garrick Taylor, the chamber's spokesperson, told Law360 on Friday that the measure's passage will reduce the competitiveness of Arizona's economic climate.

"Arizona now, unfortunately, has one of the country's 10-highest tax rates, and states with high income taxes typically struggle economically," Taylor said. "But we believe Arizona's best days are ahead, so it's back to work to make Arizona once again an attractive place for job creators."

The question was similar to an income tax increase measure that the state Supreme Court blocked from the ballot in 2018 after finding the initiative's summary on petitions signed by voters was misleading.

The support and opposition for this year's measure, the Invest in Education Act, were nearly identical to that for the 2018 question. Jaime Molera, chair of the committee opposed to the 2020 question, led the litigation against the 2018 measure and also mounted an unsuccessful legal challenge to this year's initiative.

Maricopa County Superior Court Judge Christopher A. Coury sided with Molera and ruled that the petitions for the 2020 measure were misleading, but the state Supreme Court unanimously overturned his ruling and reinstated the measure's eligibility for the ballot in August. The justices issued an expedited ruling without an opinion to accommodate the election cycle's deadlines.

The final language of the ballot measure was also the subject of a squabble between the Arizona secretary of state and the state attorney general, who disagreed over whether the language on the ballot should specify that the measure would result in a new effective top tax rate of 8%.

Attorney General Mark Brnovich's office had pushed for the language to say that voters would be approving a new 8% total top tax rate, which Secretary of State Katie Hobbs' office said was unnecessary. In the end the offices agreed to compromise wording that said the 3.5% surcharge would be imposed in addition to existing tax rates.

Update: This story has been updated with a response from the chamber.