Illinois defeated a constitutional amendment Tuesday that sought to eliminate a prohibition against a graduated income tax and enact companion legislation that would have scrapped the state's flat tax in exchange for creating six tax brackets next year. 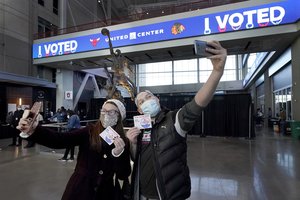 Samantha Jones, left, and Peter Vina took selfies Tuesday in the atrium of Chicago's United Center, which had been transformed into a voting site. (AP Photo/Charles Rex Arbogast)

for income tax to be imposed at a flat rate. The result also negates companion legislation passed last year that would have replaced the state's 4.95% personal income tax rate with rates ranging from 4.75% to 7.99%, and increased the corporation tax rate to 7.99% from 7%. The new rates would have taken effect for tax years beginning on or after Jan. 1, 2021.

The amendment's defeat is a win for business groups and conservative lawmakers who lobbied hard against the amendment, claiming that switching to a graduated income tax would make Illinois' tax landscape less competitive and lower the bar to pass future tax increases.

Republicans, who are vastly outnumbered by Democrats in the General Assembly, had also said that the amendment's passage would hamper the state's recovery from the novel coronavirus pandemic because it would raise taxes "at the worst possible time."

Todd Maisch, president of the Illinois Chamber of Commerce, said in a statement that the results proved that residents were averse to approving a tax increase in the current economic climate.

The outcome is a setback for Democratic Gov. J.B. Pritzker, who supported the proposal as a "fair tax." The governor has said the amendment and the companion bill could raise about $3.4 billion annually while only increasing taxes on the top 3% of the state's earners. In addition to championing the amendment through the General Assembly, Pritzker helped bankroll a campaign that pushed its passage.

Pritzker had said that approval of the question would have taken some of the financial pressure off the state in the short term. The governor's office has estimated that the state will face a $7.4 billion budget shortfall next year if the amendment failed to pass, but that gap would have shrunk to $6.2 billion if the question were approved.

Quentin Fulks, chairman of the Vote Yes for Fairness committee that was supporting the measure, said in a statement that he was disappointed that the amendment failed because it narrows the options for the state to address its budget issues.

"Now lawmakers must address a multibillion-dollar budget gap without the ability to ask the wealthy to pay their fair share," Fulks said. "Fair tax opponents must answer for whatever comes next."

In September, the left-leaning Institute on Taxation and Economic Policy said in a study that the state's flat income tax had exacerbated the racial wealth gap and that the amendment's passage would result in a fairer tax system for minorities. The study found that Black and Hispanic households in Illinois that make less than $250,000 annually have paid $4 billion more a year under a flat tax rate than they would under the proposed graduated tax.

The Illinois Policy Institute, a free-market think tank that was one of the amendment's sharpest critics, joined several retirees in an October lawsuit alleging that the amendment's ballot language was misleading for failing to characterize the freedom that the state would have to change tax rates in the future.

Cook County Circuit Judge Celia G. Gamrath denied the institute's request for a temporary restraining order on Oct. 9 that sought to have the state issue "corrective notices" about the question to the electorate. However, the institute vowed to press on with the case, noting that the dispute wasn't dismissed in its entirety.

Institute President Matt Paprocki praised the election's outcome in a statement, saying that voters recognized that the amendment  "would be devastating" for residents statewide.

"lllinoisans made their voices heard and sent a clear message to Illinois politicians: 'We want to keep our constitutional flat-tax protection,'" he said.

A representative for Pritzker did not immediately respond to a request for comment on Wednesday.