California voters rejected a groundbreaking overhaul of the property tax regime of the nation's largest state, one that would have effectively removed commercial and industrial properties from the protection of Proposition 13. 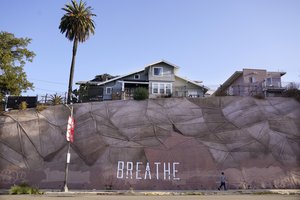 A hillside on Sunset Boulevard in Los Angeles displayed a one-word message Wednesday. The day before, California voters rejected a ballot measure that would have removed commercial and industrial properties from the protection of Proposition 13, passed in 1978. (AP Photo/Chris Pizzello)

With 51.69% voting no and 48.31% voting yes as of Thursday morning, the state's voters on Tuesday gave a thumbs-down to Proposition 15, one of the most hotly contested ballot measures anywhere in the nation this election. Proposition 15, as it is called, drew well over $100 million in efforts to pass or defeat it, including nearly $13 million in favor of the measure from Facebook founder Mark Zuckerberg and his wife, Dr. Priscilla Chan. The spending on Prop 15 was the second highest for any ballot measure in the nation.

The measure, according to its supporters, would have raised up to $12.5 billion for schools and community colleges by taxing commercial and industrial properties on their fair market value.

Because of the no vote, all such properties, along with residential properties, will continue to be taxed under Proposition 13, a 42-year-old law that, because of its limitations, has had implications for broad-based taxes throughout California. Under Proposition 13, the purchase price is used to assess and tax all residential, commercial and industrial properties, and tax is limited to 1% of the purchase price with minimal annual adjustments for inflation.

The rejection of Proposition 15 seemed to indicate that voters like the system, and regarded the attempt to change it as a large tax increase, which is the way Proposition 15 opponents had framed the measure.

Proposition 15 died at the ballot box Tuesday despite getting a boost in September when California's governor threw his support behind the initiative. In a statement Sept. 11, Gov. Gavin Newsom, a Democrat, ended months of speculation when he said he would endorse Proposition 15 as a way to improve revenues that have been hurt by the novel coronavirus pandemic.

"It's a fair, phased-in and long-overdue reform to state tax policy, it's consistent with California's progressive fiscal values, it will exempt small businesses and residential property owners," the governor said then. "Most importantly, it will be decided by a vote of the people."

The exemption for small businesses was part of a revision to Proposition 15 that the campaign behind the measure, called Schools and Communities First, submitted April 2. The revised measure exempted from the plan those businesses with less than $3 million in real estate in California. The new version also exempted businesses with 50 or fewer employees that own real estate in California, and allowed more time to phase in fair market value taxation by beginning the change on Jan. 1, 2022, instead of making it retroactive to Jan. 1 of this year.

Those changes were designed to protect small businesses and make the plan easier to administer. But it never changed the minds of opponents and skeptics, who included commercial and industrial property owners, tax and real estate lawyers, and county assessors.

Proposition 15 would have put a substantial burden on county assessors, according to Larry Stone, assessor for Santa Clara County. Stone, who also chairs the subcommittee on the topic for the California Assessors' Association, told Law360 earlier that the 58 county assessors in California were not equipped to handle such a monumental change in taxation, and the revised proposal did nothing to address that.