Renter Credit Could Be Pillar Of 2021 Dem Relief Package

New tax incentives to help renters cover housing costs are gaining traction with Democratic lawmakers as they begin to shape their priorities for a stimulus package in the next Congress to counter the economic effects of the novel coronavirus pandemic. 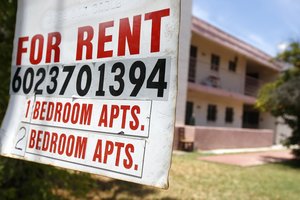 Some Republicans have pushed back against new tax breaks for renters while supporting other measures aimed at helping them. A rental sign is posted in front of a Phoenix apartment complex in July. (AP Photo/Ross D. Franklin)

Democratic presidential nominee Joe Biden has taken the lead in promoting a refundable tax credit aimed at ensuring moderate- and low-income families pay no more than 30% of their income on rent as they deal with economic fallout from the novel coronavirus pandemic. Both parties remain at odds over the scope of the next pandemic response package, and have begun to lay out plans for trying to advance their priorities in the next Congress if there is no agreement.

House Ways and Means Chairman Richard Neal, D-Mass., stopped short of embracing Biden's proposal. But Neal made it clear he was open to tax incentives that could go beyond measures enacted in the Coronavirus Aid, Relief and Economic Security Act

— and similar items passed by the House last week in a now-stalled pandemic response package — including cash for rental assistance and a temporary ban on evictions. Neal has been eying prospects both for a possible session-ending package that includes disaster and retirement savings incentives and extensions of expiring temporary tax incentives, as well as an economic stimulus package to move in 2021.

"We've got to address this issue," Neal told Law360. He added that Congress must help workers struggling to pay their rent "because that's going to work its way into a contagion for community bankers and for credit unions if property owners are not able to make their mortgage payments and pay their local taxes."

Proponents such as Rep. Danny Davis, D-Ill., a member of Ways and Means, said he believed the proposal for refundable tax credits for renters would be in a strong position to advance in a potential bicameral deal on an economic stimulus package early next year if Biden wins and has Democratic majorities to work with in the House and Senate. He said he hoped to promote the proposed new refundable tax credit with Biden.

Davis said lawmakers would need to work out potential restrictions such as limits on the overall cost of refundable credits, which would be capped at $5 billion under the Biden plan. Davis said he hoped to promote some of the ideas in his Rent Relief Act proposal, H.R. 2169, which would limit eligibility for refundable tax credits to families with incomes of no more than $100,000 or no more than $125,000 in certain high-cost areas. Sen. Kamala Harris, D-Calif., Biden's running mate, has backed a companion bill in the Senate.

For their part, some Republicans have pushed back against new tax breaks for renters while supporting other measures aimed at helping them, including an order by the U.S. Centers for Disease Control and Prevention to temporarily halt evictions through December of individuals earning no more than $99,000 or married couples earning no more than $198,000.

Rep. Ron Estes, R-Kan., a member of Ways and Means, said he was skeptical of whether there was a need for creating new tax incentives for renters.

"I'm not sure we need a new program. If the concern is that the programs that are out there today aren't adequate enough, then let's talk about that," Estes told Law360.

aimed at covering the portion of monthly rent that exceeds 30% of the monthly income of qualifying families who make less than 80% of the local area median income. Such vouchers represent a form of rental assistance first authorized under Section 8 of the 1937 Housing Act.

Biden and other Democrats argue there are waiting lists and inadequate resources for existing affordable housing programs and make the case that new tax incentives could help certain workers whose earnings exceed income caps for Section 8 vouchers. For example, Biden has advocated for tax incentives for renters as part of a broader economic plan that calls for uprooting the 2017 tax cuts for corporations and wealthy taxpayers.

The National Low Income Housing Coalition, an affordable housing advocacy group, said the new tax credits could help 11 million renters — representing a quarter of all residential tenants — who pay more than half their income in rent.

Sarah Saadian, the housing coalition's vice president of public policy, said she hoped the next Congress could have several legislative vehicles to carry various incentives for low-income renters.

"We support the creation of a renter's tax credit to make housing more affordable to people with the lowest incomes. The issue is only one in four people eligible for housing assistance get it, so we need to significantly expand investment in Section 8 vouchers or in a renter's tax credit," Saadian told Law360.

But some business advocates argue that federal resources should be focused on other types of aid aimed at expanding the supply of affordable housing.

"While renter tax credit policies may appear to bring relief to low- and moderate-income households, they do nothing to increase housing supply or encourage development and therefore do not address our nation's housing affordability crisis," Greg Brown, a senior vice president of government affairs for the National Apartment Association, said in a written statement to Law360.

Brown said his group backed "policies that increase funding for existing and successful programs that assist cost-burdened households, like the Low-Income Housing Tax Credit and Section 8 Housing Choice Voucher programs, alongside efforts to lower the legal and regulatory barriers to the construction of new affordable housing."

Despite such concerns, Sen. Mike Crapo, R-Idaho, a senior member of the Finance Committee, said he believed proposals by Biden and Democratic lawmakers for new tax incentives for renters could be examined as part of continuing negotiations to develop a stimulus package to address economic effects of the novel coronavirus, which causes a respiratory disease, COVID-19.

Crapo voiced concern that a new tax credit could compete for resources with other existing tax incentives aimed at promoting the development of affordable housing. While pushing back against a permanent new tax incentive, he said he might be open to a temporary one, perhaps as part of a broader pandemic response package.

"I think that we do need to have some sort of rental assistance in the context of those who have had an impact from COVID-19 on their ability to pay rent. You can use many different mechanisms. In that context, I would be open to something like that," Crapo told Law360.