Pa. To Study Congestion Pricing Amid $8.1B Funding Gap

Pennsylvania will explore congestion pricing and a fee on miles driven to fill an $8.1 billion gap in road funding, the state Department of Transportation announced Wednesday, saying the gas tax is no longer a reliable source of revenue. 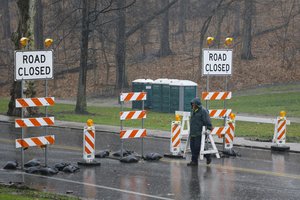 The dip in revenue from gas tax for road funding has caused Pennsylvania to look at other options, including congestion pricing, the state Department of Transportation said Wednesday. (AP Photo/Keith Srakocic)

The department said it is starting a wide-ranging study of viable infrastructure revenue options, including congestion pricing, which would charge motorists a toll for driving through high-traffic areas, a road user charge based on annual miles driven and other tax increases. Public feedback on the potential funding proposals will be accepted through Dec. 17, according to the department.

Pennsylvania faces an annual $8.1 billion shortfall to meet its road repair and maintenance obligations, the department said. The state is compelled to look for more revenue sources because its gas taxes, which comprise 74% of the highway and bridge funding and were once the stalwart of infrastructure revenue, "have become increasingly unreliable," the statement said.

The spread of COVID-19, the respiratory illness caused by the novel coronavirus, has further endangered the state's reliance on gas taxes, as reduced traveling has caused a corresponding dip in gas tax collections, the department said.

According to a Nov. 2 report from the state Department of Revenue, collections for the motor license fund, which includes the gas taxes, are currently 0.6%, or $6.1 million below estimates for the current fiscal year. Collections for that fund for the prior fiscal year that ended June 30 were 6.5%, or $186.4 million, below estimates, according to a July report from the tax agency.

"We take our responsibility as stewards of mobility very seriously, which is why we must explore our options," state Transportation Secretary Yassmin Gramian said in a statement.

The study overview and funding options posted to the transportation department's website didn't contain many specifics, saying only that toll hikes, congestion pricing, a road user charge and increases of vehicle-related fees and other taxes will be explored. However, the website added that a gas tax increase would not be considered.

State Transportation spokesperson Alexis Campbell told Law360 that Democratic Gov. Tom Wolf has promised not to seek a gas tax increase at this juncture. Pennsylvania already imposes one of the highest gas tax rates in the nation, at 58.7 cents per gallon on gas and a 75.2 cents per gallon on diesel, according to the American Petroleum Institute.

Campbell said the study began to take shape after the pandemic began, but the need for alternative revenue streams has been evident for a while.

"While COVID-19 certainly hasn't helped, funding for interstate and expressway bridges has been eroding for decades due to increasing fuel efficiency, inflation, and lack of meaningful federal action, and those needs grow every year," Campbell said.

Regarding the road user charge, the department's website said the levy could be "tied to GPS technologies" to calculate the number of miles driven, and require drivers to pay a "small fee" for each mile they drive in a year.

Revenue estimates for the potential programs have not yet been ascertained and will be determined in the study, Campbell said.

Ulrik Boesen, a senior policy analyst at the conservative-leaning Tax Foundation, told Law360 that a per-mile tax, akin to the road usage fee that Pennsylvania's study will explore, would be the best proxy for the gas tax as it becomes more antiquated. The charge would ensure that the more drivers use the roads, the more they would pay for their upkeep, he said.

"Instead of trying to tax the gallon, which is becoming less and less relevant, you simply tax the mile," Boesen said.

However, Boesen noted that certain privacy concerns can accompany such a charge, as drivers may have to permit states to allow GPS to track their vehicles. He said Pennsylvania could consider a charge based on odometer readings instead, if residents raised privacy issues with a tracking mechanism.

Oregon currently runs a pilot road usage charge program, although Boesen said that its participation is small and voluntary. Going forward, he said he anticipates that other states may also and look to other revenue sources to supplement their gas taxes.

"If you're only adjusting the gas tax, you'll see the funding issue again in five or six years," he said.

Campbell said the study may also explore raising fees related to driver's licenses and motor vehicles, as well as increasing taxes on vehicle batteries or tires.

Any revenue proposal from the department would need approval from the state's Republican-led General Assembly, which has stymied several tax plans that Wolf's administration has floated, including his push to impose a severance tax and switch to combined reporting.

A representative for Senate Majority Leader Jake Corman, R-Bellefonte, referred questions to the Senate Transportation Committee. The chair of that committee, Sen. Kim Ward, R-Greensburg, did not immediately respond to a request for comment.

A representative for House Majority Leader Kerry Benninghoff, R-Bellefonte, did not respond to a request for comment.