The $900 billion omnibus COVID-19 relief legislation signed Dec. 27 added new complexity for state tax professionals, even as they still struggle with the lack of guidance from many states on the original relief bill signed 10 months ago. 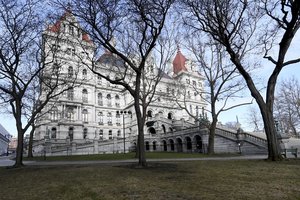 The New York State Capitol in Albany. Tax professionals are struggling with the lack of guidance from state governments on provisions in both novel coronavirus relief bills.(AP Photo/Hans Pennink)

The coronavirus relief portion of the Consolidated Appropriations Act

clarifies that expenses paid for with money from Paycheck Protection Program loans created under the Coronavirus Aid, Relief and Economic Security Act would be deductible for federal income tax purposes. In the CARES Act passed in March, it was only clear that the loan income itself would be excluded from federal taxable income.

But even as state tax professionals wonder if states will conform to that change, they are still uncertain about conformity with provisions in the original CARES Act. That law is now nearly 10 months old, but many states still have not decided if and how they will conform with provisions including the treatment of net operating losses, pass-through entities and business interest expenses.

On PPP loans, some states have conformed with the federal income exclusion, issuing guidance that PPP income is not subject to state income tax. But so far only Mississippi, Alabama and North Carolina have issued guidance concerning the deductibility of expenses, and it is unclear how many other states will follow their lead.

"I think there's so much uncertainty out there, at the federal level and at the state level," Kelley Miller, tax partner at Reed Smith LLP, told Law360. "It's going to be a really challenging couple of months until we get a good strategy going forward for clients as to what they can and cannot do."

The PPP loan deductibility change comes right before the beginning of tax season, and that alone is going to present challenges for taxpayers and for states, Robert Houston, tax specialty services leader with BPM, told Law360.

was passed, noting that filing was often delayed because states didn't even have time to make new forms. He said that is likely to happen again here, even for states that do conform, but added he wasn't sure how many would.

States "may not be able to afford to just wholesale take what the federal government has done," Houston said. "And they don't have time — tax filing season is now. And [deductibility would be] retroactive all the way back to when you first got your PPP loan."

Meanwhile, some states still have not decided if and how they will conform to other business-friendly tax provisions in the CARES Act, including relaxation of the net operating loss regime. The CARES Act's NOL changes allow more losses to be deducted immediately instead of carried forward and allows for NOL carrybacks from 2018 to 2020 so taxpayers can get a refund.

The changes also remove, for those same years, a limitation on the ability of pass-through businesses to use NOLs to offset nonbusiness income.

of the Internal Revenue Code, to 50%. And it allows, retroactively for tax years 2018 and 2019 and also for 2020, pass-through businesses to deduct an unlimited amount of business losses to offset nonbusiness income.

Michael Mazerov, senior fellow at the Center on Budget and Policy Priorities, said about half of the states, those with "rolling" conformity, have likely lost revenue already because they automatically follow federal tax changes unless they specifically decouple.

Mazerov said he knew of only five states that had specifically decoupled from the CARES Act business provisions, but said he thought they all should in the upcoming 2021 legislative sessions. States cannot afford the revenue loss they would incur by continuing to follow the federal government on such business-friendly provisions, he said.

"The new legislative sessions provide them an opportunity," Mazerov said. "It's very, very surprising to me, how few states took this up" in 2020.

Some states may have simply run out of time as they rushed to complete business last spring as the pandemic began to strike hard in the U.S. But now that they are beginning new legislative sessions and the consequences of whether to conform or not have become clear, it is likely that states will actively address the issue, said Scott Smith, national technical leader for state and local tax for BDO USA.

"I am a bit skeptical as to how many states will really conform to a lot of the CARES Act provisions," Smith said. "Their budgets have been hit hard" by the effects of the coronavirus.

It all adds up to many unknowns. Practitioners said filing could be complex and taxpayers, especially when filing in rolling conformity states, will have to make assumptions. Guidance is fairly scarce — on PPP loan conformity, for example, fewer than half of states have expressly stated that they will conform or not to provisions excluding PPP proceeds from taxable income.

On the new issue of deductibility of expenses paid for by PPP loans, North Carolina has said it will not conform. Alabama on Thursday said it will — a position practitioners are "very pleased" with, Bruce Ely of Bradley Arant Boult Cummings LLP told Law360.

Mississippi will conform as well, which is good news for taxpayers, said John Fletcher of Jones Walker LLP. But Fletcher said he did not think many practitioners were aware that the state had made a decision. He said he was trying to get the word out, and also to tell taxpayers to be on their guard lest the state change its mind.

He said he hoped that more states would make clear where they stand. If they do not, "it just may have to be accepted" that static conformity states are not going to allow PPP loans to be excluded from income or expenses to be deducted. A static conformity state is one that picks a specific date on which it will conform to the federal revenue code.

On the other hand, Zavaglia said, taxpayers filing in rolling conformity states will just surmise that they can exclude PPP loan income and deduct expenses.

"I think there's a call to a lot of states to clarify, especially rolling conformity states, if they [ultimately] expect taxpayers to take an alternative position," he said.

One way to clear up some uncertainty would be to look to the intent of Congress, Michael Wiener, tax partner at Greenberg Glusker, told Law360. He said the point of the CARES Act and the follow-up supplemental appropriations law is that individuals and businesses are struggling, and this is one way to help. States should not opt out of providing relief, Wiener said.

"Congressional intent was very clear," Wiener said. "I would advocate for conforming wholesale to the federal legislation."