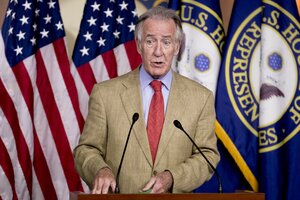 The committee will move swiftly to provide relief during the novel coronavirus pandemic, Neal, D-Mass., told Law360, following a meeting called to formally organize the panel's leadership, membership and rules for the 117th Congress. Ways and Means is tasked with marking up the portions of the pandemic relief proposal under its jurisdiction, including taxes, unemployment benefits and health care.

"Arguably the greatest risk that lies ahead of our committee and the Congress is not doing enough to soundly eradicate the pandemic and protect Americans who are suffering," Neal said during the meeting. "Saving lives and livelihoods are two causes that should unite all members of Congress, regardless of party. There is nothing partisan about helping your fellow American through their darkest days."

The committee hasn't formally announced next week's markup, but Neal said he expects it to last three days. Legislative text of the American Rescue Plan hasn't been released yet, but the House passed a budget resolution on Wednesday that will allow the plan to pass Congress using a fast-track procedure that doesn't require Republican support. The Senate spent Thursday voting on amendments to the resolution.

Rep. Kevin Brady, R-Texas, predicted the committee would likely finish its work in about two days next week. GOP lawmakers may decide to push legislation that provides tax credits for producing medical equipment, medicine and other needed materials to fight the virus in the U.S., rather than importing products from overseas manufacturers, Brady said.

He said Republicans plan to draw attention to how much job creation will result from Biden's proposal. Brady said he's been asking for a clear figures on expected job growth, but hasn't received a specific answer yet.

Among its provisions to combat the pandemic, the Biden proposal would extend federal unemployment benefits and halt foreclosure on federally backed mortgages until September. His plan would also extend paid emergency sick leave, which is funded through an employer tax credit program.

Biden proposed a one-year expansion of refundable child care tax credits so families could get a reimbursement of half the cost for children up to age 13. He proposed a credit of up to $4,000 for one child or $8,000 for two or more children, but the benefit would phase out for families making $125,000 to $400,000 annually.

The proposal includes sending a third round of economic stimulus payments to Americans in the amount of $1,400. That's in addition to the $600 checks already sent in December and the $1,200 checks approved by Congress in March. Those payments went to individuals with incomes of $75,000 or less and couples with incomes of $150,000 or less.

Senate Republicans met with Biden this week to garner support for a smaller relief bill with less generous payments of only $1,000 per individual, targeted to those with lower incomes than the president proposed. Republicans proposed $1,000 payments for individuals that would begin phasing out at incomes above $40,000 and be capped at a $50,000 income level. For joint filers, the checks would begin phasing out at those earning $80,000 and would be capped at $100,000.

Senate Finance Committee Chairman Ron Wyden, D-Ore., rejected the GOP offer as well as second proposal that Biden is reportedly considering that would target $1,400 checks to those individuals earning under $50,000 and checks of $2,800 to married couples earning less than $100,000.

"I'm always willing to listen, but I'm opposed to it," Wyden told reporters. "The people who got the first two checks, a lot of them are really hurting and have bills piling up, and tell me they're trying to pay their car insurance. They're expecting a third check."

In remarks during a virtual tax conference hosted by Bloomberg on Thursday, Wyden said millions of Americans are "walking an economic tightrope" trying to balance their food, fuel and medical bills.

"So I hope that we're talking about weeks, rather than months" to pass relief legislation, he said.

Once the pandemic bill is complete, Wyden said he would turn his attention to making sure that wealthy corporations and individuals paid their fair share of taxes.

He expects the Senate Finance Committee to work on Biden's plan to raise the corporate tax rate from the current 21%, but not lifting it as high as the 35% rate prior to the 2017 tax overhaul

Wyden said he will focus his attention on international tax issues, including protecting U.S. technology companies from digital taxes now under consideration by the Organization for Economic Cooperation and Development.

He said the outcome of the OECD talks has to be nondiscriminatory toward U.S. companies. Wyden said many countries see the U.S. technology industry as worldwide leaders and he plans to stop them from targeting these companies with digital taxes.

"We're not going to allow them to just target American companies because they know that they're world leaders in the tech space," Wyden said. "We're not going to let them just continue to try to extract revenue in a discriminatory way from them."