A looming Senate battle over plans to move a proposal for a $15 hourly minimum wage in President Joe Biden's $1.9 trillion pandemic response will play a key role in shaping the 2021 federal tax agenda on Capitol Hill. 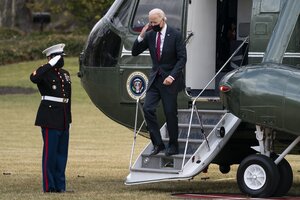 Whether or not President Joe Biden reaches an agreement on a smaller pandemic response package, several senior Democrats said they would push to advance a proposal for a higher minimum wage in an emerging reconciliation bill. (AP Photo/Evan Vucci)

Democrats are laying the groundwork to move a proposal to raise the federal minimum hourly wage to $15 from $7.25 — along with other parts of Biden's American Rescue Plan — in an emerging filibuster-proof reconciliation bill to get around Republican opposition to contentious items.  A reconciliation bill can be passed with a simple majority but is restricted by a Senate requirement to items that will have a significant budgetary impact.

completed in December and the Coronavirus Aid, Relief and Economic Security Act

But many Democrats have argued instead for a more ambitious reconciliation bill to advance Biden's plan and expedite delivery of pandemic aid and incentives to families and businesses. They contend the $15 minimum wage should qualify for inclusion in a budget reconciliation bill with other potential add-ons because it will have a significant impact on federal income and payroll taxes, and demand for certain federal benefits.

But Republicans have countered that the proposal would have only a modest, indirect effect on federal taxes and spending and should be excluded from a reconciliation bill. In any case, GOP lawmakers have argued that states should decide whether to raise their own wage standards.

Whether Biden reaches an agreement on a smaller pandemic response package or not, several senior Democrats said they would push to advance a proposal for a higher minimum wage in an emerging reconciliation bill that is being framed in a fiscal 2021 budget resolution in both chambers this week.

A showdown Senate procedural vote would likely decide the scope of the reconciliation bill and could have a big impact on the 2021 federal tax agenda. A victory by liberal advocates would clear the way for moving the proposal to raise the minimum wage and tax incentives for working families in the reconciliation bill. A loss would divert the minimum wage proposal into a regular-order bill subject to a 60-vote threshold in the Senate.

Sen. Bernie Sanders, I-Vt., chairman of the Senate Budget Committee, said he was determined to move S. 53, a proposal to raise the minimum wage to $15 from $7.25 by 2025, in a reconciliation bill. Sanders said he would try to expedite such legislation by seeking a ruling from Elizabeth MacDonough, the Senate parliamentarian, that the proposed higher wage standard is eligible for a reconciliation bill and exempt from procedural hurdles on the Senate floor.

MacDonough was not immediately available to comment on how she would handle the request by Sanders and other Democrats for a ruling.

"I think we're in good shape," Sanders told Law360. "In terms of reconciliation, I think the argument is that raising the minimum wage is going to have a profound impact on the budget, across the budget."

He said the parliamentarian should take into account economic studies and new analytical gauges such as dynamic scoring, which considers the macroeconomic effects of policy changes on revenue, to decide what items can be moved in a reconciliation bill.

For example, he pointed to a study by Michael Reich, a professor of economics at the University of California, Berkeley, which found that Sanders' proposal for a higher minimum wage would produce a positive effect on the budget of $65 billion per year, including $1.8 billion in increased federal income taxes, $19.4 billion in increased payroll taxes and $44.2 billion in reduced spending on certain federal benefits.

If MacDonough does not give a green light to his proposal, Sanders made clear he might try to contest the decision. He would have the option of requesting a Senate procedural vote to waive an expected GOP-backed procedural objection, known as a Byrd rule point of order, which is designed to torpedo any reconciliation provision that has only an incidental fiscal impact.

Such points of order can only be waived by a 60-vote Senate majority. But Democrats also would have the option of using a procedural maneuver known as the "nuclear option" to reshape Senate rules to exempt a proposal to raise minimum wage from procedural hurdles if all 50 members of the Democratic caucus join together and Vice President Kamala Harris casts a tie-breaking vote.

Sanders stopped short of saying whether he would seek the use of the nuclear option to advance the minimum wage proposal. Several senior Democrats said party leaders and administration officials had not decided how far the party would go in trying to remove procedural roadblocks to a change in the minimum wage.

A White House spokesman was not immediately available to discuss whether the administration would support the use of the nuclear option.

On the other side, several senior Republican lawmakers said they were determined to block any push by Democrats to move a higher minimum wage in a reconciliation bill.

Sen. Chuck Grassley, R-Iowa, a senior member of the Finance Committee, said he was confident that MacDonough would reject Sanders' bid to include the minimum wage rise in a reconciliation bill, setting the stage for a showdown vote on whether to waive the parliamentarian's ruling.

"I think someone would raise the Byrd rule, and they wouldn't be able to do it," Grassley told Law360.

of so-called budget triggers to initiate spending cuts and tax increases to curb the deficit in the event the law failed to generate projected growth and revenue.

Similar concerns prevented Republicans from including in the tax overhaul a proposal to end the longstanding restriction in the 1954 tax law,

known as the Johnson Amendment, which bans participation by churches and other tax-exempt groups in political campaigns.

Sen. Rob Portman, R-Ohio, a Senate Finance Committee member and a former director of the Office of Budget and Management, said Republicans would make the case that an increase in the minimum wage does not belong in a reconciliation bill.

"The parliamentarian will rule it out of order because it doesn't have a substantial impact on the budget," Portman told Law360.

He also said Republicans would try to rally opposition to any attempt by Democrats to override a ruling by the parliamentarian or to weaken Byrd points of order.

"We Republicans respected reconciliation. It would essentially be getting rid of the Byrd rule," Portman said.

Despite such concerns, Sen. Ben Cardin, D-Md., a senior member of the Finance Committee, said he believed there was a good chance Democrats would move a proposal to raise the wage standard in a reconciliation bill. But he said it was unclear how far party leaders would try to go to reshape Senate procedures in order to advance a plan to raise the minimum wage and related proposals, such as tax incentives for small businesses.

"We expect that what we put in the bill will be OK from the parliamentarian's point of view," Cardin told Law360.

Democrats are hoping to use the second reconciliation bill to move components of a pending Biden economic recovery plan, and could also look to move a range of proposals to tweak provisions of the 2017 tax overhaul, provide incentives to working families and raise taxes on corporations and wealthy taxpayers.

For now, Democrats have set aside efforts to use the nuclear option to eliminate filibusters, in part because such a change has been opposed by several centrists, including Sens. Joe Manchin, D-W.Va., and Kyrsten Sinema, D-Ariz.

And the idea of using the nuclear option has gotten a cool response from several undecided Democrats.

"I'm not agreeing to any of that stuff yet," Manchin told Law360.