Tax practitioners who filed amended returns, late filings and payments by mail for clients say they are encountering delays in the documents' processing by the Internal Revenue Service, resulting in automatic — and startling — notices of deficiency. 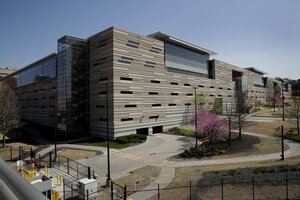 The Internal Revenue Service facility in Kansas City, Missouri, like other IRS offices around the country, was closed for part of 2020 because of the novel coronavirus pandemic. (AP Photo/Charlie Riedel)

The IRS deserves credit for all the work it's already done in light of the novel coronavirus pandemic, said Igor S. Drabkin, a principal at Holtz Slavett & Drabkin APLC. But according to him, a delay in processing these late-filed returns or payments, which can often amount to many months, is triggering automatic and threatening collection notices.

"Obviously it makes the taxpayers uncomfortable, not seeing the checks cleared" for a tax payment, Drabkin said. "Because the payment is not in the system or the tax return isn't in the system, the automated collections continue to generate these balance due notices that are being sent to the taxpayers."

IRS Commissioner Chuck Rettig recently said the Internal Revenue Service had cleared a backlog after the pandemic and the workplace restrictions that resulted held up millions of pieces of mail.

Drabkin said disruptions in operations back in the spring left correspondence piling up because many IRS personnel were working from home and unable to process mailed tax returns and checks. He said almost all the revenue officers he deals with on collection matters acknowledge that returns are being processed with a long delay and they recommend making any payments electronically, since the processing of check payments is lagging behind, he said.

For example, Drabkin had a client for whom his firm submitted a 2019 return in the middle of August 2020, which was not processed until Dec. 28. In the meantime, the IRS assessed late payment penalties on Oct. 15, which was when the return extension was due, and didn't reverse the late payment penalties until Dec. 28, when the return and payments were finally processed.

Other examples of amended returns and payments that are still pending include an active case with potential criminal tax implications that involves an amended return filed by certified mail on Nov. 10, 2020, that is still not processed, Drabkin said.

The processing delays also affect setting up installment plans to pay taxes due, he said. If the current tax return or payment isn't being processed, that information won't be in the tax system, which hinders an individual from entering into an installment agreement.

While the IRS does allow collection freezes and delays of any collection enforcement for 60 days on a legal representation that the client has filed the tax return, that results in a representative having to call every 60 days to get a new freeze put in place if the return or payment still isn't processed, he said.

One potential solution to this processing problem could be for President Joe Biden to give IRS operations higher priority with respect to his coronavirus agenda, because it is going to become a critical issue for the upcoming tax season, which was pushed back to start Feb. 12, Drabkin said.

"I really believe that more money and funding would help," he said. "Maybe the administration can instruct or work together with the IRS and work out the logistics and proper COVID procedures that would allow more people to go to work or process the tax returns faster." Drabkin referred to COVID-19, the respiratory disease caused by the virus.

For example, Losi said he has two clients who are attorneys and are majority shareholders at a law firm that filed amended returns for 2018, which had large refund claims. His clients elected to apply those refund claims on the amended Form 1040X to the subsequent tax year, 2019, he said.

Such applied refunds are generally treated as overpayments, which can be applied to the future year, he said. However, the IRS is now sending letters of deficiency for his clients' 2019 tax liability because the agency doesn't have the 2018 overpayment in the account system yet, Losi said. He said the IRS should update accounts and apply refunds correctly and stop sending notices of intent to levy, which are automatically sent after 30 days.

"Just because the mail is opened doesn't mean your account is updated," Losi said.

Losi said when he tried to address his clients' problem by calling the IRS' practitioner hotline, many of his attempted calls were dropped, which makes it hard to resolve the incorrect notices. For one client, Losi said he tried calling 15 times over three days. While he finally got through, the other times he tried calling he received a courtesy message explaining that call volume was high, with instructions to call back later, he said.

"If you're going to assess [notices of deficiency or penalties], please make sure you have an adequate number of people to respond and address when taxpayers call," Losi said. "[And] hire more qualified agents to process filings."

Or the IRS could simply put a pause on collections, he said.

The national taxpayer advocate announced in a recent report that the pandemic had made customer service worse for taxpayers. The IRS received about 100.5 million telephone calls in fiscal year 2020, and survey results showed most taxpayers wanted wait time to improve, according to the report, which pointed to inadequate IRS funding and staffing shortages.

Abbey B. Garber and Lee Meyercord, tax partners at Thompson & Knight LLP, both said they had clients facing problems due to processing delays. The issues for Garber's clients predate the pandemic while Meyercord's problems arose during it, they said.

Meyercord said she had a client with significant carryback losses that generated a refund, and the client filed amended returns for two different years. One was sent in early October and another in early November. At the end of November, the November amended return was received and assigned to a revenue agent for review, but as of late January the IRS still had no record of the October filing, she said.

"If you're all caught up, then why hasn't my client received the refund?" Meyercord said. "Or why hasn't it shown up in the system as received? I understand a refund can take three to four months to be received but we haven't even received notification that they received the amended return."

Losi said that when he has called about an amended return that the IRS has no record of, he has sent a copy of the certified return receipt that shows the IRS office that accepted the mail along with a signature. This usually results in a successful request to put a hold on the account, which can vary from six to nine weeks depending on the agent, he said.

"If they grant a hold, they'll put a hold and won't pursue collection," he said. But "I'll just have to call them again in another six to nine [weeks] and get another hold."

Garber said one of his clients filed amended returns in October 2019, long before the pandemic. The return was received and it shows up on transcripts, but 15 to 16 months later there has been no refund, nor has the case been assigned for audit, he said.

In Garber's case, the IRS received his client's amended returns, but the current status of the refund is still unknown and Garber doesn't know when he'll get any more information, which "is extremely concerning," he told Law360.

Garber, who served in the IRS Office of Chief Counsel for more than 30 years, said the delay is not good for the government because when it ends up paying the refunds it will also have to pay interest, which could be significant.

Meyercord said she'd feel better if she just had more information about what was going on at IRS service centers because it would help manage expectations.

"If I had more information like that I'd feel more comfort, but as it is now, with them saying we're all caught up and having it not show up in the computer inspires no confidence."

When asked for comment, an IRS representative pointed to an update posted Tuesday on the agency's website on its operations during the pandemic, saying the IRS is now opening mail within normal time frames and has made progress in processing returns. As of Jan. 29, there were 6.7 million individual tax returns in the processing pipeline, the IRS statement said. A previous statement, posted Jan. 29, said there were 6.9 million returns in the processing pipeline as of Dec. 25.

The statement also said that for individual and business tax returns and amended returns, the IRS is rerouting some returns and correspondence since some locations are behind in processing them, and that there may be delays due to a mistake or missing information, or because of suspected identity theft. How long someone will have to wait will depend on where the tax return was sent and where it is in process, the statement said.

Glenn Newman, a shareholder at Greenberg Traurig LLP, said it is important that these delays get sorted because problems processing federal tax returns can affect state returns, too.

"Anything the IRS does that is backlogged will cascade through the state processing and administration as well," he said.

When people file their amended federal tax returns, they're often required to file amended state returns, but Newman said most people want to know whether the federal return has been processed or accepted before they file the state return.

Some states require amended returns to be filed 30 days after the federal amended return is filed, but that deadline can also be 60 or 90 days, depending on the state, Newman said. The delay in processing the federal return can be tricky if the filer wants to abide by the laws of the applicable state, he said.

"You might have to file another state return if the federal return isn't processed [or] you may have to amend that state return again, which is just adding time and distraction and difficulties," Newman said. "It's a burden for no purpose."