Senate lawmakers on Saturday passed an amended version of President Joe Biden's novel coronavirus pandemic relief plan, clearing the $1.9 trillion bill to return to the House for consideration after putting its stamp of approval on several tax provisions. 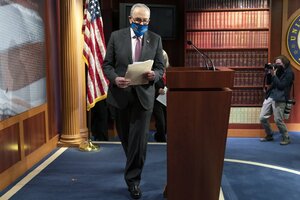 Senate Majority Leader Chuck Schumer, speaking about the $1.9 trillion American Rescue Plan bill Friday, said, "We are not going … to be timid in the face of big challenges." (AP Photo/Jacquelyn Martin)

The Senate voted 50 to 49 to approve the American Rescue Plan, or H.R. 1319, a bill that would provide $1,400 economic stimulus payments for individuals, enhanced tax credits for working families, tax incentives for businesses and their employees and help for financially troubled pension plans, among other relief.

Swift Senate action is seen as key to congressional Democrats' efforts to send the pandemic relief legislation to the White House before March 14, when federal jobless benefits signed into law in December will expire. The House, which approved the measure Feb. 27, plans to vote on the Senate-passed legislation Tuesday.

"We are not going to make the same mistake we made after the last economic downturn, when Congress did too little to help the nation rebound — locking us into a long, slow, painful recovery, where it was years before employment was back to where it was before that crisis," Schumer said in a floor speech. "We are not … going to be timid in the face of big challenges."

GOP lawmakers said Democrats miscalculated by including unnecessary spending in the bill that had nothing to do with combating the virus, helping community health care systems or delivering vaccines to Americans.

"No question that the less than 10% of this bill that relates specifically to COVID could have been passed" by voice vote in the Senate and signed into law on Jan. 21, the first full day of the Biden administration, Sen. Roy Blunt, R-Mo., told reporters. "This is just seeing an opportunity, seeing a moment of crisis and trying to get the most out of it you can."

The floor debate and voting on amendments hit a roadblock Friday afternoon as Democrats worked to shore up support from Sen. Joe Manchin, D-W.Va., for extending jobless benefits until this fall at $300 a week, or $100 less than what the House approved. Lawmakers voted 50-49 to approve an amendment offered by Senate Finance Committee Chairman Ron Wyden, D-Ore., to extend $300 weekly jobless benefits through Sept. 6 and make those benefits partially exempt from taxation.

The agreement would exempt $10,200 in unemployment compensation from taxation for individuals with adjusted gross incomes of $150,000 or less, for tax years beginning in 2020, according to a copy of Wyden's amendment obtained by Law360.

limit on business losses for non-corporate taxpayers, which was enacted under the 2017 Tax Cuts and Jobs Act

"My goal throughout this process has been to secure the strongest possible package for jobless workers that could pass the Senate," Wyden said. "This agreement continues the $300 weekly boost, extends benefits longer than the House proposal, and provides much-needed relief to jobless workers being hit with surprise tax bills without any way to pay them."

During the past several days, Senate Democrats have been meeting behind closed doors to discuss changes in the virus relief measure to shore up the necessary 50 votes to win passage under expedited budget rules. A tie-breaking vote from Democratic Vice President Kamala Harris was unnecessary because Alaska Republican Dan Sullivan was not in Washington, D.C.

Under the Senate Democrats' substitute amendment to the bill introduced on Thursday, the $1,400 stimulus payments from the Internal Revenue Service would go to individuals with adjusted gross income of $75,000 or less and be phased out at the $80,000 income level, according to a summary provided by an aide of the Senate Democrats. Couples with adjusted gross income of $150,000 would qualify for the checks, with a phase out at $160,000.

The Senate bill would not allow the stimulus checks to go to nonresident alien individuals, estates or trusts and certain dependents.

The House bill includes higher phase out limits of $100,000 for individuals and $200,000 for couples. The change would drop the cost of the stimulus check from $422.3 billion over the next decade to $410.6 billion, according to a new estimate from the Joint Committee on Taxation.

The JCT estimated that the tax provisions in the Senate bill would total $589.6 billion compared with $585.6 billion for the House version of the legislation.

Other tax changes in the Senate Democrats' bill would allow payroll tax credits to reimburse paid sick and family leave made by employers under union contracts, according to the summary.

The bill would provide $350 billion in funding to state, local, tribal and territorial governments that can be used to replace lost, delayed or lowered revenue from the pandemic. It would send $20 billion to tribal governments to use for direct COVID-19 relief for personal protective equipment, internet access, telemedicine, clean water and electricity development. It also would allow the Pension Benefit Guaranty Corp. to provide direct assistance to roughly 200 financially struggling union pension plans.

Update: This story has been updated to include the planned House vote on the bill and details of the unemployment tax provision.