As teleworking evolves from necessity to norm, companies with long-term remote workers abroad are facing the expiration of countries' taxation grace periods — offered at the start of the novel coronavirus pandemic — and, in their place, potentially nebulous cross-border tax complications. 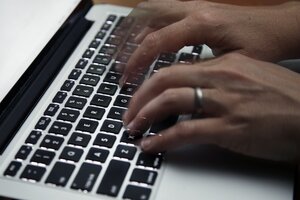 Companies with workers who are still logging in from different jurisdictions could face a cloudier tax situation if a given country's pandemic relief no longer applies. (AP Photo/Elise Amendola)

In March 2020, countries around the world closed their borders in an effort to slow the spread of the virus after the World Health Organization characterized the outbreak as a global pandemic. For telecommuters stranded in countries where they didn't usually conduct business, their employers could take comfort in guidance offered by the U.S. and other jurisdictions that said these emergency circumstances generally wouldn't create a new taxable corporate presence.

A year after the WHO's pandemic declaration, many employees remain untethered to their offices as remote work becomes normalized. Companies with teleworkers who are still logging in from different jurisdictions could face a cloudier tax situation if a country's emergency relief no longer applies. Depending on the circumstances, that company could now owe withholding taxes and other levies in the country — and for foreign businesses with workers in the U.S., the related guidance may not always be clear.

Companies are in the difficult situation of embracing remote work without any indication that tax authorities plan to update guidance, according to Richard Tonge, a principal at Grant Thornton LLP.

"It's a strange position to be in, because a lot of companies are doing this at a point where the tax risk in doing so may be going back up," he said.

In the year since the WHO issued its pandemic declaration, the notion of temporary teleworking has evolved into a more permanent aspect of some corporate cultures. This change was cited by tax executives who spoke during a conference in February, hosted online by the Tax Council Policy Institute, where they discussed cross-border situations that were initially caused by pandemic travel restrictions and have transformed into personal decisions.

As Tonge sees it, remote work is here to stay.

"The pandemic has shown over the past year that for so many businesses who may otherwise have thought remote work wasn't for them … they have been able to be successful, their employees are agile and robust," he said. "And the business can function this way."

Meanwhile, the tax relief that countries provided in the early days of the pandemic generally covers only cross-border teleworking scenarios that are specifically related to COVID-19, the respiratory disease caused by the virus.

In the U.S., for example, last April the Internal Revenue Service outlined a "COVID-19 emergency" period between Feb. 1 and April 1, 2020. If a foreign company had an employee who was stuck in the U.S. for 60 consecutive days beginning during that time, the worker's activities wouldn't determine whether the company was engaged in a U.S. trade or business, according to the IRS.

Similar guidance from the Organization for Economic Cooperation and Development, also issued last April, said people working in different countries because of the pandemic weren't likely to create new tax obligations for their employers under global treaty rules. That Paris-based organization updated its guidance in January, reiterating that when employees work from home in compliance with public health measures to contain the virus, those individuals won't create a new taxable presence — known as a permanent establishment — in the country where they work.

To the extent that some of these work patterns continue even after the pandemic restrictions are relaxed, the OECD guidance likely won't apply, according to David Noren, a partner at McDermott Will & Emery LLP. If the remote work becomes fairly fixed and habitual, companies will need to figure out how to adapt their arrangements, including a consideration of revising the formal guidelines on the activities that certain employees can carry out, he said.

"I think it's going to be a really important and sort of murky set of issues for some time," he said.

The determination of a company's permanent establishment abroad is based on the tax treaty between its home country and the jurisdiction in question. According to the U.S. model treaty, which the U.S. Treasury Department uses as a template for its bilateral tax agreements, a permanent establishment is "a fixed place of business through which the business of an enterprise is wholly or partly carried on."

A permanent establishment could be created by a person acting on behalf of a company who "habitually exercises … an authority to conclude contracts that are binding to the enterprise," according to the model treaty.

The tax implications of having a permanent establishment will vary by country, but they could involve corporate filing obligations and attribution of profit to that jurisdiction, according to Tonge at Grant Thornton. The employment of someone working at a permanent establishment, or PE, could also involve payroll registrations, withholding taxes and social security costs — obligations that may be disproportionate to the situation, he said.

For businesses with just a handful of employees in these remote work situations, that level of compliance "is just going to be unacceptable," Tonge said.

As for the specific activities that could lead to corporate tax obligations in another country — through a permanent establishment under a tax treaty or a taxable presence under domestic laws — there are few general contours.

Patrick McCormick, a partner at Culhane Meadows PLLC, noted that each situation is country-specific. However, activities related to generating income, such as entering into sales contracts, are more likely than support activities to trigger additional tax obligations, he said.

"The easier it is to directly trace an activity to income, the more likely it is that you're ultimately going to have heightened tax requirements in that jurisdiction," he said.

With these general principles in mind, businesses can usually outline operations for certain remote activities while remaining careful about the heightened risks in a country, according to McCormick.

In a similar vein, Tonge said companies could limit the type of work that remote employees carry out, including the negotiation of contracts or the undertaking of business in a country's market. Where there's domestic nuance, he said, it's a situation that companies could prospectively manage.

"I think what we're seeing a lot of companies do is move towards formalizing remote work policy where tax is a significant input to the parameters under which you can work remotely," he said.

He added that companies "have the ability to respond to those domestic thresholds — either on a per-country basis, or just more broadly — in terms of what is acceptable in terms of the remote work arrangement."

A U.S. Trade or Business

In addition to the tax issues associated with permanent establishments, foreign companies with workers in the U.S. have to consider whether those employees are creating a U.S. trade or business, or USTB, in the eyes of the IRS.

According to agency guidance, foreign individuals are usually engaged in a USTB when they perform personal services in the U.S. or own and operate a business in the U.S. "selling services, products or merchandise."

"Whereas U.S trade or business, it's a concept that's not articulated in a lot of detail in the code or regulations," he said.

Anything that's at the core of a company's profit-making activities is probably going to mean it has a USTB, which typically puts it in the same spot that the permanent establishment concept would, Noren said.

Meanwhile, foreign companies with long-term remote employees in the U.S. aren't likely to see additional guidance from the IRS any time soon.

After the agency outlined the tax relief related to COVID-19 travel restrictions in April, officials from the IRS and Treasury said there were no plans to provide additional guidance. Jim Wang, an attorney adviser with Treasury, explained the government's reasoning during the American Bar Association Section of Taxation's fall meeting in October.

People who couldn't leave the U.S. because of the pandemic didn't know whether staying in the country "would jeopardize their entire tax position," but now people have a better sense of what's going on and how to plan their affairs, he said.

A representative of the IRS didn't respond to a request for comment on this article.

If a foreign company stumbles into a USTB, some of its income will be deemed to be effectively connected to that USTB and becomes taxable at the normal U.S. rates, according to Noren. If a company didn't realize it had a USTB and missed filing deadlines, it might not be able to use deductions to reduce its effectively connected income, he said.

Accordingly, Noren said, "the exposure can be fairly harsh on the U.S. side."