With Massachusetts' lawsuit-instigating rule that sources compensation of nonresidents who work for Massachusetts companies to the state for personal income and withholding taxes, the state sought "a broad-based rule that would retain the status quo," a top official said Monday. 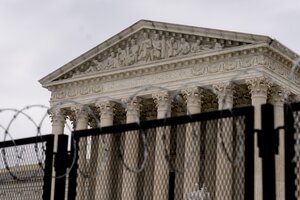 The U.S. Supreme Court has been asked by New Hampshire to strike down a Massachusetts regulation that sources employees' income to Massachusetts even if they are teleworking from another state because of the pandemic. (AP Photo/Andrew Harnik)

Michael Fatale, deputy general counsel for the Massachusetts Department of Revenue, said the rule keeps things as they were pre-pandemic both for Massachusetts residents and for nonresidents. Fatale was speaking at an annual tax conference sponsored jointly by the American Bar Association and the Institute for Professionals in Taxation, held online.

Fatale commented on the rule 10 days after it was finalized and as it is undergoing litigation at the U.S. Supreme Court. Top state revenue officials, who created the rule, have rarely made public comments on it, typically leaving that task to a department spokeswoman.

New Hampshire, which has no personal income tax, has sued Massachusetts in the nation's highest court because the rule extends taxation on New Hampshire residents who are now working from home because of the pandemic. New Hampshire contends Massachusetts has violated its residents' rights by taxing them after they chose to live in a no-income tax state.

But speaking Monday at the conference, Fatale said nothing has changed.

At the conference, where he was part of a panel of state tax administrators, Fatale also commented on other tax litigation Massachusetts is involved in. In one of the first rulings by a state high court on the taxability of cloud computing, the Massachusetts Supreme Judicial Court found in February 2020 that Citrix Systems Inc.'s webinar and screen-sharing subscriptions are subject to sales tax.

The court sided with Massachusetts, finding that the subscriptions fit a 2005 amendment to state statute expanding the definition of tangible personal property to capture a wide range of software transactions and 2006 state regulations taxing "transfers of rights to use software installed on a remote server."

Fatale said the decision clarified that transactions were taxable, but said the state will put out additional guidance on the matter.

"The question that remains is whether what you're doing is in fact acquiring software as opposed to engaging in some form of service transaction" when accessing software from the cloud, Fatale said. "There continue to be questions around that, and the state is looking to put out additional guidance."

Meanwhile, Fatale suggested the state would likely appeal another decision in which the state Department of Revenue lost before the Massachusetts Appellate Tax Board in January. An online auto parts company scored an initial victory there over the state tax agency's enforcement of an economic nexus regulation put in place before the U.S. Supreme Court's landmark Wayfair

In a one-page statement, the tax board said it had granted summary judgment to U.S. Auto Parts Network Inc. in a dispute with the state regarding the department's so-called cookie nexus regulation. A more detailed report on the findings of fact will be forthcoming.

"We know we lost; we don't know the reasons," Fatale said. Upon receiving and reviewing the findings of fact, he said, "it is possible or likely that [the case] will continue on appeal."