3 Questions State Tax Pros Have About The Pandemic Relief Law 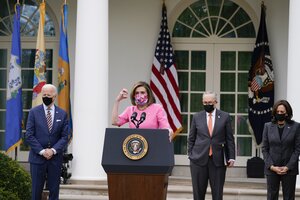 's provision prohibiting states from using the federal cash infusion to "either directly or indirectly offset … [states'] net tax revenue" ties their hands when it comes to tax-cutting measures, including tax incentives.

Some state tax professionals are also concerned about how states will handle conformity to certain parts of the law, particularly the exclusion of up to $10,200 in unemployment benefits for some taxpayers. Others, meanwhile, are wondering whether there will be movement on a big issue that was widely expected to be used as a negotiating point for passage of the law, but is nowhere in sight — the $10,000 cap on the deduction for state and local taxes paid.

Does the ARPA Stop States from Cutting Taxes?

Policymakers and state tax specialists noticed almost immediately that if states want to take full advantage of the $350 billion cash infusion the ARPA gives state and local governments, it appears they are going to have to give up some autonomy. While those who spoke to Law360 said only explicit guidance from the U.S. Treasury, which is still forthcoming, can make it completely clear, the consensus is the law appears to prevent states from cutting taxes. If states do cut taxes, starting from March 3 of this year up until the time that the stimulus money is spent, they will be required to give up the equivalent amount in stimulus, state tax professionals said.

"I think this is a big deal," Carl Davis, research director for the Institute for Taxation and Economic Policy, told Law360. "It has the potential to dramatically reshape state tax debates for the next couple of years."

"Congress was pretty clear that this aid is really supposed to help states address the multiple pressures they face as part of the pandemic," Johnson said. "It was never intended to pay for state tax cuts."

Johnson called the move "novel and important," saying he has not seen the federal government take such a step before. He added that Treasury will have to step in to let states know what they can and cannot do.

That is not at all clear at the moment. Congress laid out a few broad categories of approved spending measures, including direct pandemic spending aimed at state economic recovery or public health, and certain infrastructure spending such as water, sewer and broadband, noted Scott Roberti, managing director for indirect tax at EY. And it put in language forbidding the use of the money for state tax cuts or for deposit into pension funds. But that raises as many questions as it answers, Roberti said.

"Can they use the money for economic development activities," such as tax incentives, Roberti said. "I don't know the answer to that. Hopefully there will be guidance from Treasury because I think those are areas states are hyperfocused on as they try to get their economies restarted."

Jared Walczak, vice president for state projects at the right-leaning Tax Foundation, said it seems clear the law seeks to prevent states from enacting "big tax cuts," but agreed there is a lot of nuance that is not explained. States often tweak their tax codes, he noted. They change administrative guidance for existing tax programs. They offer deductions, exemptions and credits. Disallowing all that is a serious federal intrusion into state power, he said.

A group of Republican senators agree. On Monday, Sen. Mike Crapo, R-Idaho, ranking member of the Senate Finance Committee, filed the State Fiscal Flexibility Act, S. 743, to eliminate provisions in the ARPA that would prevent states from using relief funds to cut taxes. Crapo also sent a letter to Treasury Secretary Janet Yellen asking the agency to clarify by March 22 how it will carry out the transfer of funds to states and localities and what guidance it will give.

In a statement Tuesday, Crapo said his state and others should have the right to provide tax relief to its citizens without being penalized.

"This [prohibition on tax cuts] infringes on states' authority to design their own fiscal policies, and invites partisan politics into federal and state relations," he said.

How Will States Conform to Other Tax Provisions?

The ARPA made significant changes to benefits and credits, and enacted a few miscellaneous tax provisions that states will have to pay attention to. Given that the law was passed in the middle of tax season, and many taxpayers have already filed, it is not clear yet when or whether some states will conform.

One of the most notable, tax professionals said, is the exclusion of the first $10,200 in unemployment benefits for those earning less than $150,000 a year.

"That's a big one that I think could impact states," said Patrick Duffany, managing partner of the tax practice at CohnReznick.

Duffany noted that the IRS, in a statement Friday, said those who received unemployment benefits last year that are no longer taxable because of recent pandemic relief legislation but who have already filed their 2020 returns should not amend those filings for now. He said those taxpayers will have to wait and see whether the IRS will automatically provide a refund or if they will ultimately have to file an amended return. That could affect some state income tax filings as well, Duffany said.

Edward Renn, tax partner at Withers LLP, said the exclusion was well-intentioned and is directly targeted to people who have suffered during the novel coronavirus pandemic.

"It's clearly one of the parts of the bill that's actually focused on relieving people most directly impacted by COVID," Renn said. "But [implementation] is going to be a problem."

Typically, taxpayers can assume that states with rolling conformity will do whatever the federal government does, unless they specifically decouple from certain provisions. But that is not necessarily true with the provisions in the ARPA, noted Brian Myers, state and local tax partner at Crowe LLP.

Myers said states may find themselves in the same position they did with Paycheck Protection Loans. Many states still have not decided whether to conform to federal provisions exempting loan money from taxes and making expenses funded by loan money deductible. The same could apply with tax provisions in the ARPA, Myers said, for a reason many people may not realize — the provisions are outside of the Internal Revenue Code. He said a few states have already noticed that and enacted language that includes conformity to the code and other relevant tax legislation.

"You can't just assume that because a state follows the Internal Revenue Code, that it picks up these provisions," Myers said.

What Happened to Repealing the SALT Cap?

One of the notable state and local tax aspects about the ARPA is something that is not in it. There is no mention of the $10,000 cap on the deduction for state and local taxes paid that was a centerpiece of the 2017 federal tax overhaul

. State tax professionals and policymakers had widely speculated that changes to the SALT cap would be included if the Biden administration put forth a large piece of legislation to deal with the pandemic.

Sen. Susan Collins, R-Maine, fueled that speculation with a December proposal to increase the cap for married couples filing jointly. She said at the time that the proposal could be included in legislation aimed at combating the effects of the pandemic. But it appeared neither in the Consolidated Appropriations Act

, signed by former President Donald Trump, nor in the ARPA.

Roberti of EY said that may be too big a lift right now. Congress would need to consider the large fiscal impact of lifting the cap, and if it did, at what income levels.

"I think that's a challenge for Congress and the president, when and if they decide to take that on," Roberti said.

Walczak said it was clear that the president focused on getting the ARPA passed and could not afford to lose a vote from a senator who might be opposed to lifting the SALT cap or who had reservations about it. He said it is not clear that lifting the cap is a priority for Biden.

"Lifting the SALT cap was not part of the president's tax plan while on the campaign trail, and the furthest his team has gone is to say it is something they would consider in the course of deliberations with Congress, which is very different than making it a presidential priority," Walczak said.

Meanwhile, noted Scott Smith of BDO USA LLP, states seem to be proceeding as though the cap is going to stay in place. Every few weeks in the current legislative sessions, another state adopts or considers the one SALT cap workaround so far blessed by the Internal Revenue Service — an entity-level tax on pass-through businesses.

"It appears that states are just moving forward with their own ideas," said Smith, national technical leader for the state and local tax practice. "They have found their own way of responding."

Update: This story has been updated with information about IRS guidance on the exclusion of some unemployment benefits in the ARPA.