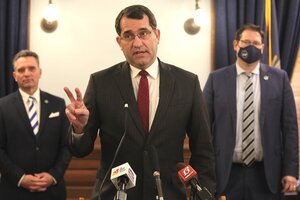 Kansas Attorney General Derek Schmidt was one of 21 Republican attorneys general who asked Treasury Secretary Janet Yellen to weigh in on provisions in the American Rescue Plan that they say could withhold funds for any state tax cuts. (AP Photo/John Hann)

On Tuesday, Yellen sought to downplay the concerns of 21 Republican attorneys general — led by Arizona's Mark Brnovich — who asked Yellen and the U.S. Treasury Department to immediately weigh in on provisions in the American Rescue Plan

that they say could withhold funds for any state tax cuts.

In her response, Yellen said that states could still enact tax cuts provided that they are not offset by federal funds. She added that states that do offset those cuts with federal funds only risk the amount of funds used in the offset, without risking all federal relief.

"If states lower certain taxes but do not use funds under the act to offset those cuts — for example, by replacing the lost revenue through other means — the limitation in the act is not implicated," she said.

The response addresses a federal provision that prohibits states from using the recent $350 billion cash infusion to states to "directly or indirectly offset … [states'] net tax revenue" via state laws, regulations or through rate cuts, rebates, deductions, credits "or otherwise." States that don't comply with the provisions would be required to repay funds equal to the amount of tax cuts they gave.

Yellen defended the limitation as a reasonable funding condition to ensure that federal funds are used to address the public health and economic consequences of the COVID-19 pandemic.

"It is well established that Congress may place such reasonable conditions on how states may use federal funding," she said. "Here, the act provides a broad outlay of federal funds and accordingly includes restrictions to ensure that those funds are properly applied."

Yellen added that the Treasury is crafting further guidance on the provision, including the specific issues raised by the attorneys general and the procedures for recouping federal funds, before the deadline for states to submit required certifications under the act.

The attorneys general said the provision could waylay state tax cut proposals in several states if Treasury interprets the provision too broadly. They also demanded Treasury weigh in with a narrow interpretation or they would take "appropriate action."

Republican Ohio Attorney General Dave Yost went further, filing for a preliminary injunction against the provision in Ohio federal court, arguing it exceeds Congress' authority. U.S. House Republican leaders issued their own letter with questions to Yellen on March 17, asking for clarification and guidance on the provision and requesting a reply by March 26.

"Taxpayers and tax policy makers need answers to a whole world of questions that have not yet been addressed by the Secretary," Stephen Kranz, tax partner at McDermott Will & Emery LLP, said in an email to Law360.

In a letter sent to the Treasury on Wednesday, Kranz requested that official guidance on the provision provide exceptions to federal funds clawback for specific state actions that could result in a reduction in net tax revenues, including conformity to the Internal Revenue Code and previously announced law changes.

"We are hoping to jump-start that process by suggesting areas we think should be excluded from the impact of the federal limitation," Kranz said.

Richard Pomp, a tax professor at the University of Connecticut School of Law, said that while he supported conditioning relief for states that could not afford to cut taxes, formal guidance was still needed to determine how federal funds offset reductions in net tax revenue.

"Money is fungible," Pomp said. "There's a tracing problem: How're you going to trace the money that was received from the federal fund from all the funds received by state sources of revenue?"

Steve Irwin, press secretary for Yost, referred Law360 to the attorney general's article in the National Review. There, Yost reiterated several claims in his suit without directly addressing Yellen's letter, saying that his suit was not about cutting taxes but instead questioned the federal government's authority to use funds to dictate state policy.

The Republican Attorneys General Association referred Law360 to a statement by Georgia Attorney General Chris Carr, a co-signer of the letter to Yellen, who said the coalition will be monitoring how Treasury addresses its concerns so the states' ability to enact tax measures is not compromised.

"Treasury's response signals that our coalition was right to fight this unprecedented attempt at federal takeover of state policy," Carr said in a statement shared with Law360 on Thursday. "In the letter, Treasury provides some assurance and promises to more specifically address the issues we raised."

The offices of Treasury and Brnovich were not available for comment.

Update: This story has been updated with comment from Carr.